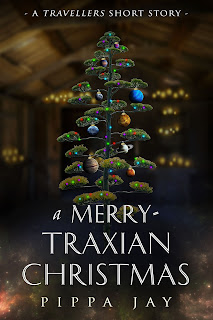 A Merry-traxian Christmas (Redemption Book 2.1. Part of the Travellers Universe)

As winter deepens on the tropical isle of Kasha-Asor, Keir and Quin find themselves in a somber mood, adrift in nostalgia. So begins a quest to recapture past happiness as each takes a different path to find new ways to celebrate their good fortune. But can distant memories really be revived on an alien world far removed from all they knew?
​
A Science-Fiction short story and Book 2.1 of the Redemption series. Part of the Travellers Universe. Released 18th December, 2019.

Available in all digital formats from Amazon, Kobo, Barnes & Noble, and iBooks. Read the reviews at Goodreads.


Sal, a legal carrier (just about) of whatever comes her way, puts her trust in just two things: her guns.

Keeping out from under Imperium eyes—especially those belonging to a certain Ehi Wahu—while making a living, and trying to keep a lover who can tolerate her twitchy trigger fingers, are the extent of her ambitions.

Then a kiss from a passing stranger, and a promise of the biggest score in a long time, tempt her. Devin fulfils more than one need, but he comes with more trouble than one woman can handle. And this time it'll take more than her guns to save her. She'll have to trust a man again.

How far would you fall for love?

Centuries ago, guardian angel Lucien committed a terrible sin. He gave in to his own desires and revealed himself to the mortal woman he'd been charged to protect. By kissing her, he condemned himself. Torn of his wings and his angelic powers, thrown down into the City Below, Lucien now serves Satan as an incubus who claims souls for his master from the City Above, and who feeds on the energy stolen from his mortal lovers. Dark, sexy, and charming, he's been top of his league for decades uncounted.

Until His Infernal Highness decides to send Lucien looking for a lost angel. Lucien has no idea what he did to deserve such a punishment, since the touch of an angel could destroy him. Yet the challenge and the potential kudos of seducing one of his former heavenly kin leads him on.

But when he finds the angel, he learns he still has more to lose than his already forsaken soul.

Twelve months ago, Hal’s world crashed and burned, taking the love of his life with it. He’s waited all year for that one special night when the souls of the departed come home, hoping his candle will summon back one in particular to heal his broken heart. But the forbidden knowledge he’s learned could call something far worse, and put more than his own soul at risk...
“Welcome to immortality in utopia!”


From the moment Damien signed up for a perfect life with ReGen Inc., he didn’t ask any questions. He didn’t want or need to know. But after he’s rebooted this time, there are gaps in his memory he can’t ignore, and people he no longer recognizes are accusing him of betrayal. When someone dies, he’s determined to go looking for answers…but sometimes it really is better to forget.
A 2013 Gulf Coast RWA Chapter
Silken Sands Self-Published Star Award Finalist

It was meant to be a romantic getaway for Marie and the love of her life Jaisen; a chance for him to get to know her better after months of her denying him more than a few stolen kisses. Instead, Marie finds herself dumped and alone on Venus Ascendant with no credit for a transmat and the next starship home not due for another hour.

But the all-seeing AI isn’t going to leave anyone aboard the space station with their dreams unfulfilled. Marie's boyfriend might not have made it to the station, but there are others willing and able to take on the role - even if they aren’t entirely human.

WARNING - Not suitable for under 18’s due to adult content.
Myasi has been contracted to demolish a weird metallic construct in the shallow seas of Ulto Marinos. But her attempt to do so reveals something more beneath the surface ...