The Bare Bones of Inspiration

I'd like to thank author Pippa Jay for guest blogging today at Spacefreighters Lounge.  I got to know Pippa through the Six Sentence Sunday exercise, and became intrigued with her thought-provoking and well-crafted excerpts. We've been exchanging thoughts and ideas on writing and publishing ever since.

When I read her recently published short story, I was highly impressed with her visual prose and the dilemma her main character faces, and asked if she'd be interested in guest blogging.

The Bare Bones of Inspiration
by Pippa Jay

Aggrieved sigh from husband. “What?”

“My tutor said that final assignment didn’t count as a short story. Said it wasn’t complete.” Well, a 1500 word limit when I’ve been writing 40K plus for a year was always going to be a challenge.

“What are you worried about then?”

“Well, I wish I could write short stories. I guess I’m no good at them.”

Husband makes a disapproving noise. “Now you sound like our eldest.” Mimics the whining tone of our petulant, eight-year-old daughter. “I can’t doooo it! It’s toooooo hard!”

A few weeks later and I’m sitting on a stony beach with the sun blazing down and a chill wind skimming off the water. The children are throwing pebbles into the estuary, their laughter a distant sound. Behind me, the scraggy grasses clinging to the dunes hiss and whisper loudly as the sea breeze dances through them. Strangely it’s very soothing, if a tad cold. It’s a little like waking up from a deep sleep - - a bit hazy, nothing quite real.


Among the stones and sand lay hundreds of shells, thousands of them. Cockles mostly, though there are plenty of oyster shells, a delicacy for which Mersea is famous and that drew the conquering Romans to ancient Britain. A few whelks, winkles and mussels. Pieces of driftwood. String, odd feathers, bits of sea-smoothed glass and the inevitable tatters of plastic. The Bones of the Sea, I thought, and the thought stuck. I started scooping the shells and smaller pieces of driftwood into a pile. “Darrin?”


“What does ‘Bones of the Sea’ make you think of?” 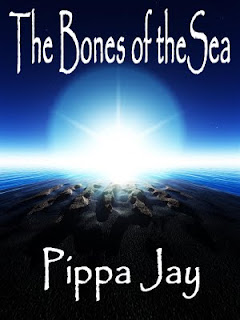 Big curving rib bones at the bottom of the dark, dark sea. I poke some of the sticks of wood into the ground, making a circle into which I pile the shells, working without any real thought. An image comes to mind, the cover of one of my favorite books: Drowntide by Sydney J Van Scyoc. A shadowy figure hovering in murky water. My weird construction looks like bony fingers reaching up out of the sand, with all those empty dead shells in the center. And in among them is the glimmer of an idea, the start of a story. The Bones of the Sea.

Three thousand words later and I have a story. A short story. A moral sci-fi tale tied into the same Universe as my main manuscripts. It’s had 126 downloads so far and four readers have left five-star reviews. People seem to like it. And all it is came from what I saw in a pile of shells and a few sticks on the beach.

So now let me ask you: Where does your inspiration come from? And what’s the weirdest thing that’s sparked an idea for you?
L. A. Green at 3:00 AM
Share