So much movie excitement over the holidays! The long awaited release of Rogue One! (Check out our reviews and commentary during Spacefreighters Lounge Goes Rogue week here.) All the usual fun holiday-themed family fare.

Billed as a bonafide Science Fiction Romance film! With Chris Pratt! And Jennifer Lawrence! What could go wrong?

Well, plenty...IF you believe the blasted critics. Unfortunately, I did...and regretted buying advance tickets to the movie. But since I had them, well...yeah. Might as well drag myself out to the theatre to witness a disaster I'd had such high hopes for.

But, wait! I was absolutely delighted to find those high hopes were completely warranted. Passengers was stunning, exciting, amazing, thought-provoking and the kind of story I'd like to see again and again. It was a genuine SFR...actually, the kind of SFR that I would have been proud to write. And it left me with a smile. Though not a wide, ear-to-ear, "oh, that's wonderful" smile but a sort of a wistful, deep-in-thought sort of grin that comes with a long sigh.

In other words...I totally LOVED this movie! Lesson learned. Always take the critics' reviews with a grain of salt and trust your instincts, Luke.

After all, the critics loved, loved, loved the depressing bit of human drama drudgery titled Arrival. That film tried so hard to be a great sci-fi and romance, and ended up failing miserably to become as depressing a downer as stories come. THAT should have told me something right there. Critics are not looking for the same experience in a film that I am. It may also tell you something. If you also loved Arrival, Passengers may not be your cup of tea.

Here's a look at the trailer (in the event you somehow missed it):


So, let's look at the complaints and I'll add my commentary.

From HotAir.com: Passengers is a romantic non-comedy which happens to take place on a spaceship.

Wrong. First of all, Passengers was never intended to be a romantic comedy (though not to say it doesn't have a few moments of humor) so it's ludicrous to suggest it's even the same species. The film is a romantic sci-fi drama and the plot is intertwined with the setting and situation. The romantic premise in Passengers wouldn't work if the voyage were not a 120-year journey to Homestead II, a new colony on a distant world. This is what sets up the entire romantic dilemma of Jim Preston's (Chris Pratt) hypersleep unit malfunctioning and awakening him some 88 years from his destination--alone and isolated on a ship of 5,000 people who are still blissfully asleep and on course to their destination some eight decades into the future. The ship and its AI is oblivious and uncaring about his predicament, and the intense isolation and loneliness is what eventually drives Jim to near insanity.

Note the key word there...eventually. Jim endures the futility and utter loss of his future for months and then over a year. Meanwhile, he attempts to contact authorities, only to find out it will take 19 years for his message to reach Earth and another 36 for a reply...55 years! He attempts to revive the crew, to no avail. In his state of deep isolation, it's why he ends up seeing, then researching, and eventually falling in love with Aurora Lane (Jennifer Lawrence) while she still sleeps in the cocoon of her stasis unit. It creates the motive for his actions. You couldn't take this premise and apply it to any other time or place. It's not "contrived" and it's not "convenient." It's sci-fi in its purest form.

A few things HotAir.com got right:

From Common Sense Media: "...it all hinges on a decision that one character makes without another's ability to weigh in, removing her ability to make her own life choices."

That's stated as a black mark against the film. And, in fact, some of my peers have been hugely critical of the story because of it, yet this premise is often a standard in romance and in sci-fi romance. How is the premise of Passengers any different than a romance that involves an abduction, a captive element or someone who is put in a situation of having something happen as the result of the actions of another that alters their life? Romance is all about conflict between the hero and heroine that must be overcome, and about seeing and understanding the actions of each character even if you may not agree with them. 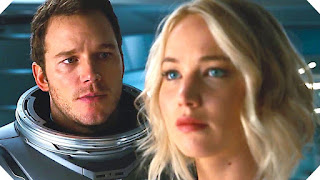 Although I'm not in any way suggesting Jim Preston's actions were justified or right (and he'd say the same himself), what he did he did after months of torment by obsession and near-insanity, as I explained in the HotAir.com commentary above. When confronted by Aurora, he didn't make any attempt to hide or alter his actions, he sucked it up and told her the truth. He was then forced to explain his side of the story the only way he could manage when she turned on him to the point of violence.

Do I understand why she was so angry? Yes. Absolutely. But do I also understand (though I don't condone) why he did what he did...after many long months of pining and longing for her companionship? Totally. Jim Preston experienced deep remorse and guilt over his decision, but he couldn't undo what he'd done. That's what the story was about. Yet I saw several authors who write captive, slave, abduction or "protective custody" sci-fi romances criticize his actions harshly, and totally overlooked the parallels in storylines. Whether right or wrong, loneliness and obsession are overwhelming emotions, and overwhelming emotions can lead us to do things we wouldn't do in normal circumstances. Moral dilemma has always been a mainstay of romance.

What Common Sense Media got right:

From NewYorkTimes.com: "In its haste to tie up loose ends as efficiently as possible, “Passengers” becomes a banal, formulaic pastiche of dozens of other like-minded space operas in which the human drama gives way to technological awe."

Oh, so, SO wrong! I found the film totally engrossing, and the final scenes heart-pounding and suspenseful. As far as being like "dozens of other like-minded space operas," well, yes! Big surprise. Space operas involve drama in space and the overcoming the many dangers inherent in the void and space travel. It's like saying The Heart of the Sea or Master and Commander was formulaic because it took place aboard a sailing vessel and involved struggles with overcoming the wrath of the sea.

Critics also seemed to totally overlook the juxtaposition of the situation Aurora and Jim come to face: In order to save the other 4,998 passengers and 200-some crew aboard the Avalon, Jim must make a decision that will most likely end in self-sacrifice and now it's Aurora who must deal with the horrifying future of spending eternity alone and isolated on the massive ship, only to die long before the voyage ends. The exact same dilemma Jim faced early in the story. Yes, I know what you're thinking. But he revived her, so it's all his fault and now he's going to leave her alone on top of it all!

Think again. If Jim hadn't revived Aurora, he couldn't have dealt with the emergency on his own and she would have died along with Jim and all the other passengers when the ship eventually went supernova. The irony here is that Jim's actions--right or wrong--resulted in averting a complete tragedy and the annihilation of the ship and crew. Call it serendipity. Call it fate. Call it a story well-told.

What the NewYorkTimes.com got right:
Final thoughts:

There's another factor that none of the reviews I read seemed to consider. In one scene, we see Aurora wrapped up in a moment of nostalgia as she views a vid of her friends saying goodbye and their tearful confessions of how much they will miss her.

What some may have missed in the story is that Aurora--daughter of a Pulitzer prize winner and gold star passenger--is a lost and wandering soul. Jim didn't steal her life because she really didn't have one. She left everyone she knew behind to travel 120 years into the future and spend a  year--one year--on Homestead II, only to make the trip back to Earth and arrive 241 years after she departed. Everyone she knew would be long dead on both Earth and Homestead II. The only living acquaintances she'd have are those she made during the months awake on Avalon or its sister ship.

When Jim asked her why she was making the round trip, she told him it was so she could see the future. Wait. What? What about the present? What drove her to leave family and friends on Earth to make a 120-year voyage across the stars? Is it possible Jim saved her from a very bleak and lonely existence by his selfish act? Is it possible he gave her the chance to know and experience deep and lifelong love instead of a lesser fate? Yes, he took away the chance for her to make her own choices--but really, how much control do any of us truly have over the whims of destiny? What's the definition of a happy life?

And as for Aurora being "prisoner" in a luxurious prison with nothing but Jim and video games to occupy her time? Ha, I say! Aurora was a writer. I'm sure she had no problem filling her time with stories and musings. Writers come with their own built-in entertainment center. And can you imagine what might happen when her writings were discovered? I'd want to read those works. Wouldn't you?

And lastly, if you saw the film, you know that Jim and Aurora did not live out their lives in idle boredom. They left something of themselves behind for their fellow shipmates to discover. Something for others to ponder and revel and dream about as they go about living their own lives.