The next space flights will push the envelope on what is possible in space. NASA wants a man to walk in space--outside the protective bounds of his spacecraft. Rookie astronaut Ed White is selected to make the first attempt at an EVA or Extra Vehicular Activity. His partner will be Jim McDivitt. The two men are friends and have known each other since attending University of Michigan and test pilot school together. They are known as the Gemini Twins.

Before the EVA can be attempted, astronauts have to learn what effects weightlessness will have on the human body. Since weightless conditions are difficult to simulate, a specially adapted aircraft, nicknamed The Vomit Comet, allows the astronauts to experience up to thirty seconds of weightlessness. During repeated flights, they test movement, carry out tasks and find ways to get from place-to-place under zero G conditions.

The next question that must be answered: How will the human body react to free-floating in space traveling at 17,500 in Earth orbit? No one knows. Can a man mentally and physically function in zero gravity? No one knows that either. The astronaut's suit will be the difference between life and death in a place where the temperature can fluctuate from +250 degrees Fahrenheit in the sun to -250 degrees in the shade. The greatest concern of all is the vacuum in outer space. If a suit fails, rips or tears, the differences in pressure will kill an astronaut in seconds when liquids within his body vaporize. The suit has to have systems that will keep the astronaut alive in these conditions. The risks are, quite literally, astronomical.

In the Discovery documentary When We Left Earth, astronaut Jim McDivitt says, "The suit was designed to keep us alive. It was risky and we accepted the risk. We didn't become astronauts to play it safe." The EVA is originally planned for the Gemini 6 mission.

But NASA is stunned to learn the Soviet space program has just achieved an EVA ahead of the Americans. This ups the stakes for NASA and a decision is made for Gemini 4 to perform the EVA. If White's EVA is successful, it will move the space program much closer to its goal of reaching the Moon and help the USA keep up with the Russians.

The astronauts train for the EVA in secrecy, often at night and in isolated conditions. Only a handful of people realize what America is about to attempt. NASA announces the space walk will be part of the mission just a few days before the launch. Many, including some of the astronauts, wonder if NASA is moving too fast and putting the astronauts lives in jeopardy. A problem during the EVA could set back the space program and end all chance at reaching the Moon before 1970.

Gemini 4 will be the longest spaceflight to date and the EVA the most dangerous fete ever attempted by the space program. A tracking station verifies all safety criteria were being met and NASA gives Ed White the go ahead to begin his spacewalk. After the astronauts get the hatch open, Ed White leaves his seat and exits the open hatch of the Gemini 4 capsule into space, attached to the capsule via a lifeline. He is now traveling free of the craft, 200 miles above the Earth at over 17,000 mph. Both astonauts know if the suit or the lifeline fails, White will be lost. There is no procedure in place to retrieve him if something goes wrong. As if to demonstrate the danger, a glove floats out of the capsule and drifts away. 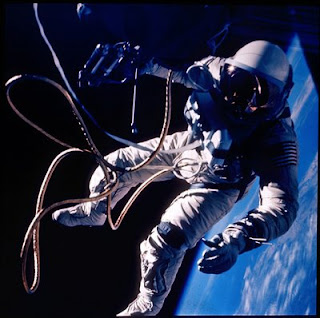 Ed White walks in space for 36 minutes. During the experience he says, "This is the greatest experience. It's just tremendous." White is so overwhelmed by his experience he is reluctant to return to the capsule and has to be ordered to return by mission control and McDivitt. As night approaches, they are concerned about the extremes in temperature change on his suit. He makes it back before nightfall.

This first space walk undertaken by Ed White of Gemini 4 becomes a major highlight of the space program and pushes the American space program even closer to its goal of reaching the Moon.
Right: Actual photo of Ed White during Gemini 4 EVA. Photo credit NASA.
[Series to be continued...]
Posted by L. A. Green at 4:00 AM