Gemini 5: When Space Gives You Lemons...

Not all Gemini missions are a resounding success. Gemini 5 launches on August 21, 1965 after an aborted countdown on August 19, and splashes down a week later on August 29. It is the first mission to last more than a week in space. The motto Cooper wants on the mission patch is "Eight Days or Bust" but his request is denied because of concerns the mission might fall short of its goal. The flight duration is 7 Days, 22 hours, 55 min, 14 seconds and with it, Gemini 5 takes the flight time record from the Soviet Union. 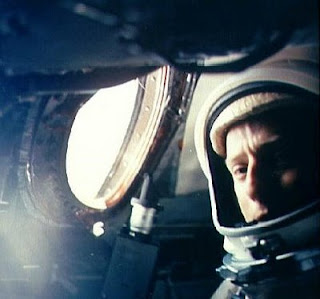 Gemini 5 fails to meet its objective to rendezvous with a rendezvous evaluation pod (REP) when problems develop with the fuel cell that preclude the attempt due to a decision to power down the cells. An experiment to photograph a nearby object can't be carried out after the REP rendezvous is canceled. The astronauts now must endure extreme boredom in order to achieve the flight time duration record.

A secondary objective to demonstrate controlled reentry guidance is not achieved when incorrect navigation coordinates transmit to the spacecraft computer from the ground. As a result, the craft overshoots its landing zone by 89 miles.

Maybe Gemini 5's motto should have been "Murphy On Board."

Right: Charles Conrad on board the Gemini 5. NASA photo credits.