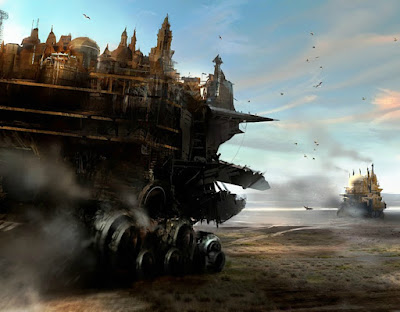 Every once in a while a science fiction movie comes along that just has to be seen in the theater. The concept, the special effects, the cinematography are such that watching on your television or your computer are not adequate to the task. You really need the big screen and the big speakers of your local multiplex. MORTAL ENGINES, the latest production of Peter Jackson’s Wingnut Films, is one of those big-screen movies.

I knew when I saw the trailer for this future-dystopia-steampunk-young-adult-action mashup about massive mobile predator cities that I would have to see it. The machine-cities are spectacular, grinding their stories-tall gears, swallowing smaller towns whole and breaking them down piece-by-piece, chewing up the landscape shattered by a long-ago “60-Minute War.” The way the apex-predator London has incorporated the landmarks of the ancient city—St. Mark’s Cathedral, Big Ben, the Tower—is evocative and macabre at the same time.

Even more visually impressive are the floating sky cities cobbled together from hydrogen-filled “balloons” and the graceful flying vehicles that serve them. These house members of the “anti-tether” movement, resisters fighting the predatory cities who terrorize the countryside. And, of course, they eventually provide the haven—and the overarching cause—for the film’s young heroine and hero, revenge-bound Hester Shaw (Hera Hilmar) and nerdy artifact hunter Tom Natsworthy (Robert Sheehan).

The pair are literally thrown together in the action-packed first third of the film when Tom foils Hester’s assassination attempt on the chief engineer of the rolling London, Thaddeus Valentine (a scene-chewing Hugo Weaving). Rather than reward Tom for his help, Valentine tosses him down the same waste tube Hester has just disappeared into, leading to the usual enemies-become-friends/lovers subplot as Tom and Hester cross a perilous wasteland toward an uncertain goal.

Hester, at first, wants only to kill Valentine for murdering her mother over a valuable piece of old tech. But it turns out that piece is central to Valentine’s plan for recreating the ancient weapon responsible for destroying the earth. (He wants to use it to take down a wall protecting the last unspoiled land paradise on the planet.) The piece was then lost, but Tom happens to know where it is back on London. So, of course, our heroes find their individual causes become intertwined with the larger goal of saving the world.

I’m not usually a fan of the young-adult model of The Kids Save the World. But, in this case, the “kids” are not that young (early twenties, rather than teenagers), they’re interesting to watch, and they have plenty of help from older adults. Best in this category would be a hydrogen flyer pilot named Anna Fang (Jihae) who almost steals the show.

A terrific subplot involves a cyborg named Shrike (Stephen Lang) who had raised the child Hester after the murder of her mother and now pursues the girl for breaking her promise to become a cyborg like him. The creature is a combination of the Terminator and the toymaker from BLADE RUNNER. He was once human, but his humanity is now twisted and obsessive, making him both terrifying and compelling as a character.

MORTAL ENGINES is based on a four-part book series by Phillip Reeve. The screenplay was written by the same award-winning trio that created the LORD OF THE RINGS and THE HOBBIT films, Peter Jackson, Fran Walsh and Philippa Boyens. It was directed by Christian Rivers, who directed the special effects unit for Jackson’s KING KONG. Other critics have slammed the story as derivative and the plot full of holes, but I hardly noticed the flaws, given the breathless pace, the likable characters and the spectacular visuals of this screen experience.

Give it a chance while it’s still on the big screen. MORTAL ENGINES is a definite go.