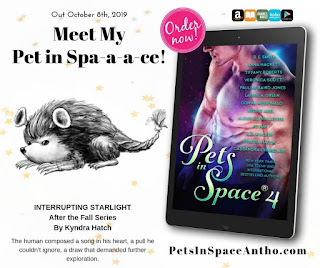 Meet Squeak, the playful pet from my Pets in Space® 4 story, “Interrupting Starlight.” He provided food and companionship to Tessa, who was stranded on the desolate desert Korthan world for two years.

Squeak is a molk, a burrowing animal that resides in Korthan space with the look and size of a large hedgehog of Earth. Trumpet ears allow him to hear very well, especially when hunting.

No one really knows where molks originated. Found on most worlds in Korthan space, they are highly adaptable. In hot environments, they have scales with a thin layer of fur underneath. In cold environments, they shed their scales, the fur becoming a thick coat that keeps them warm.
Playful and social, molks make great pets. They are scavengers, but also fierce hunters with the bonus that anything they scavenge or catch can also be eaten by humans. As humans explore Korthan worlds to inhabit, they don’t always know what is edible. A handful of humans have figured out that if a molk eats something, then they know it’s safe to eat themselves.

Korthans, on the other hand, consider molks to be vermin and would just as soon eradicate the species. Molks can burrow through metal and wiring, wreaking havoc on domiciles and starships alike. They are especially problematic on the starships, as there have been cases where molks accidentally burrowed through bulkheads, causing the contents of the ship to vent into space. They also like to collect shiny objects, which is a problem on a ship full of shiny things. Worse is that they are undetectable by sensor sweeps and scanners. Even cyborgs and living ships cannot detect their presence, so it is incumbent upon every Korthan to report a molk sighting immediately.

The following snippet features Squeak. Tessa, the heroine of the story, has him hidden away on the Korthan galaxy-ship that rescued her.

***
Tessa searched the bed covering for her squeaky companion. Blinking up at her sleepily, his bulbous trumpet ears perked up at the sight of the container in her hand. That was a good sign.

Opening the container, she barely had time to show the creature the contents before Squeak was upon the cube, devouring it ravenously. Okay, so it wasn’t poisonous. One problem, there wasn’t anything left for her to eat.

“You couldn’t save some for me?” she said.

The little animal looked up at her, emitting several low-pitched squeaks, head turning sideways, tail sticking up in the air.

Tessa grabbed her bag. At least there was some spider jerky—

“You ate all the spider jerky too?”

Squeak disappeared under the covers, tuft of feathers at the end of his tail sticking out, giving away his position, unbeknownst to him.

Gently grabbing the tuft of feathers as she walked past the bed, Squeak let out a playful squeal as he turned, the feathers disappearing under the covers, a fat paw with long claws swiping out, trying to grab but missing her fingers.

Grab your copy of Pets in Space® 4 today! For a limited time, Pets in Space® 4 brings together today’s leading Science Fiction Romance authors to help Hero-Dogs.org, a non-profit charity that helps our service veterans and first responders.  https://petsinspaceantho.com 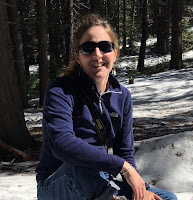