Two Years in the Making: StarDog is a New Release!

StarDog, my latest release, was the first story in my Inherited Stars series that introduced the wascawy little dog/cat/weasel/mongoose bio-constructs who were created to be companion animals, ship's mascots...and sometimes...spies. (Like in the current companion story in USA TODAY bestseller Pets in Space® 4, SpyDog.)

Let me kick this off with a snippet from the start of the story and the incident that sparked an adventure for this star navigator:

When Captain Dava Jordon used that bone-chilling tone, no one asked questions.

Taro Shall, ship’s navigator, didn’t even blink as she stalked toward his navcon, weapon drawn and eyes locked on her target. Thankfully, whatever that target was, it wasn’t him. She was aiming toward the deck in the general vicinity of his feet.

She squeezed off two blasts of her laze-pistol.

Taro jumped back as the searing heat penetrated through his deck boots.

Just below his station, something long, tan, and patterned in singe marks writhed on the floor. “What the Hades, Skipper?”

Captain Jordon took two cautious steps forward and leaned down to examine the victim, sweeping back her long black hair with one hand. “Take a look.”

Taro gripped the armrest of his flight couch and went to one knee, craning his neck to get a better look at the thing on the floor. When he finally registered the shape and scales, he sucked in his breath. “Snake?”

The captain screwed up her face in disgust. “Must’ve picked it up back on Dartis. It’s a sand viper.”

“Viper?” Taro pushed to his feet and backed off a step.

“Yeah. A very deadly one. If one of these little terrors sinks his fangs into you, you’ll drop before you can spit out a curse.”

Taro swallowed the ball of ice rising in his throat. “Guess I’m damn lucky you saw it.”

“Sensed it,” she clarified. “I was plugged into Calypso. The flight deck motion sensors picked it up.” She nodded to the black drive helmet now perched on a cradle at her command console.

Taro exhaled, his pulse still in the process of deceleration. “Glad you never miss.”

“Well, it’s not the end of our problems.” She straightened, holstering her weapon.

“That’s a hatchling. Maybe a couple days old. It’s been five days since we left Dartis.

That means there’s a mother and several dozen siblings slithering around Calypso.”

“Exactly.” Captain Jordon scrubbed a hand over her face. “Looks like we’re grounded until we find a fix. Before Doc Emboratyr gets word of our little issue, we need to hire an exterminator. A good one.” She pinned him with a look. “We, of course, means you. Best get to it. We’re losing daylight.”

Taro snagged his jacket from the back of his flight couch. “Aye, Boss, I’m on it.”

With one last glance at the charbroiled little carcass, he strode to the lift.

“Better watch where you step on your way out. Could be more of them anywhere,” the captain called after him.

Taro gave her a casual salute and did a quick check of the floor as the lift rotated to descend from Calypso’s upper flight deck to the main level below. He warily scanned the corridor before venturing off.

Outside the ship, Carduwa’s warm, herbal-scented air ruffled Taro’s hair and danced along the pavement in gentle eddies. A friendly sun lit the heavy greenery of tall trees and dense shrubbery just beyond the spaceport grounds. This planet was nothing like the bone-dry dustbowl of Dartis where they’d last made port. Thank the Island Spirits for that much.

Taro made his way to the nearest street just off the spaceport exit and glanced down an endless row of brightly colored vendor tents. Where to start?

He ducked his head into the entrance of the first two pavilions with a questioning, “Exterminator?” The answer on both counts was a brisk shake of a keeper’s head. Somewhere around vendor twelve, he got a lead.

The book trailer also provides the exciting tone of this adventure:


It's taken me a couple of years to get this one where I wanted it to be, expanding scenes, adding chapters, and writing a whole new epilogue.

This standalone book is nearly twice the length of the original, which gave me the opportunity to delve a little deeper into the mystery surrounding the Calypso and her captain, to better establish a new character who also has a role in SpyDog, and to give more insights into the relationship of the leading couple.

Readers loved the original story and the HEA, but a few were a little distraught that Taro had been left in such a quandary. The new epilogue addresses this and takes the relationship between Taro and Adini just a little further into the future.

I think you're gonna love it! 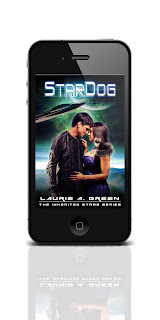 Navigator Taro Shall's captain assigns him an unexpected mission–find a way to eradicate deadly vipers that have infested starship Calypso. He never expects to find the solution to his problem in the hands of Adini, a charming street vendor. But the bio-engineered StarDog he acquires turns out to be a galactic hot potato, and both Taro and Adini are soon fugitives on the run.

Adini Kemm can't deny her fascination for the honor-bound navigator, though his past and her present seem to null any chance at a shared future. Until her father's capture as a spy catapults both her and Taro into a desperate bid to save him...and straight into the clutches of a brewing insurrection.

StarDog will be on sale for only .99 cents until November 11th, Veteran's Day.

Follow me on BookBub to get news of future releases.

You all have a Happy Halloween and a wonderful week!