First of the Morgan's Misfits series 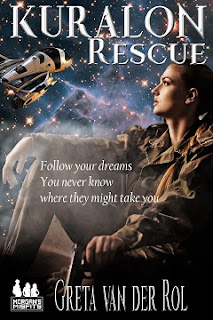 In Kuralon Rescue we meet the Misfits, one by one.


Siena and Jirra have managed to evade the bounty hunter chasing Jirra and made it into space in a battered little freighter called Kali's Gift. Siena has finally admitted her grand plan is to rescue her fiance, Anton, from a prison planet and she wants Jirra's help.

But Jirra systematically picks holes in the girl's bare-bones plan. It isn't going to work.

She was begging, her eyes pleading. "I'm no soldier. You've just shown me I don't know it all. I'll admit I was hoping you'd come. You'd understand, surely. I love Anton. I want to marry him and have children. He's going to die in that awful place. Please?"

Tears glistened in Siena's eyes. Jirra felt her pain, so much the same as her own, a black hole of hopelessness. What would she, Jirra, do in the same situation, if it was Prasad in some hell hole? "Doesn't he have family?" she asked at last.

"There's nothing they can do. They'd be under surveillance. That's if they're still alive." Bitterness colored Siena's words.

"Will follow you wherever you go. But now the trail's muddied, yes? He won't even know you're going to Crossmar, let alone Kuralon. And if I have to find another ship or another pilot, they wouldn't know me, they probably wouldn't help me."

With her elbow on the table, Jirra rested her chin on her fist. Her heart said do it, but her brain pleaded for sanity. She'd be walking into an unknown situation without a real plan. Suicidal came to mind. Then again, what did she really have to live for? She couldn't have Prasad and she didn't want anybody else. She didn't believe in gods and religion, but she did believe that sometimes serendipity shows up and shoves you in an unexpected direction. It had happened to her when she'd accepted the chance to learn from an alien. Her few friends had distanced themselves, but she'd ended up on the trip of a lifetime, a historic trip across the galaxy to search for the Manesai's ancestral home. The little voice in her mind sang its siren song. Follow your heart. You never know where that might lead you. Her decision must have been transmitted in her facial expression because Siena smiled before Jirra said a word.