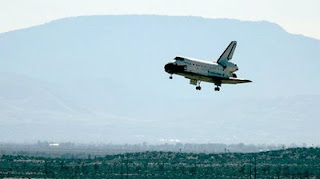 The space shuttle Endeavor performed a perfect, text book landing today after being rerouted from Florida to Edwards Air Force Base in California, due to inclement weather. Commander Christopher Ferguson landed the craft with her crew of seven astronaust at approximately 4:25 pm EST. Endeavor will be piggy-backed atop a special 747 jumbo jet for the return trip to Kennedy Space Center.

The STS-126 mission launched on November 14 with eight astronauts on board and objectives to improve the International Space Station with a new bathroom, sleeping quarters, and urine recycling system. The crew also was able to clear metal shavings from a jammed solar wing joint.

Some facts about Endeavor you may not know:

Endeavor (OV-105) was the fifth shuttle authorized for construction by Congress on August 1, 1987, as a replacement for Challenger. Endeavor is named for the first ship captained by 18th century British explorer James Cook. Cook was an amateur astronomer who also championed the idea of including scientists on exploratory expeditions.

Endeavor arrived at Kennedy Space Center on the back of a NASA Space Shuttle Carrier Aircraft (747) on May 7, 1991 and flew her maiden flight (STS-49) a year later on May 7, 1992 after a flawless lift off. Endeavor was the first shuttle to use a drag chute during landing, and other upgrades included the avionics system, nose wheel steering, and an external airlock giving the craft the ability to dock with the International Space Station.

The two other surviving orbiter shuttles are Atlantis and Discovery.
Posted by L. A. Green at 5:16 PM