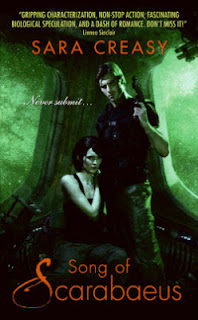 After many years of passing by my copy of Song of Scarabaeus for other books, I finally settled down to give it a read.

It's not that I wasn't curious. First of all, author Sara Creasy landed Kristen Nelson as an agent, and that isn't an easy feat. So I figured the story had to have a lot going for it.

I can't blame the cover for my procrastination either. The art wasn't a turn off, though it was a bit dark and doomsy for my taste.

I think what failed to shout YOU HAVE TO READ ME NOW was the title. After reading the book, I now understand why the title was fitting, but it didn't carry any meaning until I got into the story instead of pulling me in to flip the first few pages like a great title can. The author's use of "song" in the story is creative and almost poetic. I'd never thought of technology in those terms.

And once I finally did start turning pages, I didn't stop.

I found Song of Scarabaeus well-crafted, imaginative and techie enough to satisfy many purist (and male) SF buffs.  The world building was rich, layered and appropriately dark, with the biology, politics and counter-culture elements realistic, with a well-rounded cast of characters. The vocabulary was particularly cutting-edge, and some of the descriptions were pure genius. For me, the Science Fiction really ticked all the boxes.

But I'm not sure this novel could be labeled SFR. Perhaps SF with romantic elements. Or romantic hints. Or something. Because the romance was practically non-existant. The characters did share a strong bond, they cared for each other, and they occasionally had some real moments of heat between them, but the closest thing to a romantic interlude in the first 150 pages quickly got shut down by the heroine. For me, that seemed to leave the story a bit lacking, because I did want the H/H to get together and it seemed they could have shared a pretty spectacular love affair. All the elements were in place, but it short-circuited somewhere along the way.

That said, if you're not a diehard Must Have Romance sort, Song of Scarabaeus is a great story that will tantalize your imagination to an innovative and sometimes cruel future. Firefly meets Blade Runner comes to mind. There are equal parts intrigue and heart-pounding adventure and characters you love to root for as well as characters you love to hate.

Well worth the read and one of the better SFs (without much R) I've read this year. I'll definitely pick up a copy of the sequel, Children of Scarabaeus. 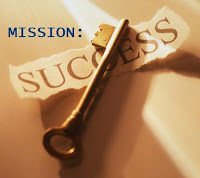 I'm so happy to announce I'm on the verge of launching my new web site. This has been in the works since August, and with much tweaking and brainstorming, I think site developer Bemis Promotions and I have collaborated on a striking design. I hope to soon announce it's gone live here on Spacefreighters...and, well, everywhere!

Many, many, many, MANY congrats to peer Laurel Wanrow on landing an agent. This marks the third SFR Brigader in six months to find representation. Exciting times for Science Fiction Romance indeed! It's not an easy feat to find an agent, and I hope Laurel might pop in to Spacefreighters and tell us a little more about her 'agent hunt' story in comments. Laurel, the Billins is on us!

I, of course, am so excited about our own co-blogger Donna recently finding representation. We co-bloggers are now two published authors and two agented pre-published authors--this Mission Success thing has really worked well for us! Behold the power of positive thought. :D

Here's wishing everyone a fabulous week of holiday parties and preparations, and that the world doesn't end on Friday (as prophecized for thousands of years, by many cultures and prophets, all over the globe). When the day comes maybe we'll all hear a tiny little Roseanne Rosannadanna voice in our head saying, "Never mind." Bet the bars will be jumping for Happy Hour on Friday night!