TOMORROWLAND: BACK WHEN THE FUTURE WAS BRIGHT


“When I was a kid,” says George Clooney’s character Frank in TOMORROWLAND, “the future was different.” 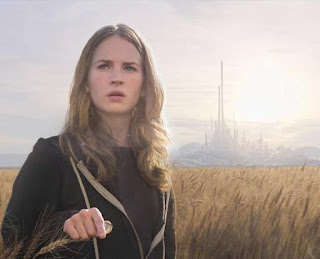 Think about that statement for a minute and see if you don’t agree. Frank was eleven years old in 1964, (just my age, as it happens) a hopeful child genius crashing a contest for amateur inventors at the World’s Fair in New York. In those days we believed science and good old American ingenuity could solve any problem. The future was bright. There was nowhere to go but up—and out, into space, into the oceans and every hiding place of scientific mystery, chasing a vision of a better world.

We accomplished some of the goals of that hopeful time. We landed on the moon. We signed the Civil Rights Act and the Environmental Protection Act. We invented personal computers and cellphones and medical imaging and all manner of toys.

But even as we did this, our hearts were cut out. We lost our leaders to assassination, our sons and brothers and fathers to war, our prosperity to economic instability. And somewhere along the way we lost our hope. The future changed.

TOMORROWLAND’s villain, Mayor Nix of the much-reduced city of the future, played to the outrageous hilt by Hugh Laurie, says eloquently that our culture has embraced dystopia. We wallow in our misery, rather than seeking a way out of it, because it’s easier, he says. Wallowing requires nothing of us.

On one level, TOMORROWLAND, directed by Brad Bird (THE INCREDIBLES) with a screenplay by Bird and Damon Lindelof of LOST fame, is a fast-paced SF adventure film with a teen protagonist and a pretty high fun quotient. Britt Robertson plays Casey, the teenager with a social conscience and enough scientific curiosity to kill ten cats who is “recruited” to join the wonder-filled futuristic community of Tomorrowland in another dimension.

Too bad the community that once existed is now only a distant memory, allowed to run down under the glowering leadership of Mayor Nix. Problem is, Nix was overwhelmed by the prophecy of Earth’s doom, a prophecy revealed in a calculation made by the grown-up boy genius, Frank.

Frank was exiled for his trouble and now monitors things from his farm/fortress in upstate New York. A grizzled curmudgeon, he doesn’t work well with others, especially perky teens seeking entrance to the hallowed Tomorrowland. The chemistry is great between the man who has lost hope and the girl who can’t help but spread sunshine, and even Frank must take notice when Casey causes a minute change toward the positive in his doomsday calculation.

The second half of the film has Frank, Casey and the android who recruited Casey with her last Tomorrowland “pin” finding a way into the next dimension to save Tomorrowland from Nix and the world from doomsday. Action ensues, all of which is entertaining, if not entirely credible. I have to say my favorite scene was one in a “collectible” shop with two bad guy owners who try to kill Casey, but not before we learn one thug’s name is Hugo Gernsback, and we get glimpses of a model of the LOST IN SPACE robot, Robby the Robot from FORBIDDEN PLANET and various spaceships and aliens.

But the central point of this film is deeper than one would guess from either the previews or the mediocre reviews that seem to miss it entirely.  And that is the one I started with. The film references an old Native American proverb which was adapted for this story. Every person has two wolves inside that are constantly fighting. One is hope, the other despair. Which one wins?

The one you feed.

The future holds any number of challenges—global warming, economic disparity, the possibility of world pandemic, environmental destruction, geologic instability—and we can choose to face them with fear, doing nothing. Or we can choose to take them on in a spirit of unity and strength, of positivity and hope. And do something.

Some part of that eleven-year-old still lives in me. I choose hope. How about you?