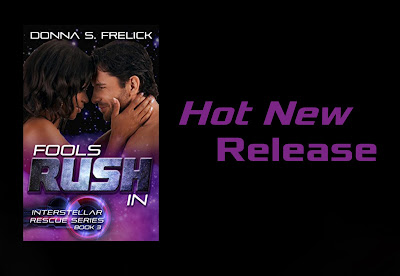 “What the hell do you think you’re doing?  This is a restricted area.”

Still clinging to the grab bar, Rayna glanced up at the captain’s face.  His expression didn’t match the censure in his words.  The furrows between his brows didn’t look like anger, but she couldn’t quite interpret their true meaning.

“For a pirate ship, you sure have a lot of rules.”

“Discipline is necessary no matter what kind of ship it is.”  His lips curved upwards.  “Now answer my question.”

Sam Murphy really was a fine-looking man, a dangerously fine-looking man, with those green eyes and a face that belonged in holovids rather than on the deck of a real ship.  But damned if he was going to back her up, even in zero G.

“You saw what I was doing; I was working out.  The ribs have healed—almost.  I didn’t think I’d have to ask permission, especially since I was back here with the waste processors.”

Murphy leaned in closer.  In spite of herself, Rayna inhaled and took him in.  God, he smelled good—like . . . the first breath of fresh air dirtside after months on a ship.  For a second she was lost, drifting as surely as if she had let go of her mooring on the hull.

“This is my ship, Little Bit.”  His voice was a seductive purr.  “You need permission for everything.”

Heat flashed from the top of her head to the bottoms of her feet.  Rayna meant to shout, but her voice came out in a matching sultry whisper.  “Why you puffed up, self-righteous, arrogant—” She got her hormones in check and started over.  “Control seems to be your middle name, Murphy.  Well, let me tell you something:  I joined Rescue because Independence is mine.”

“Do I have to remind you you’re a guest on my ship?”  His expression had tightened into a smoky scowl.  “The one place I have plenty of room onboard is the brig—maybe you’d like accommodations there.”  His eyes held hers like he meant it, but a muscle jumped in his jaw.  His tell, she realized.  He wanted something quite different for her.  That heat flashed through her once again, and this time she was certain it had nothing to do with anger.

“All right, yeah, I saw the big ‘Keep Out’ signs.  But every other square centimeter of space on this tug is occupied.  I needed a workout, and zero G is a good place to get started.  I didn’t think anyone would be back here.”

His expressive face changed yet again, the hard lines around his mouth and eyes going soft as the tension drained from him.  “Any day but today you’d have been right.”

He scanned the empty hull space before he answered.  “The ship’s on lockdown; I’ve ordered a full security sweep in hull space.”

Understanding dawned.  All that bluster was because Murphy was feeling protective.  She looked up at him and, yep, there it was, shining from those eyes, despite his stern refusal to smile.

But just because her body responded instantly with eager anticipation didn’t mean her mind should be onboard with this program.  Seriously, how would it ever work between them?  He was a pirate, for chrissake.  According to him, she was an interfering bleeding heart.  The only thing they had in common was a disregard for authority, and they would never even agree on the reasons for that.

Oh, but, damn, he smelled so good.  He kept floating closer, and she was so tired.  She wanted to let go and settle into those arms.

“You miscalculated.”  His arm was around her shoulders again, his lips against her ear.

“What do you mean?”  Her protest came out in a breathy murmur.

“You’re exhausted.  You weren’t ready for this much exertion.”  He was so close, so warm, encouraging her to let go.  “I bet you didn’t ask Doc Berta for permission either.”

She finally gave up and transferred her hold to him, arms and legs wrapping around his hard body.  He hooked both feet around the handholds below them, anchored one hand and used the other to clasp her to him; she was so small in comparison, his arm stretched all the way across her lower back.

She looked up at him, lips inches from his.  “I don’t ask permission for anything.”

He made a low sound of amusement, then he gave her what she wanted, just a brief touch at first, a brush of his firm lips across hers, but it was enough to send a thrill of electric sensation through her chest.  She gasped, even as he pulled her closer and stroked into her mouth, his tongue tangling with hers.  The way he felt, so smooth and hot, the way he tasted, like dark cherries, the way his arm curled around her back like he would never let her go, every detail was clear in her mind.  Still she was gone, as if he had somehow turned off her rational mind and allowed her access only to the more primitive part of her brain, the part that wanted to take this kiss to a place where they were both naked and straining toward climax.

She knew it couldn’t happen—could it?  A moment ago they’d been arguing.  But, God, the way he held her, the way he was kissing her, set every nerve-ending on fire.

In desperation she broke off the kiss.  “What is it about you?”  As she spoke his lips were at her throat, nuzzling his way down to her shoulder.  “You drive me crazy.”

Yeah, these two are on fire for each other--and there's no dousing the flames, despite all the cold water the universe keeps throwing on them! Check out the blurb when you pre-order NOW on Amazon.

AND DON'T FORGET THE GIVEAWAY!

Did you know that audiobooks are the fastest growing segment of the publishing industry today? That's because they can be enjoyed on the go (while you're driving or working out or walking). But it's also because the experience of listening to an audiobook adds so much to your enjoyment of the story. A good reader--like Lisa Beacom, who does the Interstellar Rescue series audiobooks--gives every character his or her own voice and personality, making the words come to life.

All you have to do to experience this for yourself is COMMENT BELOW for a chance to win a FREE audiobook of Trouble in Mind, Book 2 of the series, AND a $10 Amazon Gift Card. Or go to my Facebook Author page and COMMENT, LIKE and SHARE to enter. The winner will be announced here next Friday, August 19.