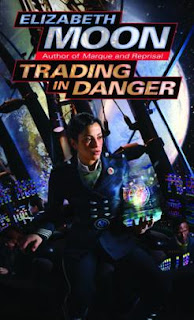 I've been re-reading SF books I've enjoyed in the past. It's a comfort zone thing. I know I'll enjoy the journey but it won't be quite the same and I also know I'll pick up things I never noticed before. It's like driving the same road through scenic country. You know where you're going but the time of year, the weather, and just time itself will change the subtleties of what you see.

I've always enjoyed Elizabeth Moon's science fiction. She includes detail which I'm sure some people find tiresome, but I like the sense of immersion in her worlds. And although there's no way you could classify her books as science fiction romance, romance is still an important component.

My latest re-read was her Vatta's War series. That link provides a summary of each of the books, in order. The five books start with a very young officer cadet, kicked out of the space force academy with only three months to go on her four-year course. Kylara Vatta is the daughter of a space-trading dynasty and her parents send her off as captain of an old freighter destined for scrap at a distant system. On Glennys Jones's last voyage Ky decides there's no need to scrap the ship. She should be able to find a cargo and turn a profit. But while she's doing that, the Vatta family is decimated, her father and her uncle who were the CFO and CEO of the company, and their families are killed in targeted attacks. What's more, somebody is attacking the ansible service which allows communication between planets in real-time. That technology is owned by the giant InterStellar Communications (ISC) company which controls its monopoly with ruthless efficiency.

Over the five books the odds escalate as Ky uses her military training and an innate strategic and tactical ability to build a force capable of fighting back against pirate forces intent on controlling the known galaxy. As part of that journey Ky meets Rafael Dunbarger, a conman and crook who she distrusts, but finds useful because of his knowledge of ISC technology. Turns out he's the ne'er do well son of the chairman of ISC. In the chaos created by the pirate raids on space stations and shipping, exacerbated by the destruction of the ansibles, Ky builds a fleet and defeats larger and larger enemies, becoming, by default, admiral.

I imagine I'm not the only one who found this a bit unlikely – but then again, Napoleon Bonaparte was a general at age twenty-four. During the French Revolution thousands of people died at the guillotine, many of them aristocrats who would have been the officers in the army and navy. Seeing the disarray, European armies lost no time in attacking France. When a young leader stood up and took charge, people were prepared to follow. And pretty soon, Napoleon had conquered most of Europe.

Centuries later, it's much the same for Ky Vatta. Except she doesn't crown herself emperor.

The Vatta series is a sprawling, complex story spanning star systems but it also encompasses a number of much more intimate stories, several springing from the Vatta trading empire. There's Toby, a teenage relative who was the sole survivor of a Vatta ship blown up at dock. There's Stella, Ky's beautiful cousin who was long scorned as 'that idiot Stella', and there's Osman, the black sheep Vatta who turned pirate. And there's Rafe, heir to a galactic monolith of a company, who has his own important arc. It might be valid to compare the storyline to War and Peace with technology.

From early in the story, Ky and Rafe's tentative relationship changes, never overt but always there, a complicating thread that's woven into the fabric of larger events. There's even a Happy Ever After. For those who like lots of sex in their reading, don't bother. It's one of those stories where any physical encounters are left to the reader's imagination.

Not only was the book a welcome reprise – I discovered that Moon wrote a sequel.

Vatta's Peace book one Cold Welcome and book two Into the Fire follow on from the end of the Vatta's War series. Admiral Kylara Vatta returns home to what should have been a hero's welcome – and finds herself thrust into the planetary politics that resulted in the attack on her family all those years ago. These two stories are different in that the events take place on Ky's home planet, Slotter Key, so it's a very different framework to the space battles of Vatta's War, but it's still meaty, convincing stuff. It was a very satisfying way to spend a couple of days immersed in Moon's words.

However. (There has to be one) The ebooks are not cheap. You could probably pick up the paperbacks for a lot less at a second-hand book store – or even from Amazon. Although I actually had the paperbacks, these days I find it much easier to read on a screen because I can adjust the size of the print, so I ponied up for a new set. I'm surprised (or maybe I'm not) at how much the big publishers can charge for an ebook. They're more expensive that the paperbacks. Here's the Amazon link. Makes US$4.99 for my longer books sound cheap. Oh well. That's big business I guess.

Attribution for the cover art:  https://en.wikipedia.org/wiki/File:Trading_In_Danger_(front_cover).jpg