In this grim time a little escape and new heroes to admire are certainly welcome, and this week’s recommendation for where to get them cites a familiar source. Neil deGrasse Tyson, everyone’s favorite astrophysicist, is back on the Fox Network with his second re-imagining of the popular Cosmos television show first created by Carl Sagan and wife Ann Druyan in 1980. 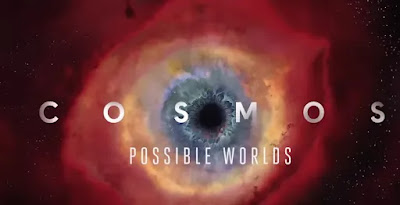 This time the show is titled Cosmos: Possible Worlds, and uses the fictional trick of the “ship of imagination” to take us both back in time to view our Earth’s creation and our human species’ rise, and out into space to explore other possible life-nurturing planets in the galaxy. The ever-optimistic Tyson is our host for these journeys, explaining everything in a way that’s scientifically based, graphically displayed and easy to understand. Ann Druyan serves as lead writer on the series. She’s also an executive producer, along with comic Seth McFarlane, well known as a space geek.

I hope you have a decent television set at home to watch this show, because the visuals are stunning. Whether you are in a location here on Earth, or looking at the stars, everything is awe-inspiring, which I imagine is the point.

I do have one criticism of this latest iteration of the Cosmos franchise. The various historical segments are done in a kind of weird stop-action-looking CGI animation rather than using real actors. This, combined with Tyson’s tendency to lecture in maddeningly simple terms, made me think I was watching a science special aimed at fourth-graders at times, rather than the Carl Sagan show of old, which always pitched the material way over my head.

Unfortunately, I think there’s a reason for that. We no longer respect, value or bother to learn science (or history) in this country. A show like Cosmos: Possible Worlds has to dole out its information in small, easily digestible bits or risk losing the audience. That doesn’t exactly explain why real actors couldn’t have been used instead of CGI for the historical parts, but I can understand that the producers might have wanted to reserve a limited budget for more WOW-factor location shots and onscreen recreations of exploding stars.

A recent episode provided an example of the show’s underlying philosophy, and its ultimately uplifting inspiration, even though the production aspects were frustrating. Episode Four, titled “Vavilov,” told the story of an unsung hero of science, Russian agronomist, botanist and geneticist Nikolai Vavilov. In the years before World War II, Vavilov traveled the world collecting seeds and roots in a search for the earliest, purest genetic forms of common food crops. He believed knowledge of these base forms would provide a starting point for improving the seeds used for agriculture.

Vavilov wanted to build on the theories of Gregor Mandel and Charles Darwin to solve the age-old problem of crop failure and famine in Russia. To that end he established the world’s first global seed bank in Leningrad and began work in genetics that became recognized throughout the world. But in the poisonous political atmosphere following the death of the revolutionary Lenin and the rise of the authoritarian Stalin in the USSR, a young man Vavilov had taken under his wing turned on him.

Trofim Lysenko began to denounce Vavilov’s theories and put forward his own, nonscientific ideas. The politically astute Lysenko found easy favor with Stalin, a man with no patience for learning or science. But Lysenko’s simplistic theories only encouraged Stalin’s foolish political ideas with regards to state agriculture. The result was mass famine on a scale seldom seen even in Russia. Millions died in 1932-33 in an event the Ukrainians named the Holodomor (death inflicted by starvation).


Vavilov, by contrast, lost favor with Stalin. By 1939, the famous scientist had lost the right to travel abroad, and in August of 1940 he was arrested. A year later he was condemned to death. The sentence was later commuted to life in prison, but in reality, Vavilov was forced to slowly starve to death. He died in prison in January, 1943 at the age of 56.

During the two-and-a-half year siege of Leningrad by Nazi forces, during which approximately 1.5 million citizens of the city starved to death, a handful of Vavilov’s colleagues lived in the basement at the Leningrad seed bank and guarded the a cross-section of the precious genetic material Vavilov had collected with their lives. Nine of the scientists themselves starved to death, but none of the staff touched the seed compilation, though it contained rice, wheat and other edible food grains. (Today’s Global Seed Vault, the modern embodiment of Vavilov’s idea, exists in Svalbard, Norway within the Arctic Circle.)


I knew about the siege of Leningrad, Stalin’s famines and the Global Seed Vault, but I had never heard the name of Nikolai Vavilov before this episode of Cosmos: Possible Worlds. And I had certainly never known of the heroism of Vavilov’s fellow scientists in Leningrad. It was worth putting up with the irritating CGI production on the episode to gain this useful knowledge and a historical reminder that a refusal to accept the facts of science in the pursuit of a political agenda can lead to death and destruction.

There was another upside to this episode. Viggo Mortensen provided the voice acting for Vavilov’s character. If you’ve seen the excellent movie EASTERN PROMISES, you know he can do a terrific Russian accent. (The man speaks five languages, after all!) That makes it even more disappointing, though, that we didn’t get to see Viggo act the character.