Social distancing – taken to the max!

As with so many other present-day scenarios, it's not hard to find parallels in science fiction of the world we live in now. Other people have mentioned Stephen King's The Stand, and the movie Outbreak as early rumblings of the damage caused by a pandemic. But 'social isolation' goes back a lot further. 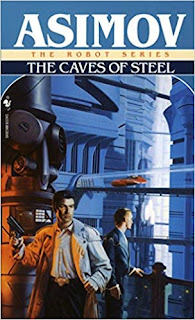 I wasn't introduced to Asimov's robot series until a while later (being a wee child in the 'fifties) but I remember the books well. Earth's surface is completely wrapped in a steel mantle. Everyone lives inside, in apartments with communal bathrooms. Only the most senior officials have the privilege of their own wash basin in their own apartment. Everyone eats reconstituted yeast grown in factories. The planet is crowded and privacy is a long-gone concept. 'Weather' is unknown.

However, some settlers from Earth had escaped to the stars many centuries before and created their own societies, assisted by robot servants. The Spacers, as they are called, live on spacious estates managed by their robots. Mindful of the overcrowded Earth, they strictly limit the population – especially because, in this environment, they are now able to live for three hundred years and more.

In the novel The Caves of Steel, detective Elijah Bailey must investigate the death of a Spacer who has come to Earth for official business. When they visit Earth, Spacers always live in a sanitised, cordoned-off area of the planet to prevent their contact with Earthlings, not because they feel themselves to be superior (although they probably do) but to prevent the danger of contracting diseases which their bodies could no longer fight. Maybe something like Covid-19.

Many times in history the mingling of humans from different environments has led to the inadvertent deaths of many. Europeans brought smallpox to Australia, a disease to which the aboriginal people had no resistance. There's a similar story attributing European syphilis to Columbus's crew returning from the New World. 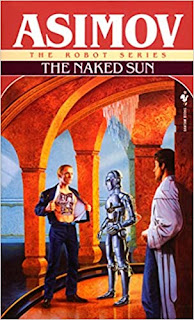 But there's social distancing and social distancing. The second Elijah Bailey mystery, The Naked Sun, takes place on Solaris, one of several Spacer planets. Here, the concept of lots of space and privacy has been taken to extremes. This is an extract from the synopsis of The Naked Sun on Wikipedia.

"The book focuses on the unusual traditions, customs, and culture of Solarian society. The planet has a rigidly controlled population of 20,000, and robots outnumber humans ten thousand to one. People are taught from birth to avoid personal contact, and live on huge estates, either alone or with their spouse only. Face-to-face interaction (referred to in the book as "seeing"), and especially impregnating a woman, when replacement of a descendant is necessary, was seen as unavoidable but dirty. Communication is completed instead through holography (referred to in the book as "viewing") where in contrast to "seeing", they are free of modesty, and have no problem if an interlocutor sees the other's naked body. A two-way teleconference allows the participants to hear and see each other, but in 3D – an idea almost unheard-of at the time of publication, when color television was a novelty."

It's easy enough to see the present-day equivalents, where conversations take place via skype or some form of social media. Is this the direction we're headed?

I have to say, I hope not. But social distancing is eminently sensible at this time. We don't know who is infected and who is not - and like the Spacers, we have not (as yet) developed any immunity to this disease.

(By the way, both books are great detective stories as well as great SF. If you haven't read them, give them a try)