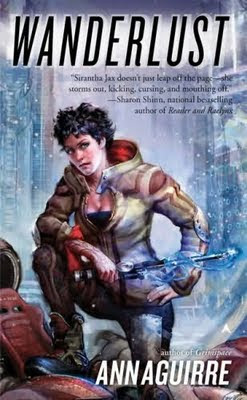 Today, Donna and I are doing a one-two punch of the second and third novels in Ann Aguirre's Sirantha Jax series, WANDERLUST and DOUBLEBLIND. You can also click this link to read a much earlier "First Look" post on the first in the series, GRIMSPACE.

Just an aside. Prior to last year, I didn't read many books due to time constraints. The more I heard that "reading is a must!" for writers, the more I tried to find ways to cram books into my schedule wherever and whenever I could. As a result, I was able to read 25 books since October 15, 2008--all in my spare moments. I began and ended my year long reading spree with GRIMSPACE and WANDERLUST.

In the first few pages of WANDERLUST, I realized why I enjoyed GRIMSPACE so much. Aguirre's dialogue, both spoken and internal, is some of the best I've read, bar none. It's intelligent and twisty in the best possible way. There's nothing predictable in anything her main character says, thinks or does--and some of March's retorts show him to be her equal in all things. (Have I mentioned how much I adore March?)

In GRIMSPACE I got downright upset with Jax for her treatment of March, but in WANDERLUST she's finally recognized March for the diamond in the rough he is, and her affection for him is much more evident and powerfully drawn, especially later in the story.

Since being declared prematurely dead in GRIMSPACE, Sirantha Jax has a whole new set of problems. She's been offered a new job with a lot of prestige--as the new ambassador to Ithian-Tor--but first she has to actually get to the planet, which proves to be almost an impossibility. It seems ambassadors-to-be get no respect and draw a lot of the wrong kind of attention.

March kept me fascinated and chuckling in the opening chapters until I hit that "Oh no!" wall that I had a feeling was coming. Well into the story March struggles with a debt owed from his previous pre-Jax life and it will take the characters in new directions for the last part of the book, and leave the reader with a paradox for the two lovers in the next book(s) in the series.

The bounty-hunter Vel is back, the soft shell of a man surrounding a crunchy Ithtorian center, and he's every bit as amazing a character as he was in GRIMSPACE. There are also a couple of new additions that are picked up along the way--Jael and Hit--and another who's more or less "assembled." I have to admit to a certain partiality to Jael and his talents, but I'm afraid to get too cozy with him, because I'm not sure he's completely trustworthy. Jael displays an irrestistible blend of strength and vuluerability. (And so I suppose, like Goose in Top Gun, that means he's toast.)

The big twist in this book came when Sirantha Jax realized something about herself and a newly acquired physical handicap that provides insights into her origins and makeup as a grimspace navigator. This amazing twist promises to lead her character to new discoveries about herself in later books.

The ending of WANDERLUST did leave me a bit unsettled and the characters' stories unresolved, but that seems to be the case in most bridge books. It definitely did it's job (as did Donna's upcoming review) in piquing my interest to get to the next in the series asap.

Go to the next post for Donna's take on DOUBLEBLIND.
Posted by L. A. Green at 5:01 AM