Houston, We Have a Problem

I generally avoid political subjects like the plague (excuse the cliche'--maybe I should have said Romulan flu?), unless they hit very close to home.  The recent announcement of proposed cuts to our space program have left me wondering if the only way we humans will ever reach the stars is through our imaginations. This sinking feeling I have of an era lost and all our advances forgotten was summed up quite well here.

Where is our space program headed?  Did my current work in progress, Outer Planets, just move from the category of Near Future Romance to Science Fantasy? Can we even hope for manned exploration of our own solar neighborhood in the next century?

The decisions happening today regarding space exploration (and the funding cuts that are impacting it) do--or should--matter to us as writers. We view the 2001 and 2010 movies now with a wistful smirk. We are nowhere near as advanced as we thought we'd be when these forward-thinking motion pictures were first released.  A low budget little TV show called Star Trek inspired an entire generation to pursue careers in science and astrophysicists in the 60's so they could reach for the stars and make that fictional futuristic dream more of a reality.  Now, funding obstacles have pushed our goals back further and further, until we've reached the point those goals now seem beyond any possible reality we might actually achieve in the foreseeable future.

Can private industry pick up the gauntlet and take us forward, as has been suggested as the "solution?" It's a huge gamble, when projects such as Spaceport America are threatened by funding crises in the states where they are being developed. Although private industry may be able to afford to build the crafts, can they also afford to construct and maintain the actual spaceports themselves? Will major corporations--those with the massive funding necessary--see this as a solid investment or quick enough return on their capital outlay?  And will their focus not be on advancing our exploration of space and scientific discovery to improve health, medicine, food production (to name only a few benefits that have arisen from our space program), or will it be on commercial gain via high tech, high ticket amusement rides of near Earth orbit or the space station?

It seems the "fiction" in science fiction romance is becoming the key operative word, as we face a very uncertain future for space exploration...or perhaps, for our future, period. 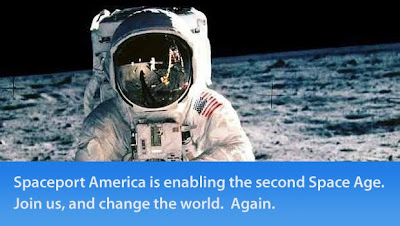 Spaceport America's Foundation Banner
Posted by L. A. Green at 10:53 AM