THE 5 BEST AND WORST THINGS ABOUT STAR TREK


I had a blast last weekend playing the part of Big Time Author at the Shore Leave Science Fiction Convention in Hunt Valley, Maryland. I signed books at the Meet the Pros event and in the Dealers’ Room, geeked out at a session with DEFIANCE stars Jaime Murray, Tony Curran and Jesse Rath (the love-to-hate-’em Tarr family) and sat on three pro panels with other authors.

I had the most fun at one of those panels: The Best and Worst of STAR TREK and STAR WARS. The panel was originally supposed to be a Battle Royale between fans of the various TREK incarnations, in which I am always prepared to defend The Original Series above all others. But an overabundance of panels meant we had to combine ours with one about the best and worst of STAR WARS. Which meant we ended up with  fans of the two largest franchises in SF history in the same room. Anyone unfamiliar with SF might be naïve enough to ask why that is a problem. (Mundanes often confuse  the two anyway.)  Anyone else knows to batten the hatches.

Well, it’s not like the old days. Everyone played nice and left the bat’leths and light sabers at home. Many of the writers on the panel had written pro novels in both universes. But it did give me an idea for this blog.

So, here, IMHO, are my five best and worst things about TREK:

--Technology. The special effects might have been less than stellar in the early going, but you can’t discount the inspirational effect of TREK’s tech. The communicator is now in everyone’s hands because a guy who watched that show wanted to make it happen and invented the cell phone. NASA, computer labs, biotech firms and engineering companies everywhere are full of people who grew up on TREK and want to see that stuff become reality.

--Vision. And talk about inspiration. Not just the tech, but the kind of world we want to create, with a bridge full of diversity and a mission to explore, not dominate.

--Adult Perspective. This may seem a strange quality to praise in a show that has spawned generations of cosplaying, action-figure-collecting fans, but the concerns of TREK are not coming-of-age, finding our true roles in life, accepting/rejecting our fathers’ choices or any of the other concerns of young adults. They are more about accepting the “evil” that may be part of us, negotiating difficult relationships with others, leading men and women through impossible hardships, the immediacy of war vs. the delicacy of diplomacy, the nature of love, responsibility, duty, friendship. (Let’s hope J.J. Abrams remembers this before it’s too late.)

--“Darmok”.  One of the best episodes in TREK comes not from TOS, but from NEXT GENERATION in “Darmok.” Captain Picard and the Enterprise encounter an alien culture that communicates entirely in allegorical phrases, negating the ability of the translator to help them bridge the communication gap. This episode stands out because the aliens in it truly think differently. And for once, TREK’s tech is of no use; only the human ability to make an intuitive leap saves the day. Kirk would have been proud.

--Wesley Crusher. See “Adult Perspective” above. The presence of Wesley on the bridge seriously disrupted the TREK force. Chekov came close to this annoying role in TOS, but he was older, and everyone had permission to ignore or abuse him.

--Similarly, anytime there were children on TOS Enterprise, trouble—and bad acting--ensued. “And The Children Shall Lead” comes to mind.

--Cheesy effects. We all know they did the best they could on TOS, but sometimes you just have to close your eyes and ears. And, seriously, if the turbulence is that bad, couldn’t you just install seat belts? So many bodies on the bridge!

--ENTERPRISE. Almost everything about it. I love Scott Bakula, but he was seriously miscast in this murky “prequel” to TOS. We went nowhere and we did it tentatively, hounded by Starfleet Command back home and the interfering Vulcans along the way.

So, what do YOU say? What are the best and worst of TREK in your opinion? 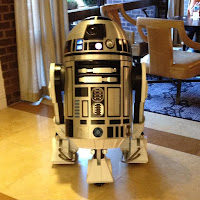 And, since I’m not a huge STAR WARS fan, I leave it up to our resident STAR WARrior, Laurie, to give us her list of the best and worst of SW.  I can just kick it off by offering my best—Han Solo—and worst—JarJar Binks—may he be encased in carbon forever.