GIVE A BOOK, GIVE A WORLD 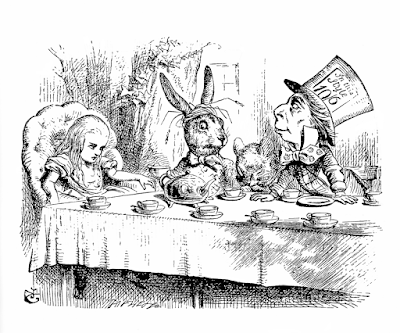 When I was nine years old, my much older brother gave me a book for my birthday. It was a big, heavy, hardback copy of the complete works of Lewis Carroll.

This was no watered down kids’ version of Alice in Wonderland, with lots of colorful pictures and a few whimsical words that told Carroll’s story in easy-to-understand form. No, this was the real deal, with the original black-and-white Victorian drawings by John Tenniel and the dense Victorian writing, too. It was WAY beyond my skill level, and included poetry, for God’s sake.

I loved it. I struggled for years to read it. And I’ve carried it with me through all my moves, even here to North Carolina.

A few years later that same brother gave me the complete works of Arthur Conan Doyle. Same thing, though I’ve passed that one on to my daughter who reads.

A gift of a book is like no other gift. It says as much about the giver as it does about the receiver. I’ve always treasured these books not only because they opened wonderful new worlds for me, but also because they meant my brother thought I was smart enough to read them. I worked hard to live up to them, to devine their secrets, because that would help me understand my brother—and his world. He was smart, and I wanted to be like him.

But what he knew, and I eventually discovered, was that the books held their own marvelous appeal. The stories they contained captivated me, swept me away to another place and time. They weren’t my first or necessarily my favorite such fictional worlds, but they were certainly a level up from the Nancy Drew mysteries I was fond of at the time.

Book revelations can come to you in surprising ways. I found Ian Fleming’s James Bond by looking out a high school bathroom window. I was there between classes, hanging out with my friends. I looked out and saw a pink cover (maybe it had once been red—rain had damaged the book) splayed in the grass. I could read the title—Diamonds Are Forever—and knew it for what it was. I suspect someone was reading the juicy parts out loud to a friend when a teacher walked in. Whoops! Out the window it went!

I waited all day to retrieve the abandoned piece of salacious writing, worried the whole time that its owner would go back to get it. But it was still there at the end of the day, pages woefully swollen with damp. I took it home and dried it with a hair dryer—you know, the kind you put over your head like a cap. (The year was about 1966.) Then I devoured it. Wow! James Bond was one sexy guy!

Then I went out and spent all my allowance and babysitting money on others in the series. My mom finally noticed and wanted to call a halt, thinking maybe I was a little young for all this. I convinced her I was “mature” enough by suggesting she read one. (he he!) Since most of the action was implied, she relented. I only gave up my 007 series last year when I moved to NC.

Finally, I have a long grocery store line to thank for my career as a romance writer. I was standing there, bored, having read all the fantastic headlines on the NATIONAL ENQUIRER to my left, when I looked to my right. I found a display of paperbacks, which was unusual in itself. But in that display was a dramatic dark cover highlighting a beefy male biceps with a tattooed circlet. Oooh! I picked it up and checked the back cover. Seems this was a time-travel romance (Kiss of the Highlander) by Karen Marie Moning. Say what? Who knew there was such a thing? I bought it to find out more—what’s it like? Who writes such a thing? Who publishes such a thing?

Once again, the story swept me away. I loved it. I bought the whole series. And the science fiction story that I’d been struggling with suddenly worked as a science fiction romance. The rest, as they say, is history.

Books can come to you from anywhere. Take it as a gift and be grateful to the universe. Or be the agent of change and give a book you love to someone special. They will love you for it forever.

My brother Reg who gave me those special books has had a rough year. But he’s having a birthday this weekend (July 3). Here’s wishing him a spectacular year ahead, full of health, love and happiness!