Life is not a dress rehearsal 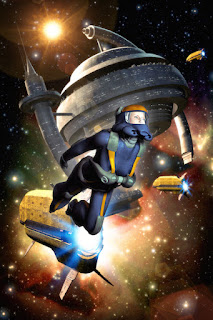 After finishing writing a series of blog posts about my latest travels, which you'll find on my own blog, should you be interested, it's time to get back to the business of writing that new story I'd started. I re-read what I'd written so far, and confirmed that I need to think about the plot a bit more, and that got me to thinking about the business of writing.

My first novel, a historical fiction story about the wreck of the Dutch merchantman Batavia in 1629, was published in May 2010. It was almost a year later that my first SF story hit the ebook stands. That was The Iron Admiral: Conspiracy. I've got nine full novels under my belt now, and a number of shorter works. Have I learned anything on this journey? I hope so. Here's some advice I might have given to my younger self, or anyone starting on this journey.

The story's the thing

Sure, grammar and spelling matter. They are the storyteller's stock in trade. There's a big difference between "let's eat grandma" and "let's eat, Grandma". "We drug the body to the river bank" will toss me out of the story, and it's surprising what something like ["I think we should go now." He said.] does to the reading flow. Even so, if the spelling and grammar are flawless but the story is boring, as an author you've missed the point.

Genre is a marketing ploy

I was just reading an article about 'literary horror' books. It's worth reading the first section for the author's attempt to answer the question 'what is horror?'. Here at space freighters we often ask ourselves 'what is science fiction romance?' and find ourselves trying to define a relationship between two genres. Sometimes the discussions over those definitions can get downright acrimonious. But at the end of the argument, it's whatever takes your fancy. If, as an author, you want to write about sexy times in a spaceship, so be it. You'll have an audience. If you want to write a mystery story with a romance arc thrown in, you'll still have an audience. Write what you're comfortable with. But bear in mind if your story fits (sort of) into more than one genre, you will cop criticism from multiple sides. In the case of SFR, you'll be caught between the twin horns of not enough/too much romance and not enough/too much science fiction.

What readers think is none of your business

There's so much finger-pointing, so much mocking. You've heard the knockers - E.L. James's FSoG is rubbish. J.K. Rowling can't write. Dan Brown's books are awful.  But that's just somebody's opinion. Books are the simplest of virtual reality devices. They take a reader out of the here and now and take them somewhere else in space and time. But what works for some readers doesn't work for all readers. So be it. There's no point in getting your authorial knickers in a knot over it, which is why I hardly ever read reviews of my books. (Taking advice from trusted beta readers is another thing altogether.) I can't afford to get my skin Teflon-coated, and I'm not going to change my books to suit a subset of readers. If they don't like my stories, there are plenty of other books out there which may be more to their taste.

Editing advice is not always worth taking

Remember Authonomy? You loaded at least ten thousand words of your opus onto the site, and invited other would-be authors (and a very few readers) to comment on your work. You'd get several opinions, some undoubtedly contradictory, about your first three chapters, offered by 'experts' who knew as much about writing as you did, and quite often, knew nothing about the genre your book fitted into. I was there, happily giving advice to anybody who wanted it.  After all, I'd done three novel-writing courses, so I knew of what I spoke. Don't use adverbs, be careful with the adjectives, passive voice is a no-no, trawl through for 'that' and 'was', watch out for point of view, don't use prologues. These days I take the wise wizard's approach to doling out advice, which is to avoid doing so at all costs. Every author has his/her own style. Some I simply don't like to read, for example, first person present POV. But that's just me. Some people love it. If I'm beta reading for somebody, I might point out typos or grammar errors, but my main role is simply, does the story work for me? If I think something is confusing, or missing (in my opinion) I point it out and let the author fix it – if the author agrees it needs fixing. Oh – and giving advice on ONLY the first three chapters has limited value. When it's out there, the whole book has to stand, not just the first three chapters.

Watch out for con artists

The writing business, especially with the advent of self-publishing, is rather like a gold rush. Everybody thinks they'll make a motzer out of their first novel. Not that one? Then maybe the next one. Not that one? But if I get a few more books out there, I'll have a back list and they'll start to read them all…

Somewhere else, a clever brain realises there are opportunities to be had. Just like at the goldfields, where the fellow who sold shovels and wheelbarrows, or the couple who built a rudimentary pub, or the Chinese family who created a market garden – all these people would probably earn much more than the miners, of whose number only the lucky few would strike it rich. As an author, you'll find plenty of (paid) marketing opportunities, some useful, some not. Some competitions are worth the entrance fee, others have no real credibility. Some boxed set opportunities may be worth your time, others are just a con.

Here's some advice – join a group of like-minded authors, such as the SFR Brigade, where these opportunities are discussed and evaluated, giving you a chance to make an informed opinion. And you'll have willing shoulders to cry on if you need some support.

There's nothing wrong with giving up

For the vast majority of people, writing is a part time thing they do in between kids, jobs, and life. Some people feel compelled to write. Fine. Write. But if your lack of success is getting you down, if you're getting depressed because you've realised you haven't caught the public imagination like J.K. Rowling did, then don't feel you have to keep doing the Sisyphus thing. Find something else that makes you happy. If you're one of the 'never give up' crowd, that's okay, too. If you do give up and later you want to try again, that's fine.

Remember, life is not a dress rehearsal. You'll never get another go at it, so do what works for you.

And here endeth the lesson.