I’ve been on a bit of a roll with my SFR manuscript Unchained Memory lately, all praises to the Forces of Good in the universe. God (big G) and the writers’ gods (small g) have smiled and granted me some small progress on the slog toward publication with a big contest win, a couple of contest finals and some potential interest from the people who really count—agents and editors. I’m excited, gratified and hopeful, while at the same time trying not to read too much into anything.

These small successes have me re-examining my goals as a writer almost as much as a series of setbacks would have. I’m not rethinking those goals, but touching base, just making sure I still know what I’m trying to accomplish with all this. Questioning oneself is common when the contest feedback is negative or the queries all come back as rejections. I'm a little surprised to find myself doing it when things are going the other way.

My first “real” job once I got out of college was as an administrative assistant (they called us “secretaries” then) to a self-made millionaire, a man who spent all day in an office tracking his investments, making more money. He had started out as a teenager selling Bibles door-to-door, worked his way up to the position of treasurer of the company and made a fortune when the company was sold to Times-Mirror Corporation. He was in his forties when I met him.

He asked me in the job interview to describe my five-year plan. I believe my answer was, “Huh?” He hired me anyway, but he gave me an assignment to write one up. The resulting plan in no way resembled my life beyond that point, but the idea stuck. I’ve been trying to think ahead, to have goals and plan for them, ever since.

The amazing thing is, when you are serious about setting those goals and working toward them, you often end up reaching them. I believe in having dreams. But success is less about dreaming and more about working for what you want. Dreams stay dreams because they tend to be nebulous. Goals require that you spell them out so you can make them happen.

Newbie writers get an earful of goal-setting and planning in motivational talks at RWA conferences and chapter meetings, in workshops and the like. All that nudging is useful because it can help get you from a pile of disorganized musings to an honest-to-God novel or from one manuscript to a marketing plan. Some of that incessant urging to think about where I was going made me consider the need for social networking, how to approach querying, where contests fit into my review process and so on. Without an overall plan, I might have been trying things hit-or-miss, or ignoring them altogether.

But I think our goal setting has to go above and beyond simply planning for the next stage in our writing, or even the next few years in our writing careers. And that is why I find myself pondering an essential question, even though things are heading in the right direction. Why am I doing all this, after all? Why all the hours of work, the anxiety over this judge’s reaction or that agent’s response, the endless drive toward improvement with the next draft, the next book? What is this writing thing, anyway?

I found an echo of this question in the speeches Nora Roberts and Jayne Ann Krentz gave at RWA Nationals in July. Both women, veterans of decades in the business, winners of multiple honors and, in Roberts’s case, one of the most successful writers in the world, spoke to the difficulty of riding out the market’s vagaries, of finding something of your own to hold onto through all that this hard business had to throw at you.

Just saying you want to make the NYT bestseller list in five years is not enough. Just saying you want to write and sell a book you can be proud of once a year for the next fifteen years is not enough. There has to be a reason you are doing those things. For fun? I think not. This ain’t fun most days. For profit? Good luck. Most working writers still hold down a day job. For fame? Maybe for fifteen minutes. On your chapter loop.

Harlan Ellison once said that he was a writer because he couldn’t not be a writer. That’s a little closer to what I’m after, though Harlan would be the first to admit he wouldn’t be happy just writing in a journal for himself. Neither would most of the rest of us. Writing, after all, is about communication. And publication is about communicating with the biggest, broadest range of readers possible.

Now here’s where it starts to get deep, maybe in more ways than one. By seeking to communicate through our writing, we’re seeking to touch those readers in some way—with an idea, with a vision, with a character or a relationship, even with something so elementary as laughter or tears. Maybe we have consistent themes that we return to over and over in our work that resonate emotionally with readers and mean something to them. Maybe our work is more political or thought-provoking. Maybe we’re even smart enough (or naive enough) to have something profound to say about the human condition.

Whatever it is, the best writing aspires to reach out, from mind to mind, from heart to heart, to make a connection. That is the ultimate goal, the one we should all be striving to attain.

Co-blogger Donna S. Frelick has won the TARA Contest Paranormal category with her awesome Science Fiction Romance manuscript, Unchained Memory.
Many congrats Donna on an impressive win!
~~*~~
Posted by L. A. Green at 8:42 AM 4 comments:

It's Time to Burn Badjuju 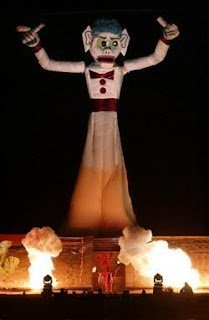 Last year, Spacefreighters Lounge reported on the annual tradition in Santa Fe, New Mexico of burning Zozobra. This ritual flaming of the "Old Man Gloom" effigy represents letting go of all the cares, disappointments and griefs that have accumulated in the past year. For weeks prior to the event, residents converge on the offices of the Santa Fe Reporter to leave artifacts of their troubles. The monstrous puppet is then stuffed with these notes, documents, photos, legal papers, and other representations of aggravation and set ablaze before a crowd of thousands.

Last year, we suggested that writers need their own version of Zozobra and many agreed, coming up with the name "Badjuju" for our version.

Today, we're building our Badjuju to torch along with Zozobra this evening. Help us stuff our "Writer's Old Man Trouble" with your rejection slips, deep-sixed manuscripts, misguided reviews, low contest scores, delusional judge's comments, and other worries and woes so you can watch them go up in a blaze of glory.

What would you stuff into Badjuju?