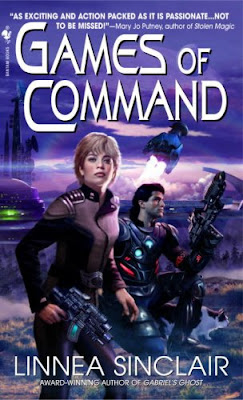 Captain Tasha Sebastian is suspicious of Admiral Branden Kel-Paten's nonnegotiable request that she serve on his flagship as first officer. She fears what he really wants is her head on a platter. She and the biocybe admiral are old adversaries who have faced-off countless times. But an uneasy alliance between her resource-rich United Coalition and his technologically-superior Triad has changed the rules. She has no idea that his rules changed long ago.

In June of 1908, something exploded in Siberia, devastating everything for nearly 800 square miles. The cause has remained a mystery.

Has the site of a possible impact crater now been located?

Quick Tour of the June Sky

Go to Hubble Site for a four minute tour of what to look for in the June night sky. The position of stars, constellations, planets, and deep space objects are explained. Amazing stuff.

Hubblesite has been added to the list of Sci-Fi 101 reference links at the lower right.
Posted by L. A. Green at 12:26 PM 2 comments: 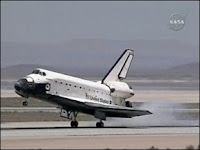 A great article on the moons of the solar system from the Sierra Vista Herald (Arizona):

I printed this one for my research files.
Posted by L. A. Green at 3:30 PM No comments:

Located right in the neighborhood (in astronomical terms), Eta Carinae is a very bright, very unstable star. Only about 7500 light years distant, the star is believed to be consuming its internal nuclear fuel at an alarming speed. Is it close to its explosive demise?

From Whence Came The Name...

Thought this might be an entertaining read for my blog buddies. This is the excerpt of an early (and now axed) opening of my current WIP that gave this blog its name. :)
Sair pulled open the plain steel door of the Post, his gaze sweeping the dim interior as he slipped inside. From the nearest seat, a Parol swung his head around and snarled, exposing sharp orange fangs. Sair’s heart skipped. If he hadn’t seen a Parolian smile before, he would have jumped back.
He glanced down at his thigh sheath and frowned. Going for one of his weapons had never crossed his mind. He’d survived his brief walk through the dusty streets of Eliptis, but it proved to be an unsavory experience. Focused on his destination, head up and sunshield in place over his eyes, he ignored the rough-faced crewies and hangtown beggars that moved aside as he approached. Being Rathskian offered that advantage. His subspecies’ reputation got him to the Spacefreighters Trade Post in one piece. Now he had a slim chance to escape.
Sair allowed his eyes time to adjust to the low light of the large, gloomy hall. He spied no towering Ithians or fellow Rathskians milling about. No shoulders or hats bore the purple hexagon of Ithis, the blue four-pointed star of Rathskia or tri-tone triangle of the Ithian Alliance. He removed his eyeshield with care. It was a risk exposing his face, but leaving the device on indoors might bring unwanted attention.
Sair avoided the row of dispatcher’s windows, looking for the spot where less official transactions might be conducted. Spying a door in the back, he moved toward it. A large sign in Dartian script hung on the wall: Spacefreighters Lounge.
Sair walked through the connecting passageway, turning his face aside as figures stumbled past in the darkness. He halted at the entrance and scanned the room. Inside, pilots and crew of many subspecies hulked over the bar or carried on quiet discussions at a number of booths and tables swallowed in gloom. Pirates and privateers, from the look of most. And no doubt more than a few bounty hunters. Thick smoke hung in the air, a pungent mixture of Dartian tobac and contraband. Sair choked back a cough, glad to have the extra concealment of the dark haze. When no one glanced at him, he moved forward to prop a foot on the floor rail of the bar.
Pressing a coin to the counter, he slid it across to the attender. “Billins, if you have it.”
Posted by L. A. Green at 3:59 PM 2 comments:

ApolloCon 2007 will take place on June 22-24, 2007 in Houston, Texas. This conference is for broadbased Sci-Fi/Fantasy/Horror interests and is attended by fans, writers, authors, editors, artists, actors, musicians, etc. Sounds like a blast. I hope to make it next year.

Other special guests include artist Jeff Sturgeon and many more.

Looks to be a fantastic event!

Email ThisBlogThis!Share to TwitterShare to FacebookShare to Pinterest
Labels: ApolloCon

Link In A Wink

Stephen Hawking, the British theoretical physicist whose book A Brief History of Time stayed on the British Sunday Times bestseller list for an amazing 237 weeks is working on a science fiction novel targeted at mid-grade children. Hawking will co-write the novel with his daughter, Lucy Hawking.

Read more about it: http://www.azcentral.com/ent/arts/articles/0614hawking0614.html

More on Stephen Hawking: http://en.wikipedia.org/wiki/Stephen_Hawking
Posted by L. A. Green at 8:01 PM 2 comments:

Robot Code of Ethics Drawn Up in South Korea

I stumbled on a new research site that looks like a lot of fun. Read articles on the Egyptian City of Sin, High Tech Frontiers, and Space Tourism and follow links to dozens of interesting cutting-edge topics. This is a must see site for sci-fi and sci-fantasy writers.

An example of just one of the links that intrigued me:
Robot Reptile "Released" Into Wild from National Geographics News

What blends the exhilaration of skydiving with the wonder of spaceflight? Space Diving. What is it? Thrill seekers take note: It entails jumping off a rocket ship with a parachute at an altitude of 120,000 feet or more.

Space activist Rick Tumlinson's latest venture is in the early planning stages, along with a sister endeavor Orbital Outfitters.

Read more about it here:

Today marks one month since the inception of Spacefreighters Lounge. A milestone. Or should that be parsecstone? Hmmm...

Another landmark--or spacemark?--as of today the blog has 500 hits. Not bad for its first lunar cycle of operation. ;)

Thanks to all who have docked at Spacefreighters' Lounge.

First Photo on left: Rags To Riches wins the Belmont Stakes today. She is the first filly in 102 years (1905) to win the Belmont Stakes, beating the best colts in her crop to do so. She is also the winner of the Hollywood Oaks, the fillies' Kentucky Derby.

Second Photo on right: Ruffian winning one of her many races. Ruffian is considered the greatest filly in racing history, if not the greatest racehorse of all time. She is the only horse to be buried on the infield of the Belmont track, with her nose pointed toward the finish line. The movie about Ruffian debuts tonight on ABC, 9PM Eastern.

Racing history was made today. Has the baton been passed? 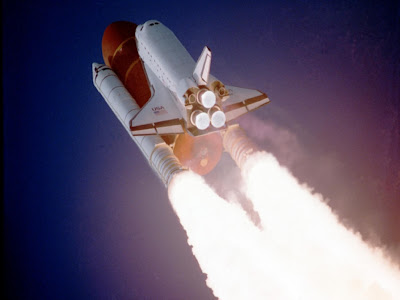 We have lift off.

The Space Shuttle Atlantis began the first mission of 2007 this morning.

NASA hopes to complete twelve more construction missions to the space station (in addition to this one). A repair of the Hubble Space Telescope is also planned before the shuttle fleet is retired in 2010.

Clayton Anderson will replace astronaut Sunita Williams representing the U.S. aboard the international space station. Williams will return to Earth with the Atlantis crew. She has been in orbit for the last six months.

Click here for a link to wallpaper of the above photograph:
http://www.dailybuddy.com/wallpapers/atlantis_liftoff_1024.htm
Posted by L. A. Green at 6:22 PM 1 comment:

What the heck is The Toasted Scimitar, you ask? It's a brand new Fantasy Pub blog co-hosted by four writers. (Uh, yes, you guessed it. The blogger known as Mission Control would be me.)

When you've downed your Dartian Billins and Romulan Ales, be sure to stop by and say "greetings". Oh, and be sure to check your swords and amulets at the door. :)

http://toasted-scimitar.blogspot.com
Posted by L. A. Green at 8:00 PM 1 comment:

The countdown to the first shuttle launch in 2007 began Tuesday at 9 p.m. EDT.

The 7:38 p.m. EDT Friday window is NASA's first opportunity to launch space shuttle Atlantis. There is a 70 percent change the weather will cooperate.

The shuttle will conduct an 11-day mission carrying seven astronauts. Its primary objective is to deliver a third pair of solar wings, which help power the international space station. Three spacewalks are also planned to continue construction of the orbiting outpost.

Link in a Wink: SpaceRef.com

A great resource for the latest in space exploration and related topics. Read an article about COPUOS: The United Nations Committee on the Peaceful Uses of Outer Space. Tomorrow, June 6, marks the start of the 50th Session, where a High-Level Panel on Space Exploration will discuss plans for space exploration. Where are we going from here?

The site offers some neat products, too. How about an Orion Crew Exploration Vehicle poloshirt to sport on those trips to the mall? Or an Arthur Clark Mars Greenhouse mug for your morning coffee?

Here's the "Home" link to add to your list of references: http://www.spaceref.com/

This site will be added to our permanent resource list on the side panel for future reference.
Posted by L. A. Green at 12:00 PM 1 comment:

A mysterious cross-fictional rift (and very clever editing) pits Star Trek's Kahn and the Federation Starship Reliant against Star War's Han Solo and his Millenium Falcon in this YouTube gem.

That's the title of this article from Daily Express. A must read for science fiction writers (even if only for the entertainment value).

http://www.express.co.uk/posts/view/8730/Can+science+fiction+beat+Bin+Laden
Posted by L. A. Green at 8:09 PM No comments:

Shapeshifters are often present in Science Fiction and Fantasy literature as beings who can alter their appearance at will to look like something--or someone--else. But do shapeshifters exist in nature? Look at the YouTube videos below and decide for yourself.

http://www.youtube.com/watch?v=zjycOCyUZ1c
Beyond camoflage. A short 54 second video with no sound, but amazing images of one of nature's shapeshifters.

http://www.youtube.com/watch?v=SCgtYWUybIE
A 40+ second video with no sound. Watch carefully! Whoa!? Miss it the first time? Never fear. A slow motion/reverse follows. You still may not believe your eyes!
Posted by L. A. Green at 12:59 PM 1 comment: