Check the skies in the early morning hours of August 28. A lunar eclipse--one of the longest in seven years--will occur.

Excuse the sudden lack of posts and commentary on this blog. Real life has intruded in a big way and forced a temporary hiatus from my blog duties.

I'll be back with more content and rambling very soon. I've got some great sci-fi and futuristic novels in my TBR (to be read) pile, so expect more reviews in the pipe soon, too.

Meanwhile, drop a comment and let me know what you've been up to lately.
Posted by L. A. Green at 6:56 PM 4 comments:

THE DOWN HOME ZOMBIE BLUES

Check out one of my sister blogs, The Toasted Scimitar Pub:

This is a fun and educational article with lots of interesting links. Recommended for Sci-Fi writers and fans alike.

http://encarta.msn.com/encnet/Features/Columns/?article=BN_Extraterrestrials>1=10289
Posted by L. A. Green at 7:33 PM No comments: 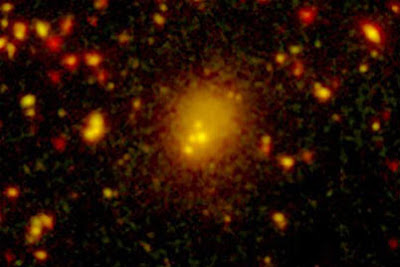 Four galaxies in a monster collision that might form the largest known galaxy in the universe. Story and photos can be found here:

The Life and Times of Light

But the distances are so enormous that what we're seeing by the time the light reaches us is the situation as it was tens, hundreds, thousands, even millions or billions of years ago. Sometimes what we're seeing may have occured before Earth even existed. It is, quite literally, like looking back through time.

Imagine seeing your neighbor pick up the morning paper and wave, except what you are seeing happened yesterday, or a week ago. You don't even know if your neighbor or their house are still there, although chances are pretty good that they are.

The interlinking elements of light, distance and time are important ingredients in writing Sci-Fi. Suppose Starship X sees Planet Z through their futuristic high-powered telescopes, some 16 light years distant, and decide to go there. Planet Z looks like a great place to visit. Acceptable proximity to its sun suggests warm oceans, tropical vegetation, maybe even classy nightclubs. Just the place for the weary crew to enjoy a bit of planet-side shore leave. They plot a course using their hyperdrive, but when they arrive they discover Planet Z ceased to exist the year before. In order to visit, their ship must have the ability to travel much faster going to the planet than the light carrying the image of Z did coming from the planet, so the status quo is unknown until they arrive. What they saw was Planet Z as it had been 16 years before. Meanwhile, well...there went the neighborhood. The "messenger" was carrying old information. The crew may be in for a rude surprise. Especially if Planet Z was obliterated by an astronomical event or attack by another civilization. So much for their vacation.

Light doesn't always have an uneventful voyage as it shoots through universe. It can be affected by gravity, deflection, refraction and absorption. Gravity can bend it (as Einstein surmised in his Theory of Relativity), and black holes can swallow it. For light to be generated in the first place, some sort of event had to take place--fusion or an explosion.

Rough neighborhood, the universe. It isn't easy being light.

MSN has a great series of photographs from space. All different topics. This is a great resource for Science Fiction writers to add to their list of references. I did.