Today I have the honor of hosting award-winning author S.E. Smith who will tell you all about Chummy and Pi, her cute-as-buttons pets in space. They appear in her story in Pets in Space 6, Behr's Rebel.

Chummy and Pi: Pet Characters You Fall in Love With 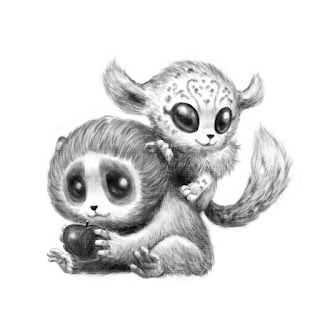 One of the things I love the most about Pets in Space™ is the pets.

I’ve been fortunate enough to have been in every Pets in Space™ since the anthology was first released. Over time, my pets have evolved along with my characters and stories.

In Behr’s Rebel, I returned to one of my favorite worlds and the fight for freedom. This fight includes two very innovative characters named Chummy: A small, black and white spotted Quazin Chumloo. Quazin Chumloos are endangered. Chumloos are extremely intelligent with telepathic, psychoscopy, and levitative abilities; and Pi: A tan and white Marica Peekaboo and considered extremely rare. Marica Peekaboos possess telekinetic, precognitive, and apportational abilities, making the exact numbers of Marica Peekaboos in existence difficult to calculate.

As you can tell, Chummy and Pi have very unique personalities and abilities. Many of my ideas come from the world around us and the special abilities many animals possess. From a mountain goats’ ability to scale vertical mountains to the moths and other insects that blend in so well with their environment they are virtually unseen, I knew my two characters possessed unique abilities that would make them more than a pet—they are friends.

Chummy and Pi are a vital part of Raia and Behr’s world and interconnects the worlds of the Marastin Dow, the Sarafin, the Curizan, and the Valdier with the human characters. I invite everyone to discover the magic of Pets in Space 6™ and the fascinating worlds filled with pets you want to love, cuddle, and take home with you. I hope you enjoy Behr’s Rebel: Marastin Dow Book 2 and the special release of Raia’s Pets: A Marastin Dow Short written just for you and only available with Pets in Space 6.

I don't know about you, but I can't wait to read all about these gorgeous little guys and their humans.

If you haven't pre-ordered your copy of Pets in Space 6, you still have time. Remember, 10% of all sales goes to Hero Dogs, a wonderful organization which trains service dogs for veterans.

Pre-order your copy of PETS IN SPACE 6
Posted by Greta at 4:00 AM No comments: 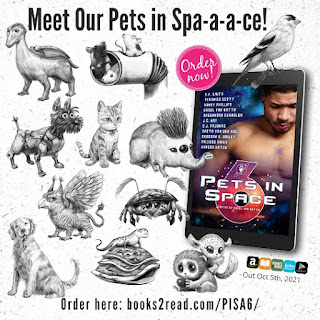 Pets in Space© 6 is almost here! On 5th October you'll receive your copy of the anthology if you pre-ordered, or you can buy your copy for immediate download! Eleven brand new stories from eleven writers of science fiction romance to brighten up your day.

You'll be treated to a veritable beastopia of familiar and unfamiliar critters, all doing their best to help their humans in pursuit of true love. Here's the line-up.

BEHR’S REBEL
Marastin Dow Book 2
by S.E. Smith
Chummy and Pi are cute and fluffy alien pets. They’re pretty sure they rescued Raia, the human woman they travel with, not the other way around. In any case, it’s going to take all three of them to rescue a Marastin Dow General who is slated for execution.

STAR CRUISE: TIME LOOP
Sectors Romance series
by Veronica Scott
Eyn, a three-eyed lizard, has a multi-layered shell, but likes to spend time with his owner, Raelyn. Good thing, too, since she’s reliving the same terrible day. If she can’t get out of the time loop, everyone on the interstellar cruise ship she’s on will die, including the man she’s falling in love with.

THE CYBORG WITH NO NAME
by Honey Phillips
A robot dog is Rose’s only companion in the Martian outback. He’s a quirky collection of mismatched parts, but he’s hers. Despite what her former employer thinks, the outcast scientist knows the robots she developed to help with the terraforming process are more than machines. Especially when a robot horse she created shows up at her doorstep and leads her to an injured cyborg ranger.

ESCAPE FROM NOVA NINE
A Central Galactic Concordance Novella
by Carol Van Natta
Griffins in space… They’re small, birdlike creatures that were genetically engineered to look like miniature griffins from mythology. Against all odds, they’re thriving in the harsh environment of a rogue asteroid mine. They could be the key to survival and escape for prisoners Julke and Zade.

TRADE SECRETS
The Department of Homeworld Security series
by Cassandra Chandler
When is a cat more than a cat? When he’s a space kitten, of course. The kitten has already adopted alien Xan, who’s only trying to keep his friends out of trouble. Earth at large isn’t ready to learn that aliens exist. Then the kitten decides that human Gwen, who’s stumbled across their secrets, would be the perfect pet…, er, mate for Xan.

SEE HOW THEY RUN
TriSystems: Smugglers
by JC Hay
Positive, Negative, and Monocle are three ordinary-looking lab mice who are inexplicably accustomed to low-gravity. When engineer Baker steals them, she discovers they’re more than they seem. She hopes so, because it could save the life of her coworker, who means so much more to Baker than she’s willing to admit.

SURI’S SURE THING
Kimura Sisters Series
by S.J. Pajonas
Finn is a gorgeous, goofy golden retriever with a heart the size of the galaxy. He is pair-bonded with workaholic Suri, who would rather be in space than deal with her complicated family life. Finn knows Suri would be happier if she’d only notice her best friend Eric, so they could stay together. Maybe a trip to space would help her see the light…

THE THUNDER EGG
Dryden Universe Series
by Greta van der Rol
Neyru is a… well, no one really knows. She looks sort of like a tiny, winged dinosaur, and she might be psychic. All vacationing professor Drew knows is she’s beautiful and clever, and growing fast. If only he can convince sexy freighter captain Afra to help him get the little alien foundling back where she belongs.

WORLDS OF FIRE: METAMORPHOSIS
by Deborah A. Bailey
In the Worlds of Fire, people with magical abilities sometimes have familiars, animal companions they can talk to. Gargoyle shifter Jaydon has a gold-bodied, black-winged bird named Delphy. Student Asira has never met a familiar, and isn’t sure what to think when Jaydon says the only reason he agreed to teach her is because Delphy recommended her.

STRANDED ON GRZBT
by Melisse Aires
Mimi and her companions are stuck in an alien spaceport, trying to find their way back home to Earth. Mimi befriends and feeds a tiny alien creature the size of a mouse, with three eyes, six paws, and a trunk. Her new pet returns the favor by helping her meet handsome alien Kyre, who might be their best chance for survival.

ESCAPING KORTH
Before The Fall series
by Kyndra Hatch
Agronomist Liana Walker is a casualty of the Human-Korth war. Held captive and interrogated as an enemy combatant, her only friend is Rainbow, an eight-legged spider-like creature with a crab-like shell and large, soft antennae. Plus twelve eyes that allow Rainbow to see the truth when Liana can’t. Such as, her interrogator is the same Korth male she grew up with, before the war separated them.

You'll finally be able to find out what my pet, Neyru, is – and where she comes from.

Once again, we’ll be donating 10% of the preorders and first month’s sales to Hero Dogs, the excellent charity that provides trained service dogs to disabled veterans and first-responders.

Why don't you pre-order your copy now? The book will be delivered to you on the 5th October.

Pre-order your copy of PETS IN SPACE 6
Posted by Greta at 6:00 AM No comments: