http://www.ellorascave.com/Excerpts/Excerpt_PerfectTiming.htm
NOTE: You should be over 18 to visit this site, although I don't think anything in this snippet would warrant more than a PG rating.
Enjoy! And Congratulations, Barbara! 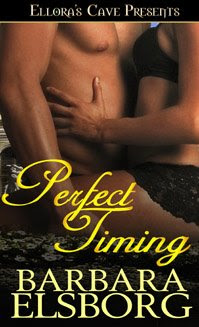 An interview with debut author Barbara Elsborg is posted on the Toasted-Scimitar. Barbara discusses the steps that got her first novel, PERFECT TIMING, to the point of being e-published. (Release date April 30th.)

Some good information here for aspiring writers. Be sure not to miss it. :)
Posted by L. A. Green at 7:06 AM No comments:

A Bit Quiet Here While We Party On STARS

My friend, co-blogger, IP (Indispensible Peer) and fellow romance writer, Barbara Elsborg, has a debut novel on the verge of release. April 30th is the big day. Ellora's Cave (e-publishing) is the publisher.

Until then, we're having a little Countdown Fest over on one of my other blogs, Take It To The Stars, where Barbara is a co-blogger. I may be a bit quiet there, but please feel free to join us there.

I'll also be posting an interview with Barbara Elsborg on Tuesday, April 22, on The Toasted Scimitar blog.

I'll be back soon with more articles, commentary and updates.

Oh yes, and don't forget the release of Lisa Shearin's ARMED & MAGICAL on April 29th. ARMED & MAGICAL, the second book of the Raine Benares Fantasy Series has received a 4-1/2 STAR RATING (the highest) from Romantic Times! In addition, the first book of her series, MAGIC LOST, TROUBLE FOUND has just been nominated for a Compton Crook Award as best debut novel of the year by the Baltimore Science Fiction Society! (See the reviews of both novels on this blog. Look for the labels with links on the lower right sidebar.)

Lots of exciting things happening this month!
Posted by L. A. Green at 2:29 PM No comments:

The Past Interfering with the Future

I would like to give credit for the following article, but alas, when I searched for the originator on Google, at least a dozen sites carried the following and no one was credited. Well, whoever wrote it first, it certainly makes you think about relativity in time and history.

The US standard railroad gauge (distance between the rails) is 4 feet, 8.5 inches. That's an exceedingly odd number. Why was that gauge used?

Because that's the way they built them in England and English expatriates built the US Railroads.

Because the first rail lines were built by the same people who built the pre-railroad tramways, and that's the gauge they used.

Why did "they" use that gauge?

Because the people who built the tramways used the same jigs and tools that they used for building wagons, which used that wheel spacing.

Okay! Why did the wagons have that odd wheel spacing?

Well, if they tried to use any other spacing, the wagon wheels would break on some of the old, long distance roads in England, because that's the spacing of the wheel ruts.

So who built those old rutted roads?

Imperial Rome built the first long distance roads in Europe (and England) for their legions. The roads have been used ever since. And the ruts in the roads? Roman war chariots formed the initial ruts, which everyone else had to match for fear of destroying their wagon wheels. Since the chariots were made for Imperial Rome, they were all alike in the matter of wheel spacing.

The United States standard railroad gauge of 4 feet, 8.5 inches is derived from the original specifications for an Imperial Roman war chariot. And bureaucracies live forever. So the next time you are handed a specification and wonder what horse's ass came up with it, you may be exactly right, because the Imperial Roman war chariots were made just wide enough to accommodate the back ends of two war horses.

Now the twist to the story...

When you see a Space Shuttle sitting on its launch pad, there are two big booster rockets attached to the sides of the main fuel tank. These are solid rocket boosters, or SRBs. The SRBs are made by Thiokol at their factory in Utah. The engineers who designed the SRBs would have preferred to make them a bit fatter, but the SRBs had to be shipped by train from the factory to the launch site. The railroad line from the factory happens to run through a tunnel in the mountains. The SRBs had to fit through that tunnel. The tunnel is slightly wider than the railroad track, and the railroad track, as you now know, is about as wide as two horses' behinds.

So, a major Space Shuttle design feature of what is arguably the world's most advanced transportation system was determined over two thousand years ago by the width of a horse's ass.
Posted by L. A. Green at 5:51 PM 2 comments:

Email ThisBlogThis!Share to TwitterShare to FacebookShare to Pinterest
Labels: Past Interferes With Future, Railroad Gauge and Space Shuttle 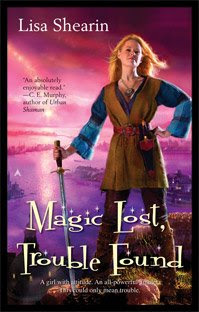 By now everyone knows what a huge fan I am of Lisa Shearin's Raine Benares series that started with MAGIC LOST, TROUBLE FOUND and continues with the April 29 release of the second book in the series, ARMED & MAGICAL (see previous reviews and articles on this blog).

Lisa just shared some great news:
This is what I've been waiting to tell everyone!! *HUGE GRIN* Since it's been announced over on Science Fiction Awards Watch http://www.sfawardswatch.com/ I can officially announce it myself:

Magic Lost, Trouble Found is one of five finalists for the Compton Crook/Stephen Tall Memorial Award for the best debut novel of the year. The award is voted on by members of the Baltimore Science Fiction Society and will be awarded at their annual convention (Balticon) on Memorial Day weekend.

Needless to say, I was thrilled and amazed to be included in such great company. Check out the other nominees -- WOW!:

Wow, indeed! MLTF gets my vote (uh...if I had one). Fabulous news, and I know of no more deserving author.
Congratulations, Lisa.
Posted by L. A. Green at 5:39 PM No comments:

Sunset at the North Pole 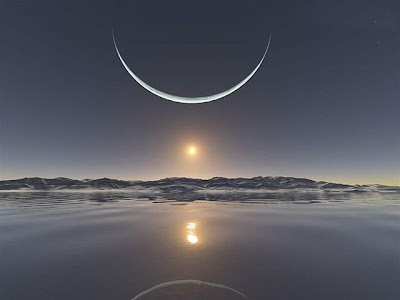 Arlene, one of my co-bloggers over on www.takeittothestars.blogspot.com sent me this pic and I was so amazed, I had to post it. I love the starkness, and the surprising contrast between and juxtaposition of the sun and the moon.

Wouldn't this be a great inspiration for an alien landscape?

Thanks Arlene. I'm going to add this to my collection of Favorite Sci-Fi Photos. I think it qualifies. :)
Posted by L. A. Green at 7:16 PM 4 comments: 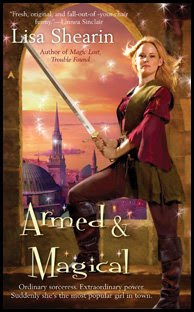 April is shaping up as a very special month. It's spring, the weather's getting warmer...and there are two fantastic books coming out soon.


First on April 29th, Lisa Shearin's ARMED & MAGICAL is released. This high-octane Fantasy romp is one you won't want to miss. See my former review for details.

You can pre-order ARMED & MAGICAL on Amazon, but if you haven't yet read the first book in the series, MAGIC LOST, TROUBLE FOUND I suggest you get them both for an amazing back-to-back read. 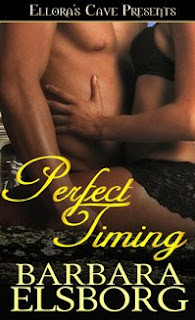 The following day, April 30th, my Take it to the Stars co-blogger and IP (Indispensible Peer) Barbara Elsborg's debut novel, PERFECT TIMING, is released by Ellora's Cave. As an avid reader of many of Barbara's novels, including this one, I can tell you she has a rare talent for writing both laugh-out-loud humor and very steamy love scenes.

This is the link to Ellora's Cave: http://www.ellorascave.com/

And here's a link to an interview with Barbara on EC's e-magazine, LadyJaided: http://www.ladyjaided.com/authors.html

We'll be counting down the days, hours, minutes (seconds?) until PERFECT TIMING is released on http://www.takeittothestars.blogspot.com/
Posted by L. A. Green at 8:08 PM No comments:

He is someone I remember, and mourn, for different reasons than most of the world. Charlie Carter was a celebrity with whom I shared a common thread. We grew up in the same stomping grounds as kids, tromped through the same emerald forests, traveled the same roads and snowmobile trails, crossed paths on a number of occasions. It was sometimes a very isolated place for a kid, and I, like him, spent most of my childhood in solitude--reading books, hiking trails, developing my lifelong appreciation for nature. His deep roots in the northern woods meant he had strong beliefs about certain issues, and later championed those causes to be revered--and hated--by millions.

He was born a year before my mother, and became an icon in his heyday when I was still in school. I often heard him refered to as "that local boy who made good." He became successful beyond the wildest dreams of most kids from those little podunk towns in the north country.

Many years ago I read a series of interviews on some of Hollywood's greatest stars. They were asked to describe their favorite places. There was Charlie Carter in a cartoon sketch, dressed as Paul Bunyon with axe in hand and leg propped up on a White Pine stump, declaring northern Michigan as being the area that held a special place in his heart.

He returned often over the years. I saw him in person several times, and was always too star struck to introduce myself, although everyone told me I should, that he never outgrew the earthiness of the place he was raised. They said he would talk to anyone. There's a saying that we will regret most the things we didn't do in life, rather than the things we did. I will always regret not shaking hands with Mr. Carter.

May he rest in peace.

"At his birth in a Chicago suburb on Oct. 4, 1923, his name was Charles Carter. His parents moved to St. Helen, Mich., where his father, Russell Carter, operated a lumber mill. Growing up in the Michigan woods with almost no playmates, young Charles read books of adventure and devised his own games while wandering the countryside with his rifle."