Which e-publisher is the most Science Fiction Romance friendly?

Vote in the weekend poll at SFR Brigade. (Click link below.)

from Spacefreighters Lounge﻿
Posted by L. A. Green at 7:28 PM No comments:

Book Review for Goodreads: OFF THE PLANET

Off The Planet: Surviving Five Perilous Months Aboard The Space Station MIR by Jerry M. Linenger

Excellent reference on life in space as told by an astronaut-cosmonaut onboard the failing Mir space station. At times fascinating, terrifying and eye-opening, it not only gave me some excellent material for my science fiction romance novels, but it educated, entertained and provided personal insights into several life-threatening events that were either withheld from, or grossly downplayed to, the general public at the time.

Personally, I would have preferred the story be told in sequence instead of having events grouped more by theme, but overall it was an engrossing read.

Email ThisBlogThis!Share to TwitterShare to FacebookShare to Pinterest
Labels: Dr. Jerry Lineger, Off the Planet

What Does the End of the Shuttle Program Mean?

Recently, while bemoaning the coming loss of our space shuttle program, I stumbled across an article titled '100-Year Starship' on the Drawing Board at NASA. *perk!* What's this?

Reading the plans for a one-way mission to an Earth-like planet in the future led me an even more delightful discovery -- The Tau Zero Foundation. The TZF is not an advocacy group, but an organization who will try to "convince the government to show more wisdom by consistently investing in humanity's future."

But that's a huge objective, so how will they go about it?

"Using the dream of reaching other worlds as both a long-range goal and a catalyst for near-term progress, the Tau Zero Foundation supports incremental advancements in science, technology, and education. As a private nonprofit (501c3) corporation, supported mainly through philanthropic donations, the Foundation seeks out and directs support to the best practitioners who can make credible progress toward this incredible goal and educate the public during this journey of discovery."

The Tau Zero Foundations activities states their goal of reaching toward the stars "...includes scientists and engineers working the technical challenges, sociologists and anthropologists addressing the implications for humanity, journalists and educators who inform the public on technical progress and its consequences, science fiction writers and producers who use this material to inspire future generations, and entrepreneurs who keep an eye open for revenue generation."

Who is involved?  Marc G. Millis, a rocket scientist who founded and led NASA’s Breakthrough Propulsion Physics Project from 1996-2002, along with over thirty other professionals including scientists, engineers, educators, fiction authors, journalists, and artists, including Karen Anderson, widow of the late Poul Anderson who wrote the novel Tau Zero, journalist Paul Gilster whose Centauri Dreams site keeps abreast of interstellar developments.

Even if the organization's advancement of space exploration doesn't particularly interest you, the site provides a good assortment of material and graphics to get the muse thrusters firing for any SFR writer. Want to explore generation starships?  Project Icarus?  Undiscovered physics? You can check out Tau Zero Foundation and its initiatives below: 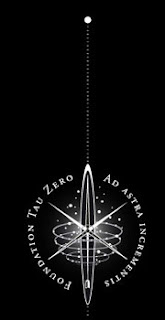 "ad astra incrementis"
This Latin phrase means:
"to the stars in steps, where each is greater than before."
Posted by L. A. Green at 6:27 PM 5 comments:

Ah, fall! The crisp bite of oncoming winter in the air; the crackle and crunch of colorful leaves underfoot; and, for those of us who have the misfortune to be Washington Redskins fans, the depressing Sunday nights crying in our beer!

But the best part about fall is the “official” opening of the new television season. Yes, I’ll admit it—I’m an unabashed fan of the Boob Tube. And I watch the old-fashioned way—on a screen at home in my “media room”, uh, basement. I’m not a complete Luddite, though. I have HDTV, DirecTV satellite, LED flat screen and DVR. That’s not to brag, but to let you know I’m serious about watching series TV (and not watching commercials). Nielson ought to be hooked up to me. But, of course, since most of the shows I like get canceled pretty quickly, it’s obvious the TV pollsters are polling everyone but me!

The early returns indicate this season may go down as one of the worst in recent memory for new offerings. You know when !@#$ My Dad Says (which all the critics have panned and even dedicated William Shatner fans like me can barely stand to watch) has been renewed, the competition must be truly dreadful. So it’s no surprise that the pickings are slim for SF fans.

Only NBC’s The Event can claim any real SF chops, with a storyline that involves aliens crash-landing in Alaska in 1944 and the modern-day consequences that ensue. Early episodes have been uneven, but the premise, at least, is interesting. The problem as I see it is that the themes are overworked—why are they here? good aliens vs. bad aliens among the crash survivors/tolerant humans vs. xenophobes among the people dealing with them, etc., etc. The real question is whether a restless audience and even more trigger-happy network decision-makers will give the show a chance to develop into something worth watching.

Viewing prospects are much better for returning shows, including the Battlestar Galactica spinoff Caprica, J.J. Abrams’ Fringe, and the final season of Smallville. If you haven’t been watching Syfy’s Caprica, start now. I cannot recommend this show too much. This is serious, character-driven science fiction, with both writing and acting above par, and some cool tech and special effects. Caprica lays out the events leading up to the revolt of the cyclons and the fall of humanity that sets the course of BG. And a fascinating series of events it is. Themes of religion, grief, personal choice, misuse of technology and the definition of the soul are interwoven throughout this show, without weighing it down with leaden dialogue or a preachy tone. TV SF just doesn’t get any better than this, folks.

Fringe, now in its third season on Fox, is hitting a “things look bad for our side” phase, with FBI agent Olivia Dunham imprisoned in the show’s alternate universe, “Fauxlivia” taking her place on this side, Dr. Walter Bishop and his son, Peter, on the outs, and Bishop’s “Walternate” on the other side up to no good. Personally all this makes me anxious. Abrams has a tendency to overcerebrate his plots, and it can get exhausting trying to keep up (remember Lost?). I’ll be happier when everyone is back in place solving weekly weird cases and trying to keep Walter off the LSD.

Case in point, the tenth and final season of the CW’s Smallville is off to a great start. This show began with a fine young cast, a genuine respect for the material, some terrific writing and, best of all, nuanced characters on both sides of the field. Michael Rosenbaum, especially, provided a multidimensional portrait of the conflicted Lex Luthor that made the perfect foil for Tom Welling’s self-doubting Clark Kent. That interaction has been sorely missed as we’ve been forced to endure season after season of the Chloe Sullivan and Jimmie Olsen show. Gack! I was only an occasional viewer during recent years and only because of the introduction of the hot and sarcastic Green Arrow (Justin Hartley). (And, please. Like he would be attracted to Chloe.)

This season, however, we find Lex’s little clone shrugging off all attempts to tame him. Lois Lane has finally figured out what all of Metropolis already seems to know, and she and Clark are heating things up to PG-13 level, at least. (Did I mention that young Tom is filling out quite nicely?) Clark is no longer running everywhere, for Krypton’s sake. Can the tights and cape—and destiny—be far behind?

So, there is plenty for SF fans to watch this fall. Then there is winter to look forward to, when the delicious V returns. Remotes at the ready and . . .click!