When You Wish Upon a Star

Impressions of the 2010 RWA National Conference
During the RWA Golden Heart ceremony at the end of the RWA National Conference in Orlando, a very magical song from this very magical place began to play--and although the music was instrumental, I could clearly hear the lyrics in my head.
When you wish upon a star
Makes no difference who you are
Anything your heart desires
Will come to you
If your heart is in your dream
No request is too extreme
When you wish upon a star
As dreamers do
Like a bolt out of the blue
Fate steps in and sees you through
When you wish upon a star
Your dreams come true
Those words resonated with me in so many ways.
It spoke of the many hopeful Golden Heart finalists, including our own co-blogger Sharon Lynn Fisher--finalling for the second year in a row (woot, Sharon!)--striving for and achieving the recognition that their manuscripts have made the cut in the toughest of all writing competitions for unpublished authors.
It spoke of the RITA finalists, published authors who have poured all their skill, talent, creativity and experience into their novels and now have the chance to be given the nod as the best novel of their category for 2010.
It spoke of the many attendees still pursuing their dream--on their own time and at their own expense--because they believe they will someday have the chance to introduce the world to their stories and the characters who, for now, exist only in their minds.
It spoke of the amazing work done by the RWA staff when the original site--The Opryland Hotel in Nashville--was flooded earlier this spring and it appeared that cancelling the 2010 conference might be one possible outcome.  But these are writers.  They're programmed to problem solve and overcome obstacles.  Instead they got to work on drafting a new ending to this story, relocating the 2010 conference to the Disney World Magic Kingdom in Orlando at last minute and not only carrying off a wonderful conference--but a SOLD OUT conference!  Amazing.
Yes, this was a conference to remember.
Orlando was my second RWA National and it was every bit as head-spinning as my first, held last year in Washington DC.  This time around, I had a better grasp of what to expect, and the excitement of meeting many of my peers from the SFR Brigade--as well as the chance to see and chat and scheme with my friends and co-bloggers here at Spacefreighters Lounge--Sharon and Donna--face-to-face.  Like Sharon said at our first get-together in the BlooZoo Lounge, it felt like we'd just seen each other yesterday, not over a year ago.
How did it go?  It was mahvahlous--and the hotel and grounds were gorgeous--but it all went so fast the days and events are a virtual blur.

Sharon and Laurie
On the first morning, I had breakfast scheduled with NY Times bestselling author Sharon Sala and RITA finalist Colleen Thompson.  This once-in-a-lifetime opportunity came about via my winning bid in the Brenda Novak Online Auction for Diabetes Research earlier this spring. Yes, I was nervous, but got over my case of jitters almost immediately. The wisdom these two warm and witty veterans shared was priceless for a still-struggling-to-break-in writer and an experience I'll never forget.  They also gifted me with signed copies of their novels as a super-duper deluxe added bonus!  (My one regret?  No pictures!  What was I thinkin'?)

Then it was off to a three-day whirlwind of workshops including an excellent workshop by Colleen Thompson (more details to follow), an invitation to the Golden Network event by Sharon where other Golden Heart finalists and several of my LERA local chapter members were in attendance, a long chat over drinks with Sharon and Donna at the Cabana Poolside Bar, amazing talks by keynote speakers Nora Roberts and Jayne Ann Krentz, more workshops, the Fantasy, Futuristic and Paranormal Chapter "The Gathering" Steampunk Costume Ball where Brigaders swept the costume contest, a search for kareoke (still in costume) and more drinks at the BlooZoo, more workshops including Donna and I witnessing the last ever presentation of Linda Howard's Twelve Steps of Intimacy (she announced she was retiring from public speaking at the conclusion!)...Donna is pictured with Linda Howard above...

Steampunk Costume   Donna at our table at The Gathering
Contest Winners
...exciting news and meetings swapped with peers in the lobby and corridors, and finally the Golden Heart/RITA Ceremony at the conclusion and witnessing fellow SFR Brigader Kylie Griffin win the Golden Heart. 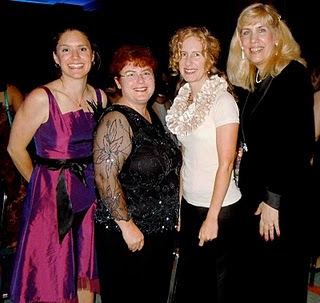 SFR Brigaders at the Golden Heart (left to right):
Erica Hays, Kylie Griffin (winner of the GH for Paranormal),
Sharon Lynn Fisher (GH finalist and co-blogger),
and Laurie Green (that would be me).
And then it was over.  Time to pack up the clothes, experiences, memories and head home to digest the calvacade of information, tips, advice, industry news and brainstorming sessions...and start planning what I want to achieve and where I want to go with my career in the coming year.
So long, Orlando.  It was a blast.
(You can see the full collection of pictures in the SFR Brigade web site photo album.)
Posted by L. A. Green at 10:13 AM

Email ThisBlogThis!Share to TwitterShare to FacebookShare to Pinterest
Labels: 2010 RWA