Thanks to Jessica Subject of Mark of the Stars Blog for awarding Spacefreighters Lounge with a Stylist Blogger award.  We're so proud! 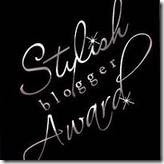 Ah, but just like Miss America, there are duties connected to this title.
First, we must tell you seven things about ourselves.  OK, we're game.  Here goes:﻿
1.  Laurie: I collect dragons, quotes and '57 Thunderbirds.  (No, not the actual cars--I wish!--just pictures and models.)
2.  Sharon:  I was awarded honorable mention for a short story contest in Cricket Magazine when I was 12.
3.  Donna:  I hold a third degree black belt in Isshinryu karate, a traditional Okinawan style, as well as black belt rank in the internal Chinese arts of tai chi, hsing i and ba gua. I have been studying karate for 18 years; internal arts for 13 years and teach both styles.
4.  Laurie: I live on a small ranch called the Rising Star.  When  people ask how it got it's name, I used to tell them it was named for Venus, which was rising over the mountains like a beacon when we first bought the land.  Truth be told, it's really named it after the diplomats' ship in the original Battlestar Galactica.  At that time in my life, I didn't want to out myself as a Sci-Fi fanatic.  Now I'm a proud, badge-toting SFR Brigader and I have no problem telling everyone (like you!) from whence came the name.

5.  Sharon:  I once placed second in a 24-hour mountain bike race (because there were only two women’s teams!)
6.  Donna:  I was a Peace Corps Volunteer in a small village in The Gambia, West Africa from 1976-78.  My husband and I provided admin support to other volunteers and fieldworkers in the Community Development department.
7.  Donna, Sharon and Laurie:  We all met for the first time at the 2009 RWA National Conference in Washington, DC.  Ah yes, it was a very good year.  :)
Now, we'll  pass along The Stylist Blogger Award to ten other bloggers and share the wealth.  :)  If you're here to accept a Stylish Blogger Award, please comment below.
Posted by L. A. Green at 7:59 PM