While I was revising some old titles amongst the books I'd written I got to thinking about which of my characters was my favourite. And then I wondered what other writers would have to say if asked the same question. So - since it was my idea - I'll go first and tell you about my favourite character. 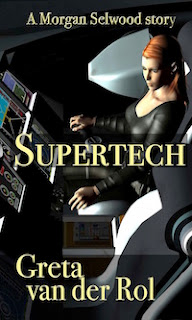 Why I love Morgan Selwood

Morgan is the hero-person in my (ahem) Morgan Selwood series. She came into being at a time when I'd written a couple of chapters of a then very new WIP for what became The Iron Admiral. I chucked the work at the wall (as you do) and muttered, "Who would want to read that rubbish?" I'd discarded my WIP and had to think of a new story.

Morgan nudged me. I knew my leading lady would be a computer nerd. I'd worked in the industry for many years, so it was 'write what you know'. So a cyborg? Around that time Terminator was the big thing, and I didn't want to go there. I hate dystopian stories. There's too much evil in the real world. But I could see a future with a Rise of the Machines. I stewed on that concept. What would come after, when the machines were defeated? If the machines were defeated? And that led me to Morgan Selwood. A cyborg, but a very, very human cyborg, actively controlled by the Powers that Be so she and her kind could never threaten humanity again.

I've written Morgan as tough and (of course) smart. But even within her Supertech group (that's what the cyborgs are called) she's different, something of a renegade. That tough exterior, complete with swearing, hides a very female interior. (I almost wrote soft!) Morgan is very much a woman and I thoroughly enjoyed writing her toughness, her weakness, and her iconoclastic sense of humour.
These few paragraphs from Morgan's Choice will give you some idea.

Morgan and her ship mate, accountant Jones, are on board an alien warship and have just been scrutinised - through a sealed window - by the ship's senior officers. Morgan, true to form, has impressed - but offended.


It seemed the performance was over. Daryabod Ravindra stood, the two lesser mortals followed suit and all three left the room. So far, so good. With a bit of luck they’d teach them the local language; always a good place to start.
"You’re not much good at body language, are you?" Jones said when the door had closed on the aliens.
She bristled. "What d’you mean by that?"
"Be careful what you do with your hands. It’s one of the things you learn in business. The wrong gesture on the wrong planet and you’ll offend somebody. Didn’t they teach you that at military school?"
"No, they didn’t. They taught me how to salute but I wasn’t much good at that, either. They take me as I come." And if they didn’t, too bad.
"Well… you’re not exactly a people person, are you? But that’s okay. Let me handle the people bit for you."
"The people bit, huh? So what are you expecting? That we’ll get invited to the officers’ mess for dinner?"
"No, of course not. But we’re going to have to try to fit in—"
"You’re getting ahead of yourself. You don’t know anything about these aliens or what they intend to do with us."
"Well, given they haven’t done anything horrible yet, I figure we might as well try to set up some sort of rapport with them."
She snorted. He must fancy himself as a diplomat. Idiot.
Jones frowned. "What are you expecting them to do?"
"I don’t know. But we’re still in quarantine. Better hope they don’t find any exotic bugs and decide to squash the threat." She ground the heel of her hand into the table top.
He swallowed. He obviously hadn’t even considered that option. "That isn’t funny."
"It wasn’t supposed to be."

Be sure to join us next week, when another author tells you all about their favourite character.