Technology Catches up with Outer Planets...Again

Writing a novel set in the 2040s--just a little over a couple of decades from now--has presented some ongoing challenges for me as a writer. Our current technology is changing and evolving so quickly, it's hard to envision what we'll really be capable of in twenty years.

Think back in time. What was technology like in 1996? Back then, 16MB of ram was cutting edge, Apple was a failing company, MP3 didn't exist, CD-RW was just announced and DVDs wouldn't be invented for a year or so. Monochrome computer monitors were pretty much the standard. Cell phones were called "bricks" though some had a nifty flip-phone design. A very early version of digital cameras existed, but they weren't affordable (and they definitely weren't integrated into cell phones). GPS had just become fully operational in 1995 and Google Maps wouldn't be on the scene for another nine years (launched February 8, 2005). Things that we take for granted today as part of our everyday lives were just beginning to evolve.

In order to create the world of the 2040s, I had to consider the leaps in technology we've had in that time span and launch my imagination an equal number of years into the future. But technology has frequently caught up with (and sometimes validated or invalidated) my world-building. 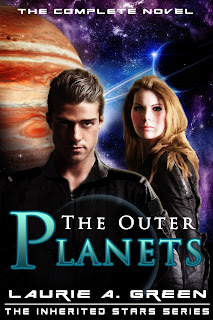 In The Outer Planets, the astronauts spend the first part of their voyage to Jupiter in stasis--what they also refer to not as cryosleep, but as hypersleep, suspended animation or S/A. It's hardly a new idea in science fiction (Aliens, 2010, Prometheus, Red Dwarf, etc.), and the reasons for taking this measure are pretty clearly explained in Chapter 2 of my novel:

Stasis. Suspended animation. S/A. Hypersleep. No matter what you called it, it was a necessary evil. Lissa took several deep breaths in an attempt to calm her jitters.

Humans did inefficient things like breathe, eat and drink. Hypersleep conserved massive amounts of air, food and water—precious commodities where they were going. Robot supply ships would arrive at intervals with fresh provisions once they were revived, but putting the crew into stasis for the year of travel both outbound and inbound made the five-year voyage possible.

Lissa fixed her attention on a middle-aged male being wheeled away in a sleeper, his body in a state of near-perfect suspension. His pale, lax expression reminded her of her father resting in his coffin. She clenched her jaw against a sudden surge of grief.

Not the time to be thinking those thoughts.

The current NASA planning only calls for a duration of two weeks, where my crew is put into S/A for about a year...in both directions.

It works for both the reasons stated above, and also plot-wise, because what reader needs to slog through a year of their journey before they actually get anywhere interesting?

NASA though is looking at utilizing cryosleep to get astronauts to Mars, not Jupiter, so the duration is estimated to be only six months each way, rather than the year from Earth to Jupiter and Saturn to Earth (yes, Saturn is hugely further away than Jupiter, but a gravity assist from Jupiter will give them a lot of added velocity, plus they have this nifty tech called Gravity Gain that amplifies the Sun's gravity and only works for inboard flights within our solar system).

But this is where things start to get really exciting. And troubling.

On another front, science is exploring the EmDrive--a "propellant-less propulsion system" that shouldn't work...but does--which could get us to Mars in about 70 days (give or take on the orbital positions of the two planets). Now combined with cryosleep, we might really have some range. If we can reach Mars in 70 days, pairing the cutting edge propulsion technology with hypersleep--er, cryosleep--could easily make exploration of the entire solar system a reality by getting a human crew there in a matter of months--much, much faster than is currently feasible.

And that opens up all sorts of possibilities for space exploration of our solar system ala The Expanse.

But it does raise some potential problems for this author. The Outer Planets has a particularly tricky timeline where certain events must happen at certain points, and if EmDrive capabilities do prove to be feasible, the faster transit time to Jupiter and Saturn would definitely render my next novel obsolete (along with many, many other science fiction stories by much more famous authors). Though I've frequently had to "spiff" the near future novel as new technological advances are unveiled, the EmDrive would change everything.

I'll be keeping a close eye on these two evolving technologies in the months (and years) to come.