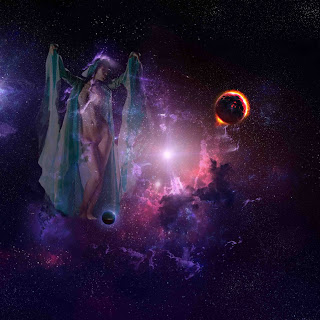 It's been a busy few months for me. I'm not long back from another dash around Australia, a fifteen thousand kilometer round trip. If you're interested in where I've been and what I saw, pop over to my blog and follow along. I took lots of pictures.

But now I'm home, the blogs are all written, and the urge to get back to the WIP is there just over my right shoulder. It's about twenty-five thousand words in, and I have ideas to take it forward. What's it about?

Well...
For centuries stories have been told about the mysterious Maidens. A distant open star cluster, it is the legendary home of the Gh'ria, the giant wizards of folklore.

When her archaeologist parents go missing somewhere in the vicinity of the Maidens, history professor Olivia Jhutta returns home to see if she can find out what happened to them. Her parents have left her a cryptic clue, which she shares with her grandmother, and with family friend Admiral Jackson Prentiss. When Prentiss is grounded after an accident, he decides to tag along with the two women to find out what happened to Olivia's parents.

But they're not the only ones interested in the Maidens. Anti-Confederacy Helicronians have found an ancient reference to a Gh'ria weapon. If they get there first, the Confederacy will be at war.

Here's a brief taste. Olivia is staying at Grandma's house, and she has just shown Grandma the tantalizing clue her parents left for her.


"Jak might be able to help." Grandma picked up her kaff and sipped.

"Who's Jak?"
"You met him last night. At the reception."
Jak? Olivia went through the memory in her implant, bringing up faces and names. "No."
"Jackson Prentiss. The admiral. His grandmother's a dear, dear friend." The old lady chuckled. "I haven't seen him for quite a few years, but young Jak was a nice lad, handsome and clever. I remember telling Claire that he'd break a few hearts."
"Him?" Olivia remembered all right. The tall, handsome man with the patronizing manner. The look on her face must have given her away. Grandma's eyes twinkled. "You've met him once before. You don't remember, do you?"
Met him? She searched her memory, certain she would have remembered someone like him. But Grandma wouldn't lie. "When?"
"When we visited Claire's house. You would have been ten, I think."
Grandma had taken her off planet to visit her wealthy friends. Olivia remembered the museums and the beautiful gardens. And Aunt Claire's grandson, a few years older than her. He'd come to one of the gardens with them, hadn't been at all happy about it, and made sure everyone knew. He'd barely said hello, looking down his nose at her as if she was in the way. "I remember. He wasn't very nice. Quite rude to his grandmother, really, now I come to think about it. Besides, I don't like uniforms. History is full of them, usually when it talks about killing."
"You don't need a uniform to do that," Grandma observed. "Look at what the Helicronians did in the name of their God."
Slaughtered anyone who wouldn't convert to the One True Faith. True. Olivia covered her thoughts with some more tea.
"What happened last night? He said he was very taken with you."
Olivia nearly dropped the cup. "You've spoken to him?"
"Yes, dear. He called last night, from his ship. Probably just after he returned from the reception. He mentioned he'd met you and how delightful you are."
This was starting to sound ominous. "And?"
"He's coming to visit." The old lady glanced up at the old fashioned chrono. "He shouldn't be long, actually. He might be able to help you with this puzzle your parents have left you."

So Olivia and Jak haven't exactly started off on the right foot .

In other news, I've caught up on Star Wars Rebels Season 3, mainly to see what they've done with Grand Admiral Thrawn. I'm impressed. The artists have done an excellent job at portraying him as an articulate, intelligent individual, a direct contrast to the bully-boy Imperial captain.

And on another topic, I occasionally look over my husband's shoulder when he's reading. He tends to select freebies from Smashwords. A lot of it is rubbish, but if he finds something to his taste, he'll buy all the other books in the series. The book he was reading offended me. The formatting was appaliing with sentence after sentence of run-on words, like this. Hadn't beenatall happy about it, andmadesure everyone knew. It seems this book had been deliberately released as a beta, to get feedback. I think that's an insult to readers, and just reinforces the notion that indie books are rubbish.

If you're going to do this writing thing then I firmly believe you owe it to the world to do your job properly, and at least publish something that looks professional. /rant.

And here's a picture from my travels.

Email ThisBlogThis!Share to TwitterShare to FacebookShare to Pinterest
Labels: On Writing, WIP