I actually went to the cinema 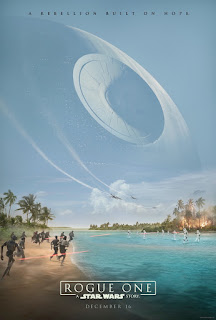 Yes, folks, I went to the cinema to see Rogue One. I have avoided going to a cinema for years because I hate crowds, yahoos, and popcorn. But I was persuaded it would not be crowded, so I inveigled my wonderful husband to come with me. As an aside, I suppose these days the block buster movies make their money from sales of toys and what have you, and of course the DVDs, so the movie theaters are not quite as popular. There were about a dozen people in the theater - although it was the 11:30am 3D showing, specifically picked to avoid crowds. I was very disappointed in the 3D effects - but I expect they will be better when I watch them at home with glasses paired with a TV. If you're thinking of spending the extra for 3D tickets, my advice is don't bother.

Well - on to the movie. First I'll tell you that I have read Catalyst, James Luceno's Rogue One prequel novel. I'll post the review for that next week. It did give me, I think, a bit of background knowledge about Galen Erso and his daughter, Jyn, and Director Krennic, and that provided me with extra depth for those characters, and for the Death Star project itself.

The story starts off with Jyn as a child, being separated from her parents, then moves on to her as a young adult. As a result the action is a bit fragmented to begin with, jumping from place to place, and time. That didn't bother me so much (maybe because I'd read Catalyst) but my husband found it a bit difficult. After that, though, we settled into an action-packed war movie. Because that's what it is. A gritty, brutal, in your face war movie. It pulls no punches.

The most compelling aspect of the story - what I took away - was that a rebellion is made of many different people with very different causes. It's never homogeneous, and it isn't necessarily nice. There's courage and sacrifice and varying degrees of commitment. Similarly, Imperial agents have their own agendas. The animosity between Director Krennic (he of the white cloak) and Grand Moff Tarkin was well done, and I was delighted to see everybody's favorite villain, Darth Vader, make his appearance as more than just a token. Unlike Pippa, I liked that there were no Jedi in this film (Darth, of course, is Sith, not Jedi). These were ordinary people with their own reasons for fighting against the Empire. It made the rebellion much more... understandable. Certainly watching the Death Star do its stuff gave so much more depth and gravitas for Star Wars: A New Hope.


The special effects are, as you'd expect, fantastic, and the movement from this film into A New Hope is pretty much seamless. You might even recognise some of the fighter pilots who fight in both battles.

The movie has a number of side references to some of the other movies which someone like me would notice and someone like my husband would not. Most of them could have hit the cutting room floor without making much difference. In fact, I'd be rather inclined to believe the director was asked to add them to make the movie more part of the Star Wars family. The musical score was mostly new - but with overtones of the old which worked very well for me.

Do I think it was better than The Empire Strikes Back? No. But back then I was younger and more easily impressed. Back then Taun Tauns were done with stop-motion photography, the Imperial Fleet was a bunch of models on strings,  and Yoda was a puppet - but I didn't notice. And I recall being so sucked into the story that I didn't notice the bit about being able to travel between systems without a working hyperdrive until somebody else pointed it out to me. I saw the movie 4 times in the first week of its release, and I've lost count of how many times since then, in picture theaters , on video tape, and on CD and DVD. In contrast, although I enjoyed Rogue One, I wasn't totally engaged. Maybe that just means I'm older and more cynical.

I'll certainly watch Rogue One again. It is much better than the prequels (SW1-3) and light years ahead of The Force Awakens, which I felt was a wonderful opportunity wasted.On the list of Star Wars movies so far, I'd put it at #2, after Empire.

Email ThisBlogThis!Share to TwitterShare to FacebookShare to Pinterest
Labels: Rogue One, Star Wars, The Empire Strikes Back