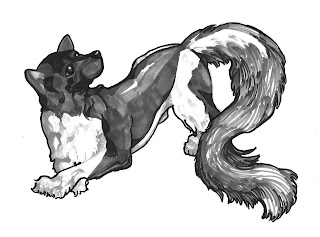 Introductions are on the agenda today. I'd like you to meet Luna, the new pet-heroine from my upcoming release. This wonderful sketch was created by artist Nyssa Juneau and it beautifully captures the essence of this little, four-legged dynamo.

For those who've read StarDog, a story in the first Pets in Space collection and part of my Inherited Stars series, I have a surprise for you.

In the original story--StarDog--where Katrina was the starring pet, this girl was known as StarPup. In fact, Luna is a genetic copy of Katrina. She'll soon have her own adventure that will be every bit as exciting and high stakes as the first.

So...is Luna a clone of Katrina? Not exactly. A genetic copy is different from a clone in that both animals were bio-engineered using the same genetic blueprint, rather than one animal being a genetic copy of the original "natural" animal. StarDogs don't exist in nature. To paraphrase one of the scientists from Jurassic World: StarDogs are designed, not bred.

Luna's owner, Ketsia, explains the purpose of StarDogs to her curious escort, Captain Jagger, in this way:

“Where do StarDogs hail from?” he asked. “Never encountered one before.”

Despite his face being half-hidden by the visor, he seemed genuinely interested. “They hail from a talented bio-engineer.” Ketsia pressed her knuckles to the base of her helmet and eased it back to a more comfortable position. “They’re recombinant canine, weasel, mongoose, and feline DNA, created to serve as starship mascots and vermin exterminators.” Giving him a sly smile, the one expression visible to him below her faceshield, she added, “And as Network spies on Alliance ships, if the rumors are true.”

“Huh.” He shifted in his seat. “And how does an ambassador’s daughter come by such an animal?”

She affectionately stroked Luna’s soft fur. “She was a gift.”

“From a man friend?”

Ketsia sniffed. What, did he think men regularly showered her with exotic gifts?

﻿Like clones, even when genetically identical, StarDogs can have different markings because of environmental factors during incubation and development, so Luna doesn't look exactly like Katrina, who was mainly black and tan. She has loud splashes of white in her coat.


Like Katrina, this little girl is also highly intelligent and has a few special skills she'll demonstrate in my upcoming release Courting Disaster: StarDog 2 which will be part of the exciting new Embrace the Romance: Pets in Space 2 collection to be released October 10, 2017.

What happened after Operation Reset and the fall of the Ithian Alliance? Two of the characters from Inherit the Stars are about to find out when they set a collision course with disaster.

Captain Navene Jagger, commander of a mysterious, derelict starship, must pretend to be married to Ketsia Tayah, the woman he is escorting through a dangerous sector of space. As he deals with threats that might get them both killed, he's unaware of the talents of the StarDog at her side.

More about Embracing the Romance: Pets in Space 2

The pets are back! Embrace the Romance: Pets in Space 2, featuring twelve of today’s leading SFR authors brings you a dozen original stories written just for you! Join in the fun from the Dragon Lords of Valdier to a trip aboard Award-winning author, Veronica Scott’s Nebula Zephyr to journeying back to Luda where Grim is King for stories that will take you out of this world! 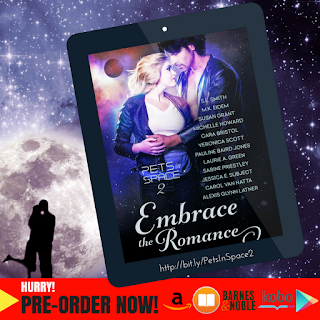 Can't wait? Not to worry. You can pre-order now at any of these booksellers:

The authors of the collection are also very proud to announce that 10% of the first month's profits will go to Hero Dogs. Hero Dogs raises and trains service dogs and places them free of charge with US veterans to improve quality of life and restore independence. You can meet the Hero Dogs in training and read more about this wonderful program on the Hero Dogs site.

Join us on Social Media!

Can't wait for October? You're invited to join the authors for chat and news here:

We have some fun upcoming activities, events and giveaways you won't want to miss!

Here's a special preorder preview of all the Pets in Space stars!


Want to say "hello" to Luna? Have a special pet of your own you want to tell us about? Please comment below.