All that matters is the story (in the first draft, anyway) 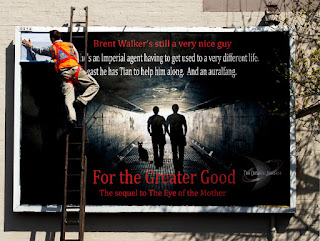 I'm in the process of responding to my editor's comments on my latest WIP, and re-learned a lesson I had clearly forgotten. And that is, when it comes down to it all that matters is the story.

I quite often read blog articles about writing. After all, I'm a writer. When I worked in IT I read articles about IT. It's important to keep up with what's happening, and there is always room for improvement.  But there's an important difference. In IT, technology changes rapidly. If you don't keep on top of the wave, it moves on without you. That's not really true of writing. Sure, there are some changes in expectation to take into account. One example is the need for description. In the book Moby Dick apparently Herman Melville went into tedious detail describing a whale – because most readers would not have seen one. That's no longer an issue these days. If you haven't seen a real one, there are plenty of pictures, so too much explanation is tedious and boring

There are changes in reader expectations and taste that may merit consideration. I've heard it said that The Lord of the Rings would not have been published if it had been offered to a publishing house today. Too long, too rambling (Tom Bombadil and the Old Forest) and a bit archaic in style. Readers generally are more accepting of graphic sex. But really, all of that is a nonsense. It's a matter of taste. Many people still don't appreciate erotic stories, or even those with coarse language or blasphemy. But many readers love Charles Dickens, even more love LOTR and even more loved Fifty Shades of Grey.

Most writing advice on blogs is about 'how to do it better'. Many of them repeat the dogma everyone else has offered about self-editing, words to watch, avoid adjectives and adverbs etc etc. One blog I read recently was about writing in what's known as 'deep third' – you describe what your point of view character sees and feels so the reader can be involved in the experience. It's the difference between saying something like an example from this blog. There are plenty of others - just google 'deep POV'.

Out of Deep POV
'At last the tremors subsided and the earth stilled. Maggie wondered how bad the earthquake had been. She looked around and saw the deep black gashes in the ground where the pavement of the road had cracked. She knew that it must have been at least a 7.0.'

In Deep POV
'At last the tremors subsided and the earth stilled. How bad had this one been? All around, wide gashes cut into the pavement as though it were soft as flesh. Maggie shivered despite the heat. A 7.0 at least, perhaps even higher.'

The basic idea is to take out the 'filter' words (wondered, looked, knew) and show what Maggie feels to offer description of what's happened.

But you see, it isn't as easy as it looks. I do try to write in this way, but unless you're careful, you can end up confusing your reader (or yourself). In a first draft the most important task is to get the story down. There's time to add the deep POV detail in the second or third draft. And that is what I didn't do. In my draft I spent too much time on method and not enough time on story.Confusing your editor isn't a good look. Sorry, Di.

Now I'm paying the price, fixing up the inevitable plot holes. When I sent it to my editor, I knew in my heart it wasn't really finished. Trust your heart, writers. It KNOWS stuff.

And now for some pictures.