It has been a while since I've written a book. In the last six months or so I've done a fair amount of traveling and when I travel, I record the journey in blogs on my own website. They take a fair amount of work, because I research what I write, giving links to the history of places, and links to confirm I'm not making things up. I also incorporate my photographs (and some of Peter's, when he's taken pics of things I never thought worthy of pointing my camera at them).

But the thing about writing is that it's like an addiction. I won't say I find writing easy - I don't. Picking the right words, recomposing a bland sentence, getting the tone right. The hardest part, though, is coming up with the story. That's the thing that makes people continue to read after lights out, using a torch in their blanket fort. I used to do that. You don't do it for blah books that you can pick up tomorrow.

The last book I wrote was For the Greater Good. I've promised to write a sequel, and I will. But I figured it would be nice to have a headstart. I had two unfinished docs where I'd run out of steam, and thought maybe I could refurbish one of them for Puss, Tian, and Brent. I'd gone a long way with making changes before I realized I was enjoying the story (from three years ago) just the way it was. So, I'm sorry Puss, but you'll have to wait. I'm writing a sequel to Kuralon Rescue.

The book will be stand-alone, but I won't deny it will help if readers have read Kuralon Rescue. Three of the four main characters are introduced in that book. It's a kind of 'origin' novel, like the movie Wonder Woman showed how she became a super hero. I'd always intended to write more than one book about Morgan's Misfits (my three main characters) but my ideas have shifted since I wrote that first book. Still, essentially the three main characters are misfits within the strictly structured social system of the Morgan Selwood universe. They're not supposed to get along, but they do. And while they're doing that they actually demonstrate the strength of their rigid social system - because each of them has different skill sets which make up a greater whole. It's only when the rules become cages that the system falls apart.

Anyway, that's what I'm writing. For now, you can catch up with the background - or the origin story, if you like - by reading a bit from Kuralon Rescue. 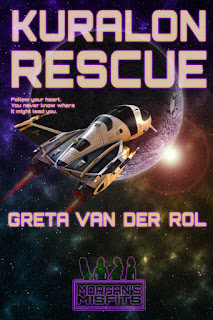 Jirra’s on the run, Siena’s rescuing her lover, Toreni wants Master Chef status and Chet wants her reputation back. Four women, four goals, and one very small ship. Add a fleet request to free a rebel, the promise of little to no help and a caste-defined society simmering with discontent on the edge of explosion.

Now, on their own, they’re staging an escape from a backwater prison planet and navigating the murky terrain of dreams forbidden by the rigid caste system underpinning their culture.

Success demands more than team work. They’ll have to jettison their own prejudices and forge relationships free of the rules and caste lines.


Here's a snippet where the four women in the adventure first get together. They've thwarted an attempt to steal their ship, docked at a space port.


"So how did you get involved with us?" Jirra asked. "Was Toreni involved?"
"I met Chet on the way down the spoke," Toreni said from the galley. "I asked her where she was going, and she said she was following our little friends. So I asked why and we worked out we were headed for the same place. Then we had to find a way to get in without warning them, because the bay door locks behind people."
"How did you?" Jirra asked.
Chet cleared her throat. "Shall we say I collected a few souvenirs from my police days? Like an all-purpose key to the bay doors?"
Delectable smells drifted out of the galley. Jirra's stomach rumbled. "So how did you realize Gundar was going to steal our ship?"
"I've come across Rison and his fine friend before. Rison's a dodgy pilot who hires out, no questions asked. They were in a pub last evening, a place I go to now and then." Chet rubbed her mouth. "They seemed to be very pleased with themselves, so I nursed my drink and eavesdropped." She grinned. "I have some little helpers for that sort of thing."
"Like what?" Siena asked.
"Tiny robots. They look like insects. You fly them to land somewhere close to the target. In this case, on the edge of their table." Chet pointed at her ear. "I wear an ear piece."
"Anyway, Rison mentioned Gundar and a job, and I got interested. I heard enough to know it was an APSS-50, and much gloating over a couple of additional assets. The hit was going down tomorrow some time. I still know a few people. I found out where any APSS-50s were in dock, and where they were. I figured Gundar would be doing engineering on the ship, he always does the work himself when it's a grab for a ship. That way, his regular workers don't know anything about his illegal activities, and he can still run a legitimate business. I waited for him in the food hall, then followed him down the spoke to the bay. Once I knew which ship I went back to the access doors to wait for Rison and his mate. Toreni must have caught the travelator just after me, because she caught up with me."
"Like I said before, I've known Chet for a couple of years," Toreni stood over the stove, stirring. "I'd heard what happened to her, and the talk was she'd been set up. I wondered where she was going, so I caught up with her. I've come across Rison, too. And his buddy, Grelf. Grelf's a real piece of work. Spends a lot of time in the brothels and the girls have told me he's kinky, and he's rough."
Jirra shuddered again. Grelf's words rang in her ears. 'We can have a little taste while we're underway.'
"Well, I have to say I'm delighted you followed the skike." Siena scowled. "But I'm sorry I lost a thousand credits to him."
"We kept his toolkit," Jirra said. "I haven't had time to look in it yet, but from what I saw when he was working on the engines, there's some pretty classy gear there."
Siena looked down her nose. "Is it worth a thousand credits?"
Jirra grinned. "Probably not. But he did do the service as required. My guess is he's a good engineer."
"He is." Chet turned to Toreni. "That smells wonderful. I didn't know you could cook."
Toreni cocked an eyebrow. "How 'bout that? It'll be another half hour."
"Let's celebrate with a glass of wine." Siena jumped out of her seat. "Everyone happy with red?"
"I'll pass," Chet said. "But I'm happy to drink a glass of water."
Siena turned to look at her. "Oh, come on. One glass. We have beer and some brandy if you'd prefer."
Chet shook her head.
Siena shrugged in that 'suit yourself' way, and poured three glasses of deep red wine. She handed one to Jirra, before taking one herself. "Toreni?"
"Can you bring it here? I can't leave this sauce."
Siena pursed her lips.
Jirra picked up the third glass and set it on a bench close enough to Toreni for her to reach. Stirring the steaming pot with one hand, Toreni lifted the glass and sniffed. "Nice." She sipped a mouthful, holding the wine in her mouth, her cheeks ballooning in and out. "Good choice, Siena. You can taste the fruit, and it has a lovely finish."
Jirra concentrated on her glass while she worked hard at containing her amusement. Toreni was full of surprises.

You can buy Kuralon Rescue at iBooks Amazon Kobo  B&N

I'll be sure to let you know how I'm getting on with the sequel. I might even share a few bits here and there.

And here's a picture of a flying osprey. Yes, I took it. 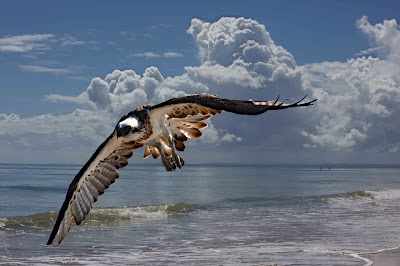