First Man - it's not really about the moon landing 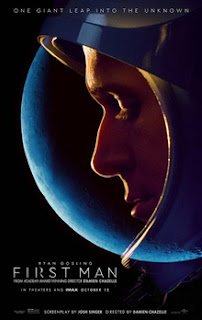 It seems these days when it comes to movies I either watch SF, documentaries, or historicals. This time it was kind of a combination of all three. Not exactly SF. Science Fact. I'd bought the DVD of First Man, a look at the life and times of Neil Armstrong as it fitted into the manned space program.

Of course, the Gemini and Apollo space programs were vital arcs in the movie – but it's not about the moon landing, it's about the man. The director tries to get inside him, see what made him tick. The loss of his daughter, Karen, to cancer at the age of three is shown as a vital part of his psyche. His wife, Janet, played an anchor role in keeping the family – Neil and their two young sons – together.

Some people thought this was an edge of your seat movie experience. It wasn't for me and I'll even admit to saying to my husband at one stage that I was bored. Kind of 'let's stop with the happy families and get in some more space time'. But I suspect that was me being churlish.

I think Neil Armstrong would have been a difficult man to get to know, let alone like. He is portrayed as very much a loner, not prepared to discuss his feelings with anybody. He was cool in a crisis, able to improvise to get results and from that point of view, after his heroics on Gemini 8, he was absolutely the best man for the job of piloting the lander in the Apollo 11 mission.

The whole movie also made it clear the extent to which NASA was driving the president's promise (we will land a man on the moon in this decade) by the seat of their pants, always one step behind the Russians. As Janet says (and I'm paraphrasing) "you pretend you know what you're doing but you're like a bunch of kids playing with a balsa wood plane and an elastic band". And she was right. Three astronauts died on the launch pad in Apollo 1. Others died in plane crashes. Death was always just one mistake away. One of the most powerful scenes for me is when Neil has been selected as command pilot for Apollo 11. Janet MAKES him go and talk to his two sons, makes him tell them that he might not come home.

That's how it was for all the astronauts' families.

The mon landing itself takes up the last few minutes of the movie. Basically it's not what the movie is about.

Here's a bit of background from somebody who's old enough to remember the space race and what it meant to the Western World.

I was 18 when Apollo 11 left for the moon, in my second year of a BA degree in history. Like many of my colleagues, I stayed home to watch history being made. The whole western world quivered with excitement. President Kennedy’s goal of a man on the moon within a decade was about to be fulfilled. We’d seen the dark side of the moon from Apollo 10 (and the Russian probes, but we won’t go there). And now it was all about to happen. You’ve all seen the pictures as the three men in their bulky suits took their last walk to the tiny, tiny module on the top of the Saturn V rocket. So did we, on CRT TVs.

Now was the day, morning in Perth, Australia, and I sat on the edge of my seat in the lounge room, eyes glued on the TV while on the other side of Australia the signals came in to Parkes. We never knew, of course, that Armstrong had taken over landing the module himself, looking for a flat piece of Moon. Never knew he had 30 seconds of fuel left. That came out later. I peered at grainy black-and-white footage. First, the lander’s leg resolved itself and then you could just make out the ladder. Then a boot appeared and Armstrong eased his body down onto an unknown surface and uttered his famous words, ‘that’s one small step for man, one giant leap for mankind’. Even then I wondered how long he’d been rehearsing; and who had written it for him. Here’s the footage

The next few days went by in a blur of extra-terrestrial shots of footprints on an ancient landscape, attempts to raise a US flag fitted with an arm because there was no wind, the famous photo of the moon reflected in a visor. Buzz Aldrin and Neil Armstrong cavorted like a couple of kids in the weak gravity, while Collins stayed up there in the capsule. I held my breath on that final day when they blasted off to dock with the capsule and cheered when they splashed down in the Pacific.

It was years later before we all began to realise how dangerous the whole thing had been. These men were pawns in a race with the USSR – which had its own pawns, of course. NASA took a lot of risks and I’ll bet Mission Control had its fingers crossed many a time. What happened on Apollo 13 is a case in point. If you don’t know, go see the excellent movie of the same name, starring Tom Hanks. So the USA won the race. But interest waned quickly; the last manned flight, Apollo 17, was in 1972 and we don’t look like going back any time soon.

I suspect when 'we' do, the astronauts will be Chinese.