A couple of big things happened on the literary front this week. And though I usually just keep my head down and write, these events were specific to my two chosen genres—romance and science fiction—so I paid attention.

On Tuesday the World Science Fiction Society announced its nominations for this year’s annual Hugo Awards for the best works in science fiction and fantasy, Astounding Award for Best New Writer, and Lodestar Award for Best Young Adult Book. Unique among literary awards, these SF honors are chosen from among the nominees by the members of the World SF Convention (WorldCon) every year. That means not only authors, editors and publishers get a say in who wins the awards, but also fans of the genre. Due to the limitations of the COVID pandemic, the 79th Annual World Science Fiction Convention, DisConIII, will be virtual, streaming from Washington, D.C.

In the past democratic ideal has sometimes worked more like mob rule in science fiction. Just a few years ago, the genre was turned upside down at the time of the Hugo nominations by the very idea that a woman—or a person of color—might win the top award. The World SF Society, which administers the award, and the Science Fiction Writers Association were roiled by a very open, very ugly controversy pitting the old guard of white, cishet males against a younger cohort of diverse authors—female, POC, LBGTQ+, the disabled, and their allies.

Though that process was painful, it did eventually break through the barriers to progress SF had built since the halcyon days of the New Age. And this year’s list of nominees is almost all women, people of color and representative of other diverse backgrounds. Amazingly, it looks just like any group of authors you might meet!

The Romance Writers of America® went through a similarly wrenching self-examination over the last two years, recognizing that the organization had A LOT of work to do in the area of diversity, equity and inclusion. Year after year, our own contest to honor excellence in romance, the RITA®, ended up with virtually NO nominees of color, LBGTQ+ authors or any other authors representative of marginalized communities. Worse, the nominated books themselves were seldom representative of the world at large, with almost every one full of white, hetero couples unchallenged by any disability. 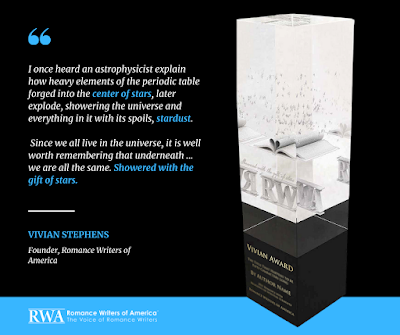 Given the RITA®’s many problems, a reorganized RWA® decided to retire the contest and institute a brand-new contest with more objective judging standards. This is the first year of the Vivian® Contest for excellence in romance writing, and the finalists were just announced this week. It may be too early to tell whether the hoped-for improvements can truly be found in this year’s nominees. There are a few more people of color among the Contemporary Romance author nominees, and from the book descriptions that translates directly into more POC in the heroes and heroines that populate their nominated books. (One of the nominees is an old friend from my days in the Virginia chapter of RWA, Tracey Livesay. Congratulations, Tracey!) There is at least one LBGTQ+ author (congratulations,Laquette!), though there may be others I don’t know about. The Historical Romance—Long category remains the stronghold of veteran, best-selling authors, but inroads have been made by a new generation in other categories. Congratulations, in particular, to our Golden Heart sister Valerie Bowman for her nomination in the Historical Romance—Mid category.

I regret to say the Speculative Romance category remains dominated by paranormal romance, though we did have a nomination in the Best First Published Book category (Choosing Theo: The Clecanian Series (Book One) by Victoria Aveline). One big reason for that is probably that SFR authors remain gun-shy about submitting to RWA contests. I really hope we get over that.

On the other hand, I was a judge this year, and I have to say I wasn’t overly impressed with the SFR books I was given to judge. That wasn’t unusual. I’m a harsh, but fair, judge. Not many of the books I read in any category made the grade. The great thing about the Vivian® Contest is that there is an objective scoring system in place. Judges can’t just say, “Not a romance,” and get away with it anymore.

This is Vivian®’s first year, and there are bound to be criticisms. I thought there were a few tweaks that could have improved the score sheet, myself. Still, I hope to have a book to enter next year, and I encourage more of you to enter, too.