It should have had a romance arc 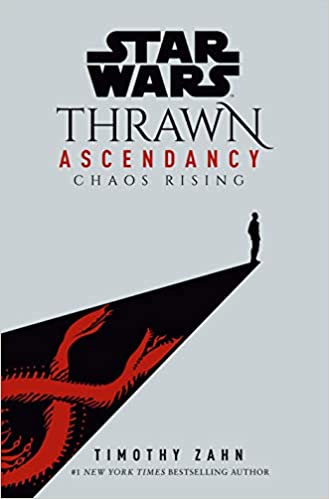 Grand Admiral Thrawn is one of my favourite Star Wars characters. Timothy Zahn created him in the 1990's to fill the hole left when the last of the original Star Wars movie trilogy, Return of the Jedi, faded from the screen. The three books – Heir to the Empire, Dark Force Rising and The Last Command – follow on from one to the next, as Thrawn's Imperial forces advance on Republic planets.

Thrawn is a warlord who effectively takes over from the deceased Darth Vader and the Emperor. But he's a very different 'villain' if that's what you want to call him. As a military leader he is unsurpassed - cunning, innovative, and resourceful. Thrawn is an art connoisseur, able to assess an alien adversary's mental weaknesses through their art. This is a nice idea which certainly sets him apart. As is so often the case with Star Wars, one must avoid asking too many questions, and go along for the ride. However he does it, Thrawn wins again and again, devising brilliant tactics to achieve his aims.

I certainly wasn't the only fan. Thrawn became a cult figure who appeared in a few other Zahn novels. But since he wasn't created by George Lucas et al, it seemed Disney would relegate him to the 'legend' stream, as opposed to the 'canon' stream of Star Wars stories. Fortunately, the new owners had the sense to elevate Thrawn to canon status and he's used in the later years of the animated series, Star Wars Rebels.

Since then, Thrawn has achieved a starring role in a series of books that examine how he became a Grand Admiral in Palpatine's Imperial Navy and his relationship with Darth Vader. They were fun books, with some attempts to let us into what was going through Thrawn's mind by showing his point of view – something Zahn had not done before. That was interesting. As Thrawn would say. 😊

Carrying on from there, Zahn has gone back in time. I've just finished reading the latest Thrawn book, Thrawn Ascendancy: Chaos Rising. This is the first of a new Thrawn trilogy about Thrawn in his early days in the Chiss Ascendancy before he went to join the Empire. This time, we don't get Thrawn's point of view but we're given a glimpse of his early days as a cadet through to senior officer via his relationship with a number of other characters who are used to illustrate Thrawn. Some love him, some hate him. Some support him, some plot to get rid of him.

And here is where I feel Zahn has missed an opportunity that I, and a number of fellow authors, would have grabbed with both hands. This book absolutely begged for, at the very least, a romance arc.

We first meet Thalias as a thirteen-year-old girl on board the ship taking Thrawn to cadet training, so he would be eighteen, nineteen. She's a navigator, somebody born with skills to guide space ships through space. But it's an ability that only shows up in very young girls – and fades in their early teens. Thalias knows she's finished as a sky-walker (that's what they're called). She encounters Cadet Thrawn in a corridor and he comforts the child who has just discovered her career is over. She never forgets and, much later, finagles her way onto Thrawn's ship. He remembers her, of course, and she's present at all his amazing battles from then on. But more than that, he takes her along on some clandestine missions – just him and her. And there are these 'fade to black' scenes. No hanky-panky, of course. But they stay for several days hidden away in close quarters, waiting to be picked up. What happened in that time is never mentioned.

Needless to say, these books are written for blokes so any hint of 'romance' would be met with outrage, so even if Zahn could write that stuff (and I suspect he can't) he would have ended up alienating the boys. There's not a hint of words like 'love' or 'kiss' or even holding hands and the fluttering of hearts. Even so, the Chiss have wives and make babies, so it's not that they're so very alien. In fact, the only apparent differences between Humans and Chiss is Chiss have red eyes and blue skin. There's more than a hint that the Chiss originated as a Human outpost, cut off during massive Galactic upheavals. So, surely there has to be some romance out there. Surely. But as it is, we'll have to use our imaginations.

Or you can go and take a look at the fan-fic that soon blossomed after the original Thrawn trilogy appeared. Not much imagination is necessary in that space.

It's a dense book, with six or seven POV characters and two different time lines – one in the present and the other in the past. We learn more about the Chiss culture, with the added complication that the Chiss characters change their names for various reasons. Apart from that, like all Thrawn novels, the book simply showcases Thrawn's apparent brilliance in working out his enemies and coming up with amazing strategies to win battles.

Worth a read if you're a Star Wars fan or if you like clever military sci-fi.