Last weeks episode ended with an angry Addy pelting an injured Max with apples. He asked for it, and she delivered. I enjoyed writing the juxtaposition of her hot, fiery anger at being trapped like an animal on this planet, and his cold, bitter acceptance of the beast he'd become.

As Max asked, how long could fire last in a world made of ice? 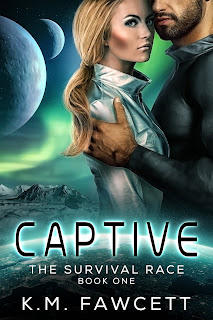 “Addy?” Duncan called when she entered his house. “What the devil happened to ye, lass?” He retrieved his cloak from the opposite wall and wrapped her wet body. “Ye’re shivering. Have ye been out there all night?”

“Come.” He walked her to the sofa. “Sit ye down, and I’ll get the furnace. Then ye can explain.”

He moved the eating table in front of her and then placed the die-sized cube on it, and it began to glow red.

She wasn’t sure how long she stared at it, but it must have been a while since three cups of tea now steamed on the table in front of her. Tess stood at her side holding a towel and a change of clothes. Duncan left to give Addy privacy, and, in a daze, she dressed.

“Now then,” Duncan said when he returned. “Have ye no sense to come in from the rain?”

“Da. Can’t you see she’s been through something?” Tess took Addy’s hand in hers and stroked it tenderly. “Do you want to talk about what happened?” Her face wrinkled with concern. It was then she noticed Tess wore a bathrobe. Her hair was disheveled from sleep. Duncan must have woken her up.

Guilt churned in her gut. No one should lose sleep over her. She always took care of herself. Even as a little girl, she’d learned to become independent, hoping that would ease her mother’s burden so Mom wouldn’t be depressed all of the time. “I’m sorry. I didn’t mean to worry everyone. I couldn’t sleep, so I went to the orchard to pick apples. Then I walked awhile.”

“Mmph. Perhaps next time, ye should leave a note when ye go wandering in the midst of a stormy night.” Duncan punctuated the last word with a head nod as if to say, That’s that. He moved around the room then came back. “Where are the apples?”

“Uh, in the orchard. I sort of pegged them at Max.”

Duncan’s words exposed her foolishness. “He deserves worse for what he did to me in the breeding box. I should’ve beaten him with a stick.”

Tess’s arms encircled her. She hadn’t expected the gesture but took comfort in her friend’s embrace and the warmth of her body.

“Aye. I’m sorry he wasna gentle with ye, lass. But are ye not aware of the breeding box’s purpose? Are ye going to attack every gladiator that yer paired with?”

“Really, Da. That’s how you choose to console her?”

“What? It’s high time she stopped moping around here and accepted her new life.”

Tess glowered at Duncan, who sipped his tea in his wingback chair. She returned her attention to Addy. “I’m sorry. I don’t know what’s gotten into him.”

“Don’t worry. I’m used to it. It actually sounded like something my mother would’ve said.” She met Duncan’s gaze. “Here’s the problem. I don’t accept this life. And I never will. I am not a broodmare. And I am not staying here.”

“I mean I’m getting out of here if it kills me.”

“The hell I can’t. Someone did. Tell me how they did it.”

Tess’s eyes popped open. She jerked her attention to her father.

“I dinna know anything about it.” Duncan got out of his chair and paced back and forth across the tiny house. Tess kept her eyes on her father but didn’t move, not even to put her teacup down. Was she holding her breath?

“I know you know about it, Duncan. You know everything.”

He strode to the kitchen and poured a whiskey.

“Dawn’s a bit early for drinking, isn’t it?”

He left his glass untouched on the sideboard, returned to his chair, and picked the lint from an armrest. Rain pitter-pattered on the observation wall.

“Whether you tell me or not, I promise you I will escape.”

“But where would ye go?”

“She could go to the equator.”

“It’s not like it’s a big secret. She’s going to find out sooner or later.”

Addy pushed herself to the edge of the couch. “What’s at the equator?”

His audible exhale sounded more dramatic than was necessary, like it pained him greatly to tell her whatever he was about to say. “A clan. They live in a place uninhabited by Hyboreans.”

“How come the Hyboreans aren’t there?”

“A refuge? You mean the Hyboreans let them live in peace?”

“Aye, that’s my understanding, as long as ye’re within the borders. If ye’re not, ye’re fair game for the poachers. They hunt, capture, and sell humans on the black market, ye ken.”

“Sell them for what?”

“No. The survival race is legitimate. Poachers sell humans for illegal sport.”

“What kind of illegal sport?”

Addy sipped her mint tea, swallowing it along with this new information. How much of the truth did Duncan tell? What else was he holding back? “What difference is there between poachers and your precious Ferly Mor? They both steal people and force them to be pets, or worse. Escaping to the equator would at least give me a chance to live free.”

“Perhaps. If ye can make it. It’s a harsh life out there. Scrounging for food. Always watching yer back for poachers, not to mention wild creatures. Stay with Ferly Mor, lassie. Ye’ll be well cared for here.”

“Hah! Abduction, slavery, and rape aren’t synonymous with well cared for. Ferly Mor stole my freedom, and I will never forgive him for that.”

Duncan visibly swallowed then turned to pick lint from the other armrest.

“Tell me what?” She looked from Duncan to Tess then back to Duncan.

Tess touched her arm and in a soft voice said, “Addy, Ferly Mor didn’t take you.”

Strands of red hair swayed around Tess’s face as she shook her head no.

“Then who abducted me?”

Duncan faced Addy and captured her gaze. “I did.”

What?!? Duncan stole Addy from Earth? How did that happen? Find out more in Chapter 15 next week or read the full story now at your favorite retailers for only $2.99.

Romance with a rebel heart