Up, Up and Away - NASA's Moon Launch

Buried by a lot of other headlines last week was NASA's successful Orion Moon launch on November 16th.

NASA has now set a goal of sending a crewed mission back to the Moon, and continuing the work that it abandoned in 1972.

As the rocket hit the ignition mark and lifted gracefully off the launchpad, the NASA spokesman said:

"We rise together, back to the Moon and beyond!"

Artemis 1 is a test flight for the future Moon mission. The Orion spacecraft module will disconnect from the rocket when it reaches the appropriate point and then proceed deeper into space where it will gather information vital to future crewed missions.

Inside the Orion's stage adapter or OSA, are 10 shoe-boxed sized CubeSats. These CubeSats will deploy from the OSA at strategic locations after the Orion spacecraft separates and has reached a safe distance. At that point, each of the "secondary payloads" will carry out different science and technology functions while in deep space.

The NASA crew was excited about the launch, posting on Twitter:

"The Space Launch System has roared to life, launching the @NASA_Orion spacecraft on its journey for Artemis I! Look out, Moon, we are on the way!" 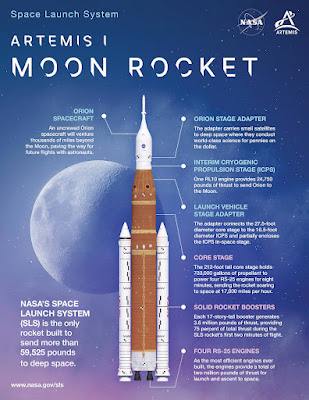 As a Sci-Fi Romance author, I'm enthused about this big step forward and the future technologies and advances it could present. Our space program has made huge contributions to society in terms of  technology, communications, medicine, and agriculture, just to touch on a few areas.

In addition, the Moon could provide a lot of resources to our home planet including Helium-3, a fuel that is rare on Earth but much more abundant on the lunar surface. One of the goals of future missions to the Moon could be to map these deposits for mining potential.

If you missed the launch and you'd like to view it, you can see it here:

(To skip the prelims and go directly to launch, advance video to 5:20)

Here's a follow up mission update from yesterday that also summarizes the mission. Well worth a watch.

Wishing You and Yours

and many good wishes for the coming week.