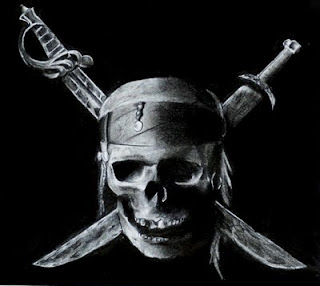 Pirates are very much a part of Halloween lore as well as SFR world-building.  Pirates are swashbuckling rebels and rogues who assault other ships (whether space or high seas) to acquire their treasure.  They are generally viewed as dark heroes in our society, the Robin Hoods of the High Seas.

But I'd like to talk about another sort of pirating--the pirating of e-books.

There's a lively discussion on the Amazon Romance Community right now called Authors Behaving Badly.  It criticizes authors who react very emotionally to the subject of potential piracy of their work.  Sometimes writers have a knee-jerk reaction to the topic that makes them seem uncharitable, but there's a good reason why their tempers flare on this subject.  Their very careers are on the line.

How would you like to be in a situation where you must work for a full year to produce a product before you get paid, and just when your paycheck comes due, you're informed someone liked your product so much that they "borrowed it and passed it around."  Now your boss can't pay you most of your back wages because your work is available for free from those who admired it so much they "shared it with the world."  You've got bills to pay and you were desperately counting on that income...and now you've been robbed.  And your boss may have to fire you on top of it, because you didn't produce profit for the company. Would you be upset?

Darn right, you would.

Yes, I'm oversimplifying the situation, but I'm trying to put this into perspective for people who work regular jobs and expect to get paid for their efforts on a regular basis.

Some readers are adamnant that sharing an e-copy of a book is both acceptable and legal, and in some cases they're right.  They are deeply offended by authors who claim they are "stealing" from them.  While readers see sharing of e-files as no different than sharing a favorite book with friends (which most authors endorse because it creates buzz for their work) or buying a book from a used book store, in the e-book industry, it can be very, very different.  Because one hard copy of a book loaned to a friend or two is not a problem, but one e-book downloaded to ten friends, and then shared with ten of their friends, and ten of theirs, etc. becomes a monstrous snowball.  And one copy shared through an e-book piracy site is a calamity for a writer. It's often catastrophic because it can impact the author's sales to the tune of hundreds, and maybe even thousands of copies.

So?  Says the reader.  Is that really a big deal?

Yes, it is.  Because in the electronic age a book can be "cloned" and all those potential buyers who are not acquiring from a legitimate source and paying the fee for the book impacts the author's sales figures, not to mention the author's royalties--the "salary" they receive for the thousands of hours they've invested in getting the book written and published.  Ultimately, the publishing house may have the writer "walk the plank" for such poor sales. Even though hundred of thousands of people are reading and loving their books, it doesn't show in the sales numbers.

So everyone loses when readers acquire books through mass sharing, which is usually via an e-book pirating site.

The reader's favorite author suffers career damaging loss of sales and may not be back with another book.

The writer, who (speaking as the voice of experience) has invested at least a year or two of blood, sweat and sanity to write, revise, pitch, sell, edit and promote a book (during which time they don't receive one red cent) may lose a lot of money in spite of all her hard work and the book's popularity.  And their reward may even be that they never sell another book because the sales don't show they are marketable.

The publishing house loses because its profits are impacted and it may not even be able to stay in business.

Yet, like the pirates of lore, these e-book pirates are seen as some sort of dark heroes because they are pillaging their favorite authors and offering their booty for free.

I hope this article will help readers better understand the cries of rage and pain being heard from authors who fall victim to these e-book pirates.  I also hope they'll help join the effort to scuttle these sites by not acquiring or sharing e-books through them.

The best way to show support and admiration for your favorite authors is always to buy their books new.  And don't forget, right after Halloween comes the Holiday shopping season.  Buy books as gifts!  :)
Posted by L. A. Green at 11:37 AM