AT THE END OF MY GOLDEN ROAD, IT'S ALL ABOUT THE JOURNEY 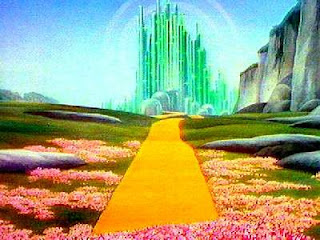 I’ve been back from the RWA National Conference in Los Angeles for the better part of a week now, and I’ve had a chance to recover from the excitement and the late nights and the jet lag (and the, ahem, alcohol). I expect Laurie will give you all a full report of the conference in her blog entry on Monday. But for me, of course, this conference was special because I saw it through the eyes of a Golden Heart finalist.

From the time you’re named a finalist until the winner of the coveted statuette is selected in the closing ceremony at National (some four months of anticipation), your life is a swirl of chaotic activity. There are dozens of tiny details to take care of—reservations to make; tickets to buy; dresses and shoes to choose; do you like this name for the group or that one, this design for the pin or that one; sign up for groups and guest blogs and retreats and meetings and pitch sessions with editors and agents (and don’t forget to do them!); take advantage of your new status by querying every agent who has ignored you in the past three years and everyone else you can think of.

Does it sound like I’m complaining? I’m not. It’s wonderful. But it can make your head spin and frequently does. I think I walked around for most of the four-month reign of my Golden Heart status in a kind of fog.

This class of Golden Heart contenders was a warm and very congenial bunch, who bonded right away on their own online loop. Many of them had risen to this honor through a firestorm of trial and tribulation, so we chose a name for ourselves to reflect this: the Firebirds.

But there are those who won’t understand what Golden Heart is all about, no matter how many times you explain it to them. You know, the friends or family members who seem to carry their own chorus of crickets to chirp on cue in the silence when you mention your writing, or GH in particular? I had folks who just couldn’t wait to hear and kept asking me how it went in L.A.—long before I ever got there.

Of course, a major pay-off for any writer lies in the recognition she receives for her work. A final in the Golden Heart contest represents affirmation; it’s a sign that other writers have read your work and seen some portion of greatness in it. That can be an incredible boost.

The very week I got the call from RWA that my manuscripts had finaled, I was doing one last editing pass in preparation for submitting them to an e-publisher. I had given up on my dream of ever finding an agent and taking a shot at what are now known as the “legacy publishers”, the major print publishers in New York. That still may not happen, but with two Golden Heart finals, I had another chance to make a run at that old dream. I did find the Golden Heart opened doors that had been previous closed to me. Two big agents responded to my query who hadn’t bothered before and ended up asking for the full manuscripts to both novels. One is still considering. (Evidently, though, no number of accolades could persuade some agents to try me. I got several rejections and a lot of silence.)

Once you get to the RWA National Conference, many people go all out to make sure your experience as a Golden Heart finalist is a good one. It is true that people will notice the special pink ribbons you wear identifying you as a finalist and congratulate you in elevators and hallways. The Golden Network, an online group of present and former GH finalists, organizes a terrific all-day retreat for the current class at National.

Whew! That’s a LOT of talent to marshal to our benefit, in such an intimate setting. We got a chance to be up close and personal with these giants of the field of romance publishing and to ask them the questions that really mattered. So when Kevan Lyon, with whom I had a pitch session on Friday, said that she really didn’t care much for science fiction romance, I had the opportunity to approach her personally during the break. Was I wasting her time and mine to pitch her with my SF suspense romances, even though they had both finaled in the Golden Heart?

Well, no, she said. Maybe you’ll be the one to change my mind.

I pitched her on Friday and got a partial request. It remains to be seen whether I can change her mind.

My other pitch session was with an editor at Tor/Forge, the SF publishing house which will be coming out with our own Sharon Lynn Fisher’s Ghost Planet in October. The editor was very enthusiastic about Sharon, about SFR in general and about my manuscript, Unchained Memory. She asked for a full.

I was grateful to have Sharon’s support as my plus-one at the awards ceremony, as well as the ever-steady Laurie and her husband David. I had managed to remain calm the whole week, but by Saturday night that had evaporated into butterflies. I had no real thought of winning, mind you. The final round of judging, done by agents and editors, has much to do with marketability, and I have no illusions about the myths folk harbor about what a hard sell SFR is. But you can’t help catching what’s going around in a room full of hopefuls sending prayers out into the universe. It’s, um, highly charged! Thank heavens, the paranormal category was announced first, leaving us to watch the rest of the proceedings in relative peace.

We had a chance to “process” at the First Annual Samhain Awards Party afterwards, which seemed to be a huge success. And, then goodbye to all the great new friends we’d made—a wonderful bunch of women, the Firebirds—and home again.

So what’s next? Well, send out those manuscripts, of course. Keep working on the third book. Get a little further down the road, and hope I can change a few minds--and hearts--along the way.