Top Gun SFR - What is this New Category All About? 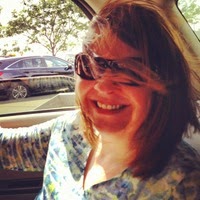 Recently I stumbled across an ad from fellow SFR-ist Pauline Baird Jones, talking about two of her titles that she'd bundled and dubbed "Top Guns in Time and Space."

Wait? What? That sounds amazing! I think Pauline may have just coined the name of an entire new SFR category.

The stories in the bundle are Out of Time, a time-travel/action adventure/romance centering on a World War II flying ace, and The Key, about a female Air Force pilot sent on a dangerous mission beyond the Milky Way.

I had to learn more, so I asked Pauline if she'd like to stop by Spacefreighters Lounge to talk about Top Gun SFR, and she graciously agreed. So Pauline, first of all, what sort of stories do you consider to be "Top Gun SFR" and how did you come up with this dynamite category name?

Pauline Baird Jones:  I spread my Top Gun umbrella pretty far, by including an ace pilot from WWII in my bundle, so for me, anything that deals with military pilots seems like a good fit. Because who doesn’t love stories about military pilots? They are pretty amazing. I wish I could take credit for the concept, but I was talking to my friend and fellow author, Cornelia Amiri about how hard it is to market a standalone book. 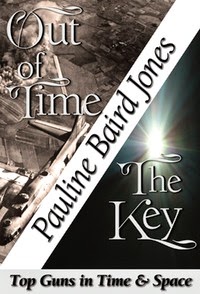 Out of Time is one of those books I wrote because I loved the idea, because I had to write it. Originally I had planned to write a follow-up, but lots of Life Happened. Lots. And Sara from The Key sauntered into my imagination, and well, it didn’t get written.

I haven’t totally give up on a sequel to Out of Time, but it’s on a long list. So there it is, all by itself. I was, okay, I was whining about it. LOL When you have a series, then the books in the series funnel sales to other books, but readers don’t always follow an author to their other books if they aren’t sure they’ll like the genre. If they have to step outside their comfort zone to read it.

When I first made the move from romantic suspense to science fiction romance, I contacted several of my core fans and offered them the book for free. A couple of them were quite dubious, but ended up loving the book. So it is challenging to get readers to try a new-to-them genre.

Then Cornelia had her genius moment. Which lit the bulb over my head. But…I wondered how on earth my designer would be able to bring such different-though-kind-of-the-same-books together on a cover. I think she did a great job and I’m eyeing the other pilots in my back list and wondering…

Laurie: I hope you do find other candidates for this new SFR category, Pauline. :)

I'm going to put on my reader hat for a minute and look at this from another perspective. Although your stories are set in different eras and might otherwise be in two different categories--Time Travel SFR and Space Opera SFR--at their core they have the two things that light up my sensor boards. Pilots!...in a SFR story! That's a big trigger for me to click the buy button, and I doubt I'm alone. I think it was a really cool idea to bring these two stories together and package them. That hooked me.

I also think that Top Gun SFR has the potential to bring some new crossover readers in from the Military Romance front. I read in both genres because I love the military culture and especially pilots (and ship captains, as an extension of that). They are brave and resourceful, often brilliant, make split second decisions and fly by the gut, but at the same time they must be responsible and dependable enough to trust with other lives and multi-million (or billion!) dollar aircraft or ships.

But they do very much have a mind of their own and that makes them rebels. And flawed. And totally fascinating. The name Top Gun SFR summons a visual of Maverick pushing the envelope in his F-14 Tomcat, and that has parallels to Han Solo, Mal Reynolds, and Starbuck.

Why are Top Gun personalities such a draw? Maybe because pilots (and/or ship captains) tend to be fearless and cocky and extreme risk-takers. Remember this great line from the movie Top Gun? "Your ego is writing checks your body can't cash!" Another exciting thing is that female characters can qualify as Top Gun personalities just as naturally as males, as your pilot in The Key demonstrates.

Pauline: Well, I know that I LOVE pilots for just the reasons you outline. I had a lot of fun creating a cocky, writing checks your body can’t cash, female pilot. LOL I also think we need heroes more than ever these days. I recently did a blog post about the transport of the future (I was doing it for fun—there may be a riding lawn mower in my future lol—but it ended up being more poignant than I expected.) When I was young we dreamed SO big! Our heroes were the soldiers and pilots—especially those amazing test pilots and astronauts. What a risk they took being the first into space and they jockeyed for it.

We love our heroes, military, police, firemen—all of those who stand in the path of danger for us. It was such an amazing experience for me to interact with the Greatest Generation when I was working on Out of Time. Their generosity in sharing their stories and answering my questions—well, not a shock from the men who flew into danger and saved the world. But what an honor. Looking back, I can see that it was kind of a natural segue for me as an author to go from ace pilots of WWII to pilots heading into the vastness of space.

I was recently at a SF con and one of the topics that came up was who would go to Mars? What would the Mars mission look like? There were some interesting comments, but I left thinking they totally missed the reality mark. 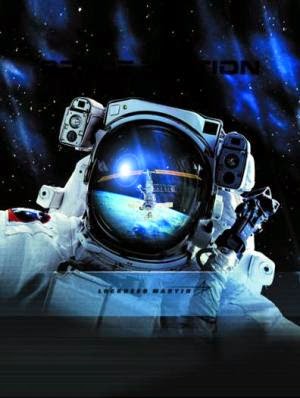 The first mission to Mars will have to be manned by the same type of people who made it to the Moon. Only when the path has been blazed (and the blood spilled), will the rest of us follow. That is the reality of exploration of any kind. First there is blunt force (and brave), then the next level of risk-takers, then then the settlement builders.

Because our society doesn’t seem to dream as big, I think it is critical for authors and other creators to keep that dreaming alive. And its important for us to honor the real-life heroes who stand between us and the very real dangers of the world.

So now we've identified the essence of Top Gun SFR. It's about those who dare--pilots, astronauts, mission captains, pioneers on the edge of space or time. Top Gun SFR honors this rare and extraordinary vanishing breed through characters who push the envelope and live on the edge. Heroes and heroines who "boldly go where no one has gone before" in spite of the perils and risks to them personally. This makes for an exciting, heart-pounding read and a wonderful reading adventure.

Pauline, thanks so much for joining us today for the unveiling of Top Gun SFR. I do believe this new category will catch on in a big way.

Now we'd like to hear from our readers. Tell us what other stories you've loved that you think would fall into the Top Gun SFR category?