AUTHENTIC SETTINGS A CHALLENGE IN SFR


One of the huge advantages of writing the kind of “hearth and home” science fiction romance I do is that I can send my hero and heroine to real places here on Earth.  That “grounds” my settings in a way that is impossible to do when I put them on a spaceship or alien planet.  I work hard to give my alien settings substance, but there’s just nothing like actually being there to give a scene authenticity.

I envy the RWA Kiss of Death (romantic suspense) chapter members their field trips at the national conference.  They always visit the coolest places in search of gritty realism for their novels—FBI headquarters, forensic labs, police shooting ranges.  Fellow 2012 Golden Heart® Firebird Heather Ashby, who writes military romance, is a U.S. Navy vet herself and still finds her way onto every ship she can to keep a sense of place.  Some people live in small towns—and write about small towns.  Some people know everything there is to know about New York City, and their novels reflect that intimate knowledge of the streets, back alleys and sky-high buildings of that city.

Those of us who write SFR tend to be science and space geeks from early childhood.  We seek out any opportunity, slim though it may be, to stand close to something, uh, space-y.  Field trips to an observatory, to the Smithsonian’s Air and Space Museum or, if we’re lucky, to see a launch at Cape Canaveral bring squeals of delight.  But you have to admit, we have greater challenges finding a way to immerse ourselves in setting details for planets that exist only in our minds.

That’s why, in a way, I “cheat” by setting parts of my stories here on Earth.  (That’s true of the first two of my Interstellar Rescue series, at least.  The third book, Fools Rush In, is set entirely in space.)  It helps me as a writer, but I think it also helps the reader relate to the story.  If some of the places are familiar, then a reader new to SFR might have an easier time accepting the introduction of more alien places and ideas.  Of course, my ulterior motive is to hook these new readers and draw them in.  If they like the first two books in my series, then I’m hoping they’ll follow me into the more alien territory of the third book. 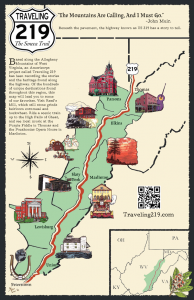 Meanwhile, outside forces are working independently to help me out.  Recently I discovered a website devoted to the history and culture of towns and counties along U.S. 219 through the Appalachians of West Virginia and southern Maryland (traveling219.com).  That highway is the back road my hero and heroine Ethan and Asia are forced to take to avoid the black ops kidnappers who are searching for them in Unchained Memory.  Now you can click on the link, and follow the route, learning about the history of the area as you read about places like Marlinton, where my lovers are holed up in a motel, or Elkins, toward the end of the route.

As my characters continue north, they enter the Adirondacks, specifically headed for a place called Big Moose Lake.  Yes, it really exists.  I’ve been there, as part of a road trip I took to follow their route.  I stayed at a bed and breakfast on the lake (in the book, they stay at his family lake house), in an area known for summer vacation homes.

I had come up with both the route north and the location of the lake house simply by looking at a map.  I knew West Virginia, having family in the area, but the Adirondacks were new to me.  All I had to go on there was a long-ago trip to my husband’s family place in upstate New York.  Luckily I have a good mind for the details of setting and an even better imagination for using them.  When I got to Big Moose, it was as if I’d been there before.  All I can hope now is that my readers feel the same way.

The journey for Ethan and Asia begins in Nashville, Tennessee, where I grew up and still have both friends and roots.  Nashville is the starting place for the hero and heroine in my second novel, Trouble in Mind, too.  It just goes to show that even if we’re writing science fiction romance about aliens and spaceships and faraway planets, we’re still grounded in our own experience.  It helps if we can make that experience as rich and real for our readers as possible.