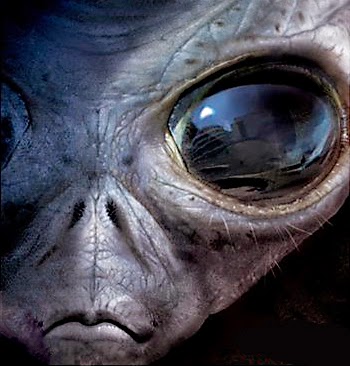 There are two distinct camps when it comes to thinking about how aliens might relate to humans should creatures from another planet ever come calling.

Many people believe civilizations advanced enough to travel the stars will have outgrown greed, violence and the various other evils to which human society is prone. This we may call the “ET” camp. In this way of thinking, aliens would be benign visitors, here to help us leave behind our lesser selves and progress to higher things.  They would bring technology to overcome disease and hunger and energy scarcity. They would show us the way to the stars. Some of those optimistic sentiments must be driving SETI, the official search for extraterrestrial intelligence, which has lately caused controversy by actively sending out a query to the galaxy.

If you check around the Internet, you’ll find slightly wackier websites devoted to this way of thinking, with testimonials from everyday folks who swear they’ve interacted with these extraterrestrial beings.  It’s all good, they say.  When the Earth is ready, the aliens will reveal themselves to the world and a whole new era will begin.

To which the members of the second camp reply, “‘To Serve Man’ is the title of a cookbook!” * For the folks in this group—let’s call it the “Starship Troopers” camp—no good can come from interaction with a civilization much more technologically advanced than ours. Just look at what happened to the Native Americans, or the tribes of Africa, or, well, any indigenous people in the world when they encountered the technologically superior Europeans. According to these thinkers—Stephen Hawking, for example—technological achievement does not necessarily mean emotional maturity.  We’re just asking for enslavement/destruction/exploitation if we seek out contact with alien cultures.

Me, I tend to think, like everything else, there are probably good aliens and bad aliens. That’s the premise behind my Interstellar Rescue series. An empire of slave-trading aliens regularly exploits Earth by abducting humans. An interstellar organization of abolitionists, both human and alien, fights the evil Grays wherever and whenever it can. That basic premise provides one overarching bunch of bad guys—much like the Klingons and the Romulans are always the bad guys in STAR TREK—and opens up lots of possibilities for storylines.

In Unchained Memory, my debut science fiction suspense novel launching February 24, the slave-trading Minertsan Consortium is certainly the underlying cause of all my heroine’s troubles.  But Asia Burdette can’t remember seeing one of the familiar little big-eyed aliens everyone calls the Grays. They remain hidden throughout the novel, acting through agents or using mindwipe techniques to ensure docile slaves.

And, as it turns out, Asia has a whole different set of problems once the Interstellar Council for Abolition and Rescue returns her to Earth. She’s the target of black ops kidnappers, men who have proven themselves willing to kill for what they want.  But what do they want?  And who sent them? Those questions are the central mystery of Unchained Memory. The answers supply a villain the heroine and her hero, Ethan Roberts, must overcome on their way to what we hope will be a happy ever after ending.

What, you thought I would tell you who that villain was? Nope!  No spoilers! Unchained Memory launches Tuesday, February 24 on Amazon.com.

*A reference to a classic TWILIGHT ZONE episode in which supposedly benign aliens land on Earth and entice humans to visit their lovely planet.  In a typical Serlingian twist at the end of the episode, as people file happily onto an alien ship, the lead character discovers that the book the aliens all carry, “To Serve Man”, is a cookbook.


TELL ME WHAT YOU THINK—WIN BIG!

So, which camp do you fall into—ET or Starship Trooper?  Think aliens would all be nice guys, or would they like to have us for dinner? Or, more seriously, do you support SETI efforts to reach out to the galaxy, or do you think it’s the dumbest thing ever to let aliens know we’re here?  Comment, giving us your thoughts, and we’ll put your name into a random drawing for a free Kindle copy of Unchained Memory! Included with your free gift will be a signed 5½” x 8 ½” cover card suitable for display! The winner will be announced in next Friday’s blog.
Cheers, Donna