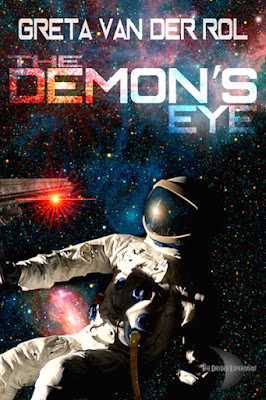 Here it is, everyone. The cover for my new science fiction romance novelette, The Demon's Eye, done by Dreams 2 Media. Thanks, Rebecca. Available soon at an e-store near you.

Krystina Merkos is reluctant to leave her home planet, but agrees it's best that her father doesn't have to concern himself with her safety while he fights a civil war. The journey on an Imperial warship becomes much more palatable when she discovers that Ben Paulsen, an old flame from her high school days, is a senior officer on the ship.

But it's not all plain sailing. The captain wants to seduce her, Ben's trying to keep his distance – and pirates want to sell her to the murderous sect waging war on her father.

When the frigate is attacked by a pirate fleet intent on capturing Krys, she faces impossible choices. If she hands herself over to the pirates, she will die a painful death. If she doesn't, everyone will die.

Unless she and Ben can contrive a way out for them all.