THE PULL OF DARKNESS: DOROTHY VS. THE WITCH


One of the great pleasures of having grandkids is sharing your treasures with them. Last weekend I got to watch one of my favorite movies, THE WIZARD OF OZ, with my nearly two-year-old granddaughter. What fun!

Now, some of you may be thinking she would be scared. Flying monkeys! Evil witches! Talking trees!  Not my little warrior. Wanna guess who her favorite character was?

The Wicked Witch of the West.

At some point the witch did something appropriately evil, and I commented,” Oooh, she’s mean!”

My little angel turned to her mom and said, “I mean. I the witch.” She was quite proud of herself, too.

Rather than think my granddaughter has self-esteem issues, I was amazed at how smart and perceptive she was. She’s not even two, and she could tell who held the power in Oz, at least for 90 percent of the film. Forget Dorothy, who for most of the film was too polite, too afraid and just plain not assertive enough to take that power. My daughter’s little girl wanted the power. “I the witch!” 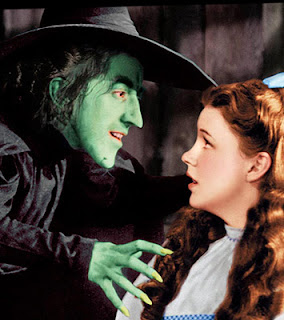 Of course, she’s too young yet to recognize that the whole point of THE WIZARD OF OZ is that Dorothy must come into her own. As the protagonist of the story, Dorothy must grow, and, like her companions, gain courage, heart and intelligence enough to use the assets she has (the ruby slippers) to reach her goals (to get home). That is what makes this great drama in the guise of a children’s story. The protagonist, an ordinary person in every way at first, grows and evolves into a true heroine.

In modern literature and drama, we seem to be in danger of missing this point. Like my granddaughter, we’re far too enamored of the dark side, thinking it holds all the power. The last two literary bestsellers I read—Gone Girl and The Girl on the Train—featured protagonists who were not only unlikeable, unreliable and morally questionable, but who also failed to change and grow. Popular and award-winning television shows—THE SOPRANOS, BREAKING BAD, SONS OF ANARCHY, MAD MEN—follow the same pattern. We watch the characters in these shows like we watch a slow-motion train wreck, hoping for redemption or salvation, only to be disappointed. In the end these protagonists fail to learn anything from their actions.

Even in our own genre, we skirt the edge of this fascination with the darkness. Our heroines must all be kickass from the beginning, our heroes alpha enough to take them on. Allowing for growth and change in those circumstances is a difficult job of writing. It means we must allow for vulnerability somewhere, for internal obstacles to be overcome. Too often a writer will handle this by avoiding the need for growth at all. The kickass heroine stays the same throughout the book, yielding a character made of cardboard. Alternately, our strong couple turns to goofy mush once the romance starts. That’s no solution, either. Real flaws in a character can only be healed by the character’s real work throughout the book. Just like in real life.

Of course, you could say that all this obsession with the darkness in our literature and our media entertainment simply reflects our culture. But it also shapes our culture. Hard to say which comes first. As a writer, if I’m in the business of leading readers in one direction or the other, I say let’s follow the light. I want my characters to find their brains, their hearts, their courage, and use what they have found to get themselves home.

And not too long from now I’ll hear my granddaughter say, “I’m strong and smart. I’m Dorothy!”