All Things Are Easy...: Words that Stand the Test of Time

I like to watch CBS Sunday Morning each week, because it features news stories of things or people that are remarkable or fascinating or have something to say in an unique way. These stories often lead me on a web-surfing safari to discover more.

Today, they featured a peice on members of a stone carver family who are responsible for the lettering on many of the USA's most prominent monuments, including the World War II Memorial and the inscription of a quote on the granite wall at the President John F. Kennedy's gravesite.

In the news article, Nick Benson, "the slowest writer in Newport, Rhode Island" who "averages just two letters an hour" is literally writing in stone. He talks about being driven to do what he does, a sentiment most writers can completely relate to. He speaks of how he knows he is creating words that will be viewed by millions and will last for centuries. And is that not the fondest wish of every author, everywhere?

But that's really not what this blog is about, though it does share a similar theme. It's about what I discovered when I started researching one particular quote. It's about words that stand up to time.

At the end of the article (not shown in the above video) was a phrase that was literally set in stone:
"All things, before they are easy, are difficult."

Those words really spoke to me, possibly because of where I am as a writer at this moment in time. It's a reminder that nothing worth having is going to come easy, but offers the promise that some day in the future, if I keep at it and tackle the beast, the things I'm finding very difficult now will begin to come easier.

I wanted to find the originator of this quote for my blog, so I turned to a trusty Google search to track down the origins. That search ended up leading me through many centuries and across several continents. I never found the originator of that particular phrase so I could properly give credit, but I did find something else. A treasure trove of incarnations of the same thought that have echoed through time and history.

And this ended up being the subject of my blog, discovering the words that may have outlasted even the deepest cuts of a stonecutter's chisel.

Thomas Fuller was an English historian and prolific author, who was one of the first writers who was able to make a living from what he wrote. (Wow. Had I just uncovered one of the first professional authors?)

In October 2012, Marlo Thomas quoted Fuller on Facebook. The post acquired 869 Likes and 73 shares. These eight words from some four hundred years ago seemed to speak just as clearly to a modern social media throng. 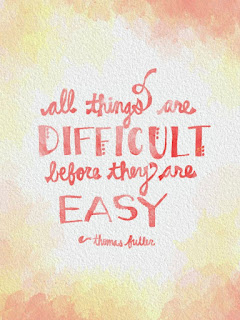 "All things are difficult before they become easy.” – Saadi, one of the major Persian poets of the medieval period.

And a slightly longer version also credited to Saadi:


"Have patience. All things are difficult before they become easy."

Born in Shiraz, Iran circa 1210, Saadi is widely recognized as a great classical poet. He was even quoted by President Barack Obama in a 2009 speech. His best known works are Bustan (The Orchard) completed in 1257 and Gulistan (The Rose Garden) in 1258.

"All things are difficult before they are easy." -- Chinese proverb.

Ironically, this exact phrase has also been credited as both an English and an American proverb.

"All beginnings are hard." --Telugu proverb.

The Telugu people are a South Asian ethnic group with roots dating back to 232 BC.

"All things are hard before they get easy." -- Duane Roth

Roth, a late San Diego philanthropist, is credited with saving Connect, a not-for-profit organization that encourages technology entrepreneurs, among many other accomplishments. He died after suffering injuries from a bicycling accident on August 3, 2013.

"All things get hard before they get easy." -- accredited to Star Wars Episode 1 Racer

This is apparently a Nintendo video game. It was just one of those random Google results that led me to someone's amateur Youtube video of playing a video game. I'm not sure if the quote is actually spoken in the game episode or not, but I'm including it because...Star Wars! (I'm not including the link because it contains some very coarse language among the players that may offensive to some readers.)

This quote turns the thought a bit inside out, but I thought it was an interesting perspective to include. Instead of saying things will be hard before they get easy, it's saying that you should start with easier things before graduating to harder tasks. Tao Te Ching is believed to have authored the text that became the basis of the philosophical religion of Taoism.


"Most of the things worth doing in the world had been declared impossible before they were done." - From the 50 Impossible Quotes post on Joel Runyon's IMPOSSIBLE site, a site dedicated to helping people "do something impossible."

"Easy is in the eye of the beholder." --MathFour, Bon Crowder's math tutorial site for parents.

A form of the phrase even made it onto at least one modern product, a 14" MacBook carrying case.

These quotes are all expressions of a similar thought, but the different word arrangements, patterns or rhythms may speak to different individuals in different ways at different times.

My favorite? Well, it's the first, the stonecarver's version. I love the rhythm and the stately nature of the phrasing, which in my mind is the most positive of all these similar thoughts. It offers encouragement first--"All things, before they are easy"--followed by the acknowledgement that the journey to get there may be a rough road--"are difficult."

Do you have another favorite? Let me know which of the phrases you prefer in comments below.

Happy Holidays!
Today we kick off Seven Weeks of the Season Holiday Celebration, where a random commenter will be chosen to receive a special gift on selected posts right up until the December holiday. It's just our present to you for visiting Spacefreighters Lounge.

Cheers, good luck and have a great week!