There's Been an Awakening (Spoiler Free Thoughts on SW:TFA) 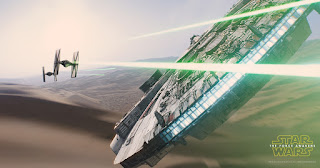 Rest assured. Star Wars: The Force Awakens didn't suck. It delivered on the pre-release hype with cheering audiences and box office smashing records we might not see again. For those who feared too much had been revealed by the trailers, trust me, you ain't seen nuthin' yet. They were very cleverly crafted so that they barely scratched the surface of the tale, which is a fast-paced, eye-popping adventure delivered in classic Star Wars style.

And all the details were meticulously done. The sets, the ships, the costuming!! Mwah! Absolute perfection.

But that's not to say the film didn't throw some huge curves that fans are going to find difficult to accept. You know what? Great sagas do that. Because in epic sagas, not everyone can have a HEA.

The newest film in the franchise provided the same winning blend of gaffaw-worthy humor and dark (make that soul-crushing) drama, with a delightful reintroduction of some old favorites (all of which drew a huge audience ovation at our viewing) and some dynamic new characters.

It also brought back a wonderful, nostalgic experience that harkened back to the glory days of A New Hope--a strength that totters precariously close to being a weakness, because the result is that the experience may be a little TOO close to the original. Everything that's old is new again, indeed!

And then there's the Black Moment. (OMG!)

I have to admit, upon walking out of the theater only a few minutes after the end of the film, I was still in major shell shock. I had no idea how to critique the movie. I wasn't even sure I wanted to see any more Star Wars movies. I didn't even know where to start in summarizing my feelings.

Fortunately, we sponsored a Star Wars chat event where I was able to work through my emotions with many others who'd viewed the film, giving me a chance to come to terms with my state of woe. (If you've seen the film, you can request an invitation to the chat via the Science Fiction Romance or SFR Brigade FB groups. The chat event will be open until New Years Eve.)

I think I understand now why the story took some of the turns it did, and the speculation on the whys and wherefores is fascinating stuff that only served to deepen the lore. I'm at peace now. And I will definitely be back to see the balance of the series. In fact, I now plan to view The Force Awakens at least one more time.

Since everyone is well acquainted with the old guard--Han, Leia, Luke, R2D2, C3PO, and the Millennium Falcon, all who return in TFA--let's take a closer look at the new characters.

Rey
Oh my, my! What a dynamite female role model for a new generation of new SW fans, as well as a breath of fresh air for old devotees. She isn't happy to step back and let the men handle the conflicts, she's a tough, competent, and oh so likable.  Not that Leia and Padme didn't do their fair share of fighting, but Rey is no pampered princess or queen. She's a hard-scrabble survivor left to fend for herself under circumstances that were only hinted at in this first installment of this new trilogy. And she's a natural. In the same way that The Natural was a natural at baseball. That's part of the mystery. Enough said. No spoilers. (I hope Pippa will chime in more later on the awesomeness that is Rey.)

Finn
A disaffected Stormtrooper turncoat who doesn't even know his own birth name, Finn is a bit of an anti-hero who is swept up in something much bigger and badder than he reckoned on. Merely by circumstance, Finn is forced to join a desperate struggle for survival alongside forgotten legends and impassioned new recruits. Except we all know that, in this universe, nothing happens by circumstance. Destiny will find you. It's obvious Finn has a connected backstory too, and it will come to light in the continuing story.

Poe
He's the Wedge Antilles of this new era, but with a bigger role and a stronger voice. Poe is a confident crack pilot with powerful instincts and unshakable, but not infallible, dedication. He's the face of The Resistance, which is the reincarnation of The Rebellion. Every generation has a story, and every generation needs its dose of swagger and bravado. Poe fills that gap. I hope to see a lot more of his character later.

BB8
The adorable, little beach ball drone sidekick, property of Poe who is acquired by Rey due to a twist. (I'm sorry, does that sound vaguely familiar to you?) BB8 is being hunted by the powers-that-be. (Ooops. Hmmm. Where have we seen that before?) Although I thought BB8 is great, he's no R2D2. R2 has a certain dignity and bearing that the little rolypoly fellow just can't emote. What he is, is a very cute little addition to a pair of much-loved drones. What's that saying about three being a crowd?

Maz
Maz left me a little puzzled. Her role is...odd. And her contribution felt strangely truncated. I'm not sure how she is supposed to fit into this elaborate jigsaw, and I suspect her part might have been cut down from the original script. Some of her wondrous lines in the trailers were never uttered in the film. This left me with a lot of questions. Why is she there and what made her such a trusted archivist? Maybe her place in this universe will be more fully fleshed out in future films.

So that's it. That's all you get. I would rate this film somewhere between four and five stars--a brilliant, shining, if somewhat flawed, jewel in the crown of the mighty, mighty Star Wars epic.

Go see it, you must!

Have a great week, a very Merry Christmas and/or a wonderful holiday!
Posted by L. A. Green at 3:00 AM